Have The Cowboys Learned From Past Contract Blunders?

Share All sharing options for: Have The Cowboys Learned From Past Contract Blunders?

Following last week's post about the Cowboys cap hits per position group, the primary topic of discussion (with the offensive line a close second) became Orlando Scandrick's $7.7M cap number. A great deal of interest surrounded the reasons for his dramatic pay raise.

In fact, Scandrick will count more against the 2012 salary cap than all of the other corners on the roster combined.

On further inspection, however, it appears that the Cowboys restructured Scandrick's deal on March 13, during the great salary purge of 2012. His cap hit for 2012 has thus been reduced to a more manageable $2.98M (in the neighborhood of Keith Brooking's salary from last year).

Rationalizing this fact is difficult for many, among them those who feel Scandrick was more a part of the 2011 secondary's problems than the 2012 secondary's solution. Nonetheless, Scandrick was the only major contributor at corner re-signed this offseason (assuming they don't eventually re-sign Ball), so the potential insight his contract offers is invaluable in evaluating the policies of the new regime.

Are the Cowboys still a team pushing guaranteed money into the back ends of contracts, dooming future salary caps to bloated contracts and cap penalties, or are they now a team oriented toward the future--sensibly structuring deals that allow them to cut ties with little obligation? By analyzing some of the Cowboys recent signings, we'll learn the answers to these and other questions.

First, we'll take a look at the contract that had Cowboys nation talking: the Scandrick deal. 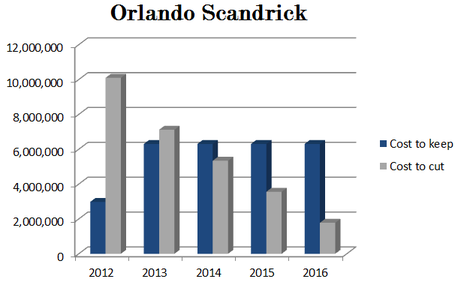 *Scandick's annual salary has not yet been disclosed, therefore the year 2013-2016 costs are an average of the remaining money on the contract, plus the prorated signing bonus.

From a purely financial standpoint, what does this graphic mean? Essentially, you expect the player to perform to a level corresponding to, or exceeding, his blue bar. However, if his play falls short of this, the next measuring stick is the gap between the blue and silver bars. If a player is performing so poorly that he isn't worth the money saved by cutting him (the gap), he should feel rather uncomfortable about his job security. The bigger the gap, the more pressure on the player to perform, and the more freedom the front office has in fielding the best possible team.

Scandrick could be cut in any of the last three years of his contract without inducing penalties exceeding his cap hit (in other words, no Roy Williams-like save-money-by-keeping-him situation).

Now, let's have a look at the Dan Connor contract: 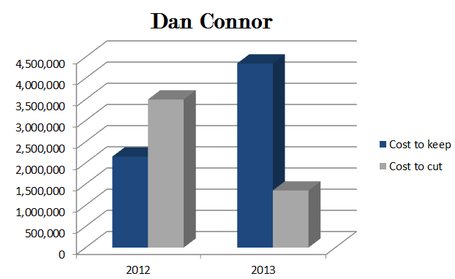 Many have speculated that the signing of Dan Connor to a "starter's deal" showed little faith in Bruce Carter. This diagram shows otherwise. Connor is safe this season, for certain. At $2M, he can be kept, even in a backup role, for less money than the ineffective Brooking and James tandem from last year. This year is also make-or-break for Connor. In 2013, his salary skyrockets to true starting money, and the Cowboys could save a healthy $3M by cutting him - enough to start working out an extension for Sean Lee or Bruce Carter. 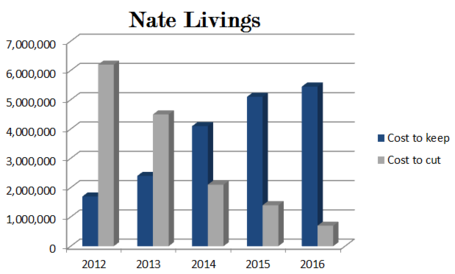 Another presumed "starter deal," the Livings contract had many Bengals fans jeering as the Cowboys were presumably anointing their outcasts (perhaps they've been unhappy with ours?). Closer examination reveals that the Cowboys aren't taking many chances on Livings. In fact, he's making less than Kyle Kosier did on his discount deal last year. Each season, he's being expected to show significant improvement, eventually working himself up to a starter's salary. More realistically, he'll reach his ceiling in the first two seasons and be restructured or released prior to the massive jump in and of the years 2014-2016. 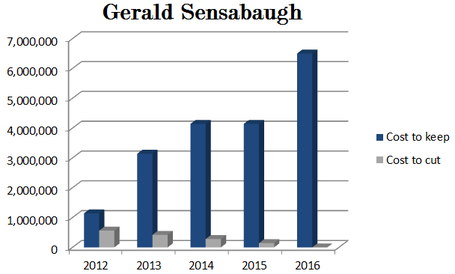 You've seen this before. Gerald Sensabaugh was also given a sizable deal, again to the chagrin of many fans. Looking at the breakdown, however, shows that Gerald will be making near the veteran's minimum this season. In every year of his contract, he can be cut without looking back. He won't see 2016 unless he becomes some sort of Polamalu clone. 2013-2015 are all prove-it years for him. 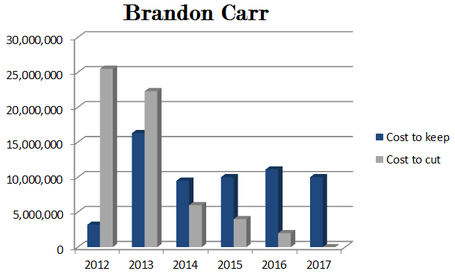 To end on a positive note, let's take a look at a deal many of us were happy to see. The fact that Carr saw almost half of his deal guaranteed scared many. On further inspection, it turns out that the majority of the guarantees were the first two years of the deal. Due to this, after next year's exorbitant salary, Carr will be as motivated to perform as Scandrick or Sensabaugh, as his high salary and low cut penalty will make him an easy target if things don't work out.

How do other teams structure their deals? I thought it'd be nice to offer an example of a poorly structured contract. 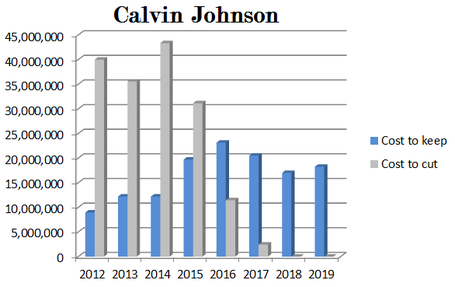 As you can see, this deal has Detroit at the mercy of Megatron through 2016. Even though there's a sizable positive gap in 2016, the penalty is still an incredible $10M+. Also, I'm not an ace with contract language, so I'm unable to explain why there's no penalty in either of the last two years, or how the $20M option bonus in 2013 is accounted for (I added it over the span of 5 years, as Spotrac has it).

As we've now seen, the Cowboys front office has apparently learned from past mistakes (primarily, backloading guaranteed moneys). They've shown a tendency to give smarter contracts, featuring backloaded salaries, smaller signing bonuses, and guaranteeing the first one or two seasons' contracts in order to compare, at a glance, with other, less frugal, contracts. The Cowboys are showing a reluctance to place too much faith in new players, instead giving them contracts that force them to prove their worth every season.