Just a couple of days ago, I posed the question: have the Cowboys learned from past contract blunders?

Related: Have The Cowboys Learned From Past Contract Blunders?

A number of you insisted, and rightfully so, on an actual comparison of the bad contracts the Cowboys recently jettisoned with the newly issued ones that I actually presented.

Excuse me for scratching at old wounds, but here they are: 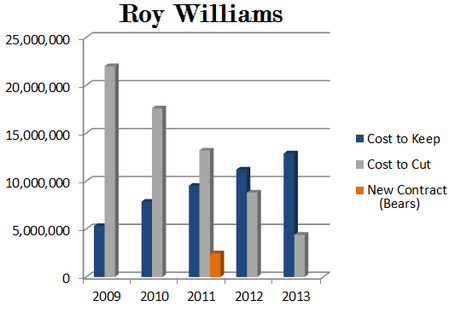 Owch. Now, let's see what makes this deal so bad--after the jump.

Please be aware that the exact details of these contracts are somewhat difficult to ascertain, so some numbers may be a bit off, accounting for roster bonuses or option bonuses that make up the total value of the deal. I've done my best to combine all of these elements into a simple keep/cut cost analysis. This model, in the case of roster bonuses and incentives, won't hold for mid-season cuts. It represents the cost to play them for the year, or cut them before the roster bonuses hit.

Geometrically, this graph resembles those of other deals the Cowboys have recently signed. In fact, this is true of essentially all deals in the NFL. The guaranteed money goes from high to low, and the actual cap hit goes from low to high. Can you spot the huge difference (ignoring the orange bar, for now)?

Look at the relationship between the blue and silver bars. For the first three years, the silver bar is larger than the blue one. That's it. The total penalty of cutting the player exceeds the cost of keeping him on the roster for that year.

As a side note, in most situations, the salary cap space will in fact grow due to a cut despite the cap hit exceeding the salary, but the pro-ration of the hit is still significant, and deserves to be viewed as a whole in order to preserve perspective.

In every single recent deal that I reviewed, the silver bar was eclipsed by the blue (in other words, the Cowboys could save money by cutting the player), by the third year. This way, if a player doesn't work out, they can be cut after year two and the club can save money and start nursing their wounds.The Cowboys grew weary of Roy well before this critical event took place, causing serious financial repercussions. A simple mantra - never sign a player if you can't cut him after two years.

Now, let's take a look at the second problem with this deal. That little orange bar. As noted in the graphic, that tiny bar represents the total cost of Roy Williams to the Chicago Bears. That bar isn't all that little, representing over $2 million. The problem is in perspective. That bar is dwarfed by the cost that Roy would have commanded from the Cowboys, had he remained on the roster. Roy Williams market value was significantly lower than his compensation. Not only is the structure of the deal off, but the entire scale of the deal is far too large.

Now look at the bar for 2012. What bar, you ask? Exactly. Roy Williams isn't even under contract for 2012, despite being available. Roy Williams was scheduled to count $11,202,000 against the Cowboys' 2012 salary cap number, at a time where not one team in the NFL believes he's worth a contract of any value.

The Roy Williams contract was not the best of deals for the Cowboys. And this evaluation is completely independent of the trade. 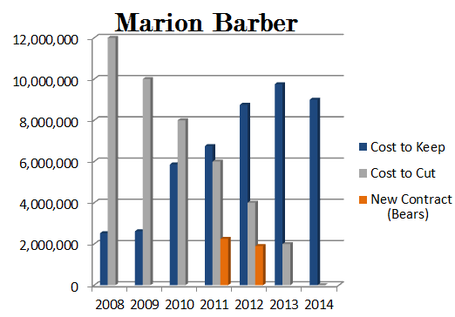 Marion Barber isn't as polarizing for Cowboys fans as our last example. Many feel he played hard for the Cowboys and is deserving of our fond memories more than our regret. For those of us who regret, the above graphic explains why.

Again, we note the silver bars. The Cowboys, at the time of this signing, were banking on Barber maintaining or increasing his production over the next three years, at a bare minimum, before parting with him became even a remote possibility. This damaging logic was the primary flaw in the "old system" (assuming you buy into the notion that the culture has changed).

As a positive note, and consistent with the fact that Barber retains some respect among the Cowboys' fan base, is that Barber managed to remain a Cowboy until cutting him was more economically feasible.

Other significant notes are that Barber retired from the NFL before his contract with the Cowboys would have expired, and the contract he received after leaving the Cowboys was for an amount and length closer (though not nearly matching) to what was remaining with the Cowboys. With this in mind, it would be fair to say that Barber's contract, while still overvalued, was not as poorly constructed as Williams'.

Would you believe me if I told you that there was a deal in recent history worse than the Williams deal (trade terms not withstanding)? Behold: 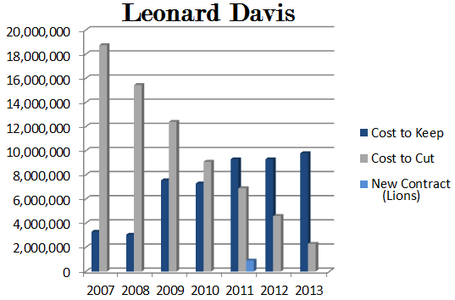 Keep in mind with these deals that the market value of free agents has steadily increased. In 2007, the salary cap was $107M. The $120.6M for 2012 represents a significant increase, and helps to frame exactly how large these contracts are relative to current deals.

Now, what's so bad about the Davis deal? First of all, this contract puts the Cowboys at the mercy of Davis for a whole four years before any semblance of freedom returns to the front office. This came about in 2011--which is when we promptly released him.

Davis' actual value, as shown by the contract he received once released, was shown to be approximately 11% of what the Cowboys were scheduled to pay for him. There isn't much to be said for this contract. The Cowboys paid maximum value for, arguably, the top free agent offensive lineman, and then stashed him at Guard, although he had previously played Tackle.

How's this compare to today?

The Cowboys have apparently changed their previous tactic (if you can call something so disadvantageous a tactic) of signing deals that essentially marry them to the player, in favor of commitments that, while reflecting market value, don't allow the player to get so comfortable as to become complacent.

Additionally, the Cowboys recent aversion to top-tier free agents (with a few exceptions this year), has helped to keep them from over-scaling their contracts (which we saw with all three of today's examples). Even when signing this year's top corner in Brandon Carr, the Cowboys only paid him $100,000 more than Cortland Finnegan received (a much older corner who will likely be cut or retire before the completion of his deal)--a sign that the Cowboys' negotiation practices have become somewhat less reminiscent of Southern Hospitality.