Cowboys Key To Success in 2012 Is Improved Passer Rating Differential

Share All sharing options for: Cowboys Key To Success in 2012 Is Improved Passer Rating Differential

As a football fan, you've probably heard mantras like "defense wins championships" or "offense sells tickets, defense wins games" literally hundreds of times. Heck, you may even believe those mantras. But just because something is repeated again and again doesn't mean it's necessarily true. Especially not lately. Here's a look at the four worst pass defenses last year as measured by passing yards allowed. Notice that the table contains the two Super Bowl participants and two other teams that made it to the divisional playoff round.

The Patriots and Packers defenses were not just bad, they were historically inept. The previous NFL record for passing yards allowed in a 16-game regular season was held by the 1995 Atlanta Falcons, with 4,541 yards. The 2011 Patriots and Packers had the worst pass defenses in league history, yet combined for a 28-4 regular season record. Were these teams' defenses really that bad or are these numbers perhaps a little misleading? After the break, we look this in a little more detail and also try to figure out what this means for the Dallas Cowboys.

Last season illustrated clearer than perhaps ever before how dominant the passing game has become in the NFL, and by extension, how passing defenses have struggled:

And while the NFL and the people who are paid to report about the NFL have conditioned us fans to look at volume stats like the ones above, the number of yards you accumulate or give up has almost no correlation with whether you win or lose a game in the NFL. How much someone passes or runs for can make for nice anecdotal discussions in the context of fantasy football, but has next to nothing to do with winning in the NFL.

One way to look at that is by calculating the difference between a team's passer rating on offense minus the defensive passer rating. This passer rating differential effectively tells you how much more effective a team is at passing the ball relative to its opponents and, and it can be a very strong indicator of team strength.

Here are the top ten teams from 2011 as ranked by passer rating differential:

You think this is all some fancy-pants stat mumbo-jumbo without any real bearing on actual game results? Here's a simple graph that plots the Passer Rating Differential of all 32 NFL teams against their wins in 2011: 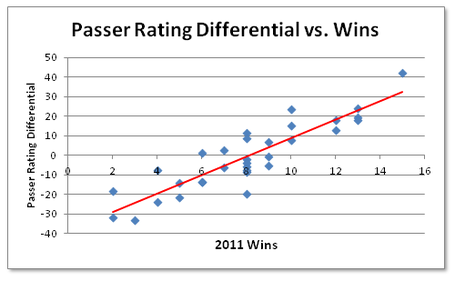 R² between PRD and wins in 2011 was 0.80, an astonishingly high correlation. It is almost as good as scoring differential (0.85) at predicting the W/L record of an NFL team.

Now for a little detour, just for fun. Here are some correlations with 2011 W/L records and a collection of other stats:

Back to the original question: were the Packers and Patriots defenses really that bad or are the stats misleading? The answer is: Both. Those defenses were atrocious against the pass. But being bad against the pass is, taken by itself, almost a non-issue. The correlation between passing yards allowed and W/L record in 2011 is 0.08 - virtually non-existent.

But a bad pass defense only remains a non-issue for a team as long as its offense keeps producing. The problem obviously is, once you manage to stop the Packers or Patriots offense, their defense will not be able to compensate.

The Cowboys' best chance for improving their W/L ratio in 2012 is to improve their pass defense. In fact, I would strongly advocate that the Cowboys spend at least their top three 2012 draft picks on defense, and I would not object at all if they spent all of their draft picks on defense. And really, the only question left is more of a philosophical question: Is the quickest route to an improved passing defense an improved pass rush or an improved secondary?