Share All sharing options for: Five Training Camp Battles For The Dallas Cowboys

Before the Dallas Cowboys training camp officially starts at the end of July in Oxnard, we get the benefit of 10 OTA practices and a three-day minicamp for rookies and veterans. The theme of these offseason activities, and ultimately the theme of training camp itself will be "competition", a point that Jason Garrett reiterated during rookie minicamp last weekend:

"We try to make every role on the team as competitive as possible."

1. Wide Receivers vs. The Depth Chart

Miles Austin and Dez Bryant. That's about as far as it goes at wide receiver right now. All bets are off as to who goes where on the depth chart after the first two guys.

Let's assume the Cowboys keep only five wide receivers, as they've done the last couple of years. That's three open spots on the depth chart for any of the following players:

Kevin Ogletree is entering his fourth year with the Cowboys and has all of 25 receptions to show for it. But he at least has some experience in the system. And to a lesser extent, so do Dwayne Harris, Andre Holmes and Raymond Radway. Add rookie Danny Coale to the mix and you already have five guys competing for three spots. And we can't rule out the four UDFAs yet either: Cole Beasley, Tim Benford, Donavon Kemp and Hakim Saalim are also going to compete, even though their ceiling is probably a spot on the practice squad, and not on the 53-man roster.

Three open spots. Nine Competitors. Each one of which will have to give it everything he's got to make the roster.

While the Cowboys only ranked 21st in penalty yardage (which is good), they still ranked fifth in the league with 114 penalties last season (which is not good). The Cowboys have ranked in the top ten in number of penalties for five consecutive seasons, a dubious distinction they share only with the Oakland Raiders. Outside of these two teams, the Rams hold the third longest streak of consecutive seasons in the penalty top ten with three seasons.

Jason Garrett knows this, and is making sure that officials will be present and officiating at each practice - the Cowboys even had officials at their rookie minicamp. Let's hope this helps.

3. Morris Claiborne vs 1st Round Expectations

The fourth question asked of Morris Claiborne at his first press conference as a Dallas Cowboy:

Last year, the number one pick, Tyron Smith, sat there and talked about having Hall Of Fame aspirations. Is your ceiling that high or are your goals that high?

Whoever asked that question, Jason, Stephen or Jerry should have stood up right then and there and punched the guy in the face.

Yes, Claiborne was the top defensive player in the draft. Yes, the Cowboys had him rated higher than any CB since Deion Sanders. Yes, they gave up a second-round pick to get him, but no, that does not mean he's a shoe-in for Defensive Rookie Of The Year, far from it. Here are the three defensive backs taken in the first round last year:

(Pick 5): Patrick Peterson - Four punt return TDs overshadowed what was a forgettable season as a CB, with only two interceptions and a -12.6 PFF grade that ranked him 102nd out of 109 CBs last year.

(Pick 27): Jimmy Smith - Started off the year with an injury but slowly played his way into the starting line up. Played on 243 snaps in 12 games, started in only three.

4. Stephen McGee vs. The Checkdown Pass

McGee is entering his fourth year with the Cowboys and needs to show that he belongs on the roster. The Cowboys brought in Rudy Carpenter, ostensibly as competition for McGee, but McGee will get his chance to shine in preseason games before Carpenter gets so much as a sniff of the ball. However, if he continues to throw checkdown passes at the rate he did in previous outings, chances are good the Cowboys will leave training camp with only two quarterbacks.

5. Rob Ryan vs. The Number Salad

Odd fronts versus even fronts; 3-4 versus 4-3; one-gap schemes versus two-gap schemes; by the time training camp rolls around Cowboys Nation will be discussing the advantages and disadvantages of each fervently. And many will try to pin down Rob Ryan and his defensive scheme to one specific combination of numbers.

Bill Belichick moved his Patriots from a 3-4 to a 4-3 last year and after being asked for the umpteenth time to explain the move, he answered quite candidly:

“Honestly, I think that’s something that is a media fabrication. There are a lot of different alignments out there. You see 4-3 teams use odd spacing. You see 3-4 teams use even spacing. You have 11 players, you can put them in various positions. Whether you want to put it on the pre-game depth chart as one thing or another, I think is a little bit overrated.”

Rob Ryan would probably answer in a similar way, as he has also shown a penchant for being highly flexible in his schemes. Here's an example from the Bills game last year: 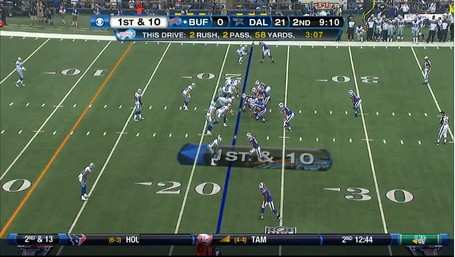 At first glance, the screenshot on the right looks like a pretty standard defensive line-up - until you take a look at who is actually lined up where.

Playing left end with his hands on the ground is linebacker Alex Albright. Next to him is Jay Ratliff and Jason Hatcher is the right end. Crouching next to Hatcher is Victor Butler, who has Keith Brooking standing next to him. Behind the line, Sean Lee is getting ready to attack while Abe Elam is the strong safety who just seems to be loitering around. Frank Walker and Alan Ball are the outside corners, with Walker at the top playing press and Ball at the bottom WR Donald Jones a 10-yard cushion. Sensabaugh is the free safety, Scandrick is playing the slot.

What are the battles you'll be keeping an eye on in OTAs and training camp, and why?