Cowboys Have One Of The Youngest O-Lines In The NFL

Share All sharing options for: Cowboys Have One Of The Youngest O-Lines In The NFL

This year's tentative line-up of Smith - Livings - Costa - Bernadeau - Free will be even younger on opening day 2012, with an average age of 25 years, 6 months, 18 days. Over two years, the average age has dropped by almost six years. That's a big change, accompanied by a significant roster churn, and as we all saw last year, not everything went as smoothly with that transition as the Cowboys had hoped. While talking about the importance of OTAs and minicamps recently, Coach Jason Garrett talked about continuity and transition along the O-line:

"Years ago, the offseason programs weren’t quite as important because the same offensive line played together for ten years. So they’d be on their own [during the offseason], they’d come back for a minicamp and say:

"But today, teams change. There’s obviously a lot of transition in rosters from year to year, so the offseason work is really critical and the development of the players has to happen a little bit quicker."

As it stands today, the Cowboys have one of the youngest O-lines in the league. After the break we try to figure out whether that is a good or bad thing.

Conventional NFL wisdom holds that continuity is one of the keys to success for an O-line. But as Jason Garrett points out, there isn't as much continuity on rosters these days as there may have been in the past. And the lack of continuity is not just about the players, but also about coaches, about schemes and many other things. And quite frankly, continuity didn't help the 2010 unit that much either. At an average age close to 31 it looked like time simply caught up with them.

A couple of days ago, ESPN's John Clayton wrote about a "Theory of 150". According to Clayton, if the combined age of your starting offensive line exceeds 150 years, you should expect a decline in performance. A combined age of 150 years means the average age of your linemen is 30 years, and as a group, that may be too old:

If a team lets its starting offensive line exceed the total age of 150 years for five starters, the clock is ticking on its remaining success. Three teams hit that mark over a three-year period -- the Bears, Washington Redskins and Dallas Cowboys. The New York Giants hit the 150 mark a couple years ago and, even though they won a Super Bowl, they had concerns along the offensive line.

Of course, the 150 number is a little arbitrary (why not 155, or 147.5?), but so what. It serves to illustrates a point, and 30 is generally perceived as an age in the NFL where performance can begin to decline. 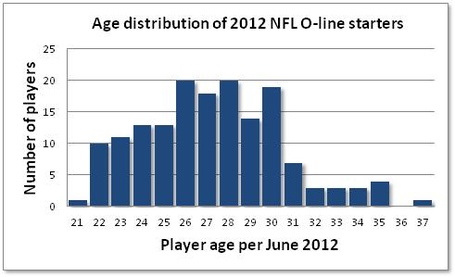 The graph on the right shows the age distribution of the 160 projected O-line starters for the 2012 season. The data is taken from the ourlads.com team depth charts, which I have found to usually be quite accurate and up-to-date.

What you can see on the chart to the right is a pretty strong dropoff after the age of 30 among the starting linemen in the NFL. There are only seven projected starters who are 31 years old, and only 14 more players older than 31.

Sitting all by himself in the 37-year age bracket is former Colts center Jeff Saturday, who just signed on with Green Bay this year.

At the lower end of the scale, we find the Cowboys' own Tyron Smith, who in his second year in the league is still the youngest offensive lineman in the NFL at 21 years of age.

Adding up the current ages of the projected Cowboys linemen, Smith (21) - Livings (30) - Costa (24) - Bernadeau (26) - Free(28), gives the Cowboys a total of 129 on Clayton's Theory of 150. That gives the Cowboys the sixth youngest offensive line in the league. Here's how all NFL teams compare in total combined O-line age, based on the ourlads.com depth charts:

Keep in mind that these are averages, and because there are only five guys counting against the total of each team, having an older veteran on the line can give a false impression if you only look at the average. The Packers for example rank 12th despite having 37-year old Jeff Saturday starting at center. If we were to look only at guards and tackles, Green Bay would have the youngest offensive line in the league.

Overall, the Steelers look to have the youngest offensive line in the league in 2012, and by quite a margin. Five points here equals a whole year per player, so the Steelers aren't just the youngest O-line, they're a full year younger (on average) than the second youngest line. That's a lot, and makes their tentative line worth a closer look:

If you follow the NFL draft, you will instantly recognize almost all the names on this line. The Steelers have invested massively in their O-line, dedicating four of their six first- or second round picks over the last three years to offensive linemen. But while this O-line may look like a draftnik's dream-come-true, it could easily turn into a nightmare for the Steelers' front office in three to four years, when the contracts for all these guys are up.

Sure, it may be a luxury problem, but if all four recently drafted linemen turn into the studs their draft pedigree suggests they could be, they'll want to be paid like studs when their rookie contracts are up. And no team can afford that along their O-line. We saw that in New Orleans this year: The Saints had signed Jahri Evans to a seven-year, $56.7 million contract in 2010, and when OG Carl Nicks was up for a new contract this year, they had to let him go to Tampa for a $47.5-million, five-year deal. If the same thing happens to the Steelers, except not with two but with four players, the question then becomes whether investing mutiple high draft picks in the same unit for players who'll only be on the team for four years was such a wise choice.

Then again, that's probably still a better place to be in than at the bottom of this list, where a couple of O-line's are closing in fast on their expiration date. The Giants, Lions and Cardinals all have only two offensive linemen under the age of 30. Of course, that didn't stop the Giants from winning the Super Bowl last year.

So there's clearly a careful balance that needs to be struck in constructing the O-line, in considering youth versus continuity, in weighing immediate impact versus future cost and in managing stability versus roster transition.

Still, the Cowboys look to be in a good place with their O-line, both in terms of youth and cost. The question is whether they can manage the roster transition better than they did last year. Because while the tackles remain the same, they are switching spots; there will be new players at guard regardless of who wins the starting spot and the center spot may also still be up for grabs.

Coach Garrett seems to think that this year's offseason will be a plus versus last year, and the hopes are high that new OL coach Bill Callahan will also help ease the transition, but there are a lot of moving parts that have to come together just right for this unit work effectively in 2012. Well, at least they have youth on their side.