2012 training camp is about to start for the Dallas Cowboys.

The city of Oxnard has decked out Ventura Boulevard with welcome banners on every lamppost; final touches were put to the fan parking lots today; the tents and trucks for the traditional Midway/Fun Zone are in place; and the Cowboys have had their opening press conference in Oxnard in which Coach Jason Garrett said that the Cowboys are "building a championship team."

That and more after the break.

To me, one of the points of emphasis that we make with out football team, all throughout the offseason and certainly this time of year is we’re trying to build something here.

We believe we’re building a championship team here in Dallas. I think 31 other teams around the league feel the same way. We feel like it’s important to bring the right people in to the organization, coaches and players, and do things the right way on a daily basis.

I think we had an outstanding offseason. Mike Woicik and his staff, the strength and conditioning program is outstanding. I also thought the football-phase of our offseason was outstanding, with our OTAs and our minicamp work – the work we did on the field.

We feel like we have the right people in place. We’ve got to go about it the right way each and every day and that’s what we’re going to try to emphasize to our team.

Some other highlights from today in Oxnard:

Here's another quote form Garrett from today's press conference that will likely go unreported, but is near and dear to my heart.

We have great fans in Dallas. You can go all over the world: It was early July, and there was an election in Mexico. On the front cover of the New York Times, above the fold, was a picture of a woman putting her ballot in the ballot box in Mexico City. She had a Dallas Cowboys sweatshirt on. I thought it was pretty interesting.

We have fans everywhere. We as an organization take our commitment to putting a team together that our fans and anyone involved in our organization can be proud of, we take that responsibility very seriously.

I am one of those fans, traveling over 6,000 miles from Germany to Oxnard in a 23-hour trip to be a part of camp for one week. And I am just one of countless international fans of the Cowboys, most of whom will never get the opportunity to see the Cowboys live, much less set foot on US soil. We are out there.

Yet when I ordered a Cowboys sweatshirt from the NFL shop on June 5, not only did I have to pay a ridiculous $51.90 in shipping and handling for a $29.97 sweatshirt, but eight weeks later the sweatshirt still hasn't arrived. For that S&H charge, my guess is their still handling it somewhere, jst to justify the price.

I went to church in Oxnard this morning, attending the Oxnard Church of the Nazarene. After the service, I talked briefly with the Pastor, and as the talk quickly turned to the Cowboys, Pastor Josh said he'll try to attend camp this week as well. That's a good thing. We'll need all the divine intervention we can get this year.

Question of the day: Below are five weather forecasts for tomorrow. Which one sounds like a good place to have training camp? 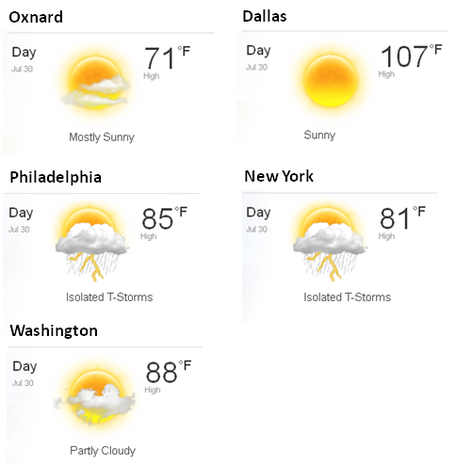