Share All sharing options for: The Worst Of A Good Game: Dallas Cowboys' O Line Vs San Diego Chargers

By now, the offensive line concerns have largely been washed aside on the heels of a good performance against San Diego coupled with the impending return of two missing starters to the game day lineup.

All is not well, however. Good teams can have bad players on them, as can good units. The offensive line's performance in southern California was passable in spite of some poor individual efforts.

After the jump, we take a look at some of the gaffes from the first half of play against San Diego. Warning, content may lead to excessive face-palming.

Again, in my review of the game's broadcast, I became fixated by one player's struggles. Derrick Dockery, despite reports that he's played "well" by some observers, continues to stand out as the weakest link along the line.

You'll find 76 starring in most of these lowlights, but others also experienced moments of weakness. 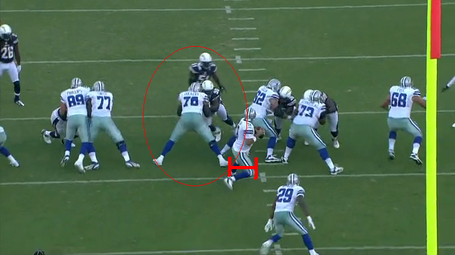 On this play, the Cowboys are throwing a quick pass to Dez Bryant. The play is successful, but may have been disastrous had it continued for a fraction of a second longer. Within the red circle are Derrick Dockery, a Chargers' DT, and also one of their LBs. The defensive play is a delayed blitz through the A Gap by that linebacker.

The red bracket shows Dockery's position relative to the hash mark at the start of the play. 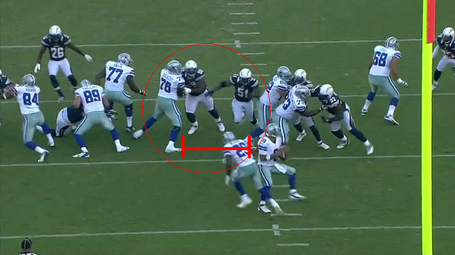 Less than 1 second later. The red circle contains the same three players, but look at the red bracket. Dockery has been bulldozed nearly a full yard sideways, opening up a wide running lane for the Chargers' middle linebacker to tee off on Romo. Were it not for the fact that these two teams will be spending the next two days together, I think this ends badly for Romo.

The rest of the line is executing successful blocks. 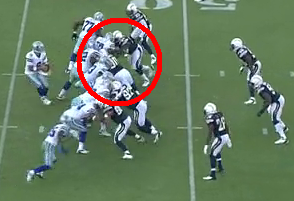 It's funny how mundane plays are often overlooked in "analysis." This particular pass results in an incompletion along the far sideline. Not successful, by any means, but due to the aversion of disaster it will likely be passed over by most.

In this play, Dockery is one-on-one with a Charger defensive end. Nothing is spectacularly wrong with his engagement, and yet things quickly deteriorate. He simply can not compete with NFL-level defensive linemen, which is sad when we're discussing a seasoned veteran. 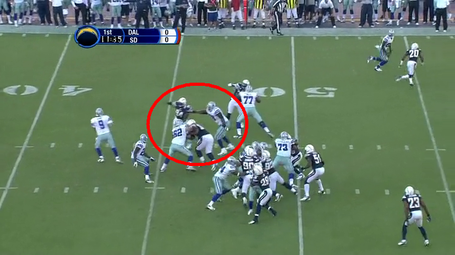 I'd say he got beat pretty badly on that play. Here he is, holding (wasn't called, but it's blatantly obvious) to save Romo's life.

Like I said, he engaged the defender without issue. He didn't simply miss the guy, which can happen to even decent linemen. He got his hands into the guy's chest and still was tossed aside like he was in his redshirt year at a Division II program. 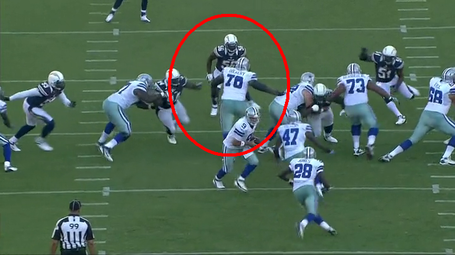 This is one of the much-maligned Felix Jones failed runs. On this play, the ball was snapped without Romo calling any changes to the protection, so there should have been no cause for confusion. 56 was not called out as the Mike blitzer.

Nevertheless, Tyron Smith is left out in the cold on his double team block as Dockery pursues this linebacker. At least he'll deliver a punishing block, though, right? 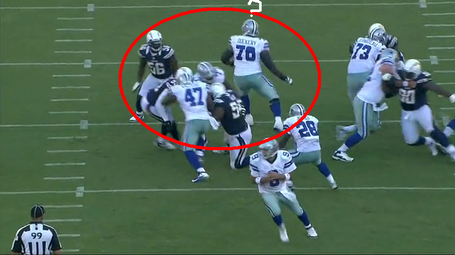 I believe the picture is self-explanatory. The play is killed off by Dockery's failure to pickup the double team with Smith, who blocked the man into Dockery with that intention. Dockery, meanwhile, is wondering where that linebacker went, who easily ran around and behind Dockery to clean up the play when it appeared Felix had stayed on his feet.

Arkin is losing his battle here, but he maintained his block long enough for the play to succeed.

After this screenshot, Dockery turns around, hands on his hips, and watches the end of the play as 56 takes a shot at Jones after the whistle.

Now, in example 4, we'll take a break from bashing Dockery, as he's helping Tyron Smith on the double team (essentially the same play as the last one, but for the handoff). Here it is. 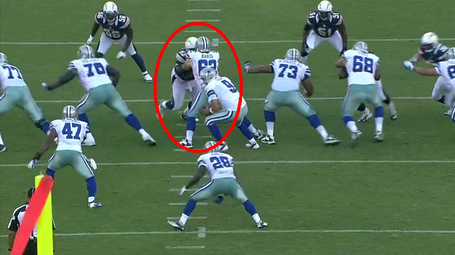 On this Jones run, Arkin gets called for holding. The play attacks the left side, similar to the previous example, but in this case the play comes from a weak set (Weak I, where the fullback lines up on the side opposite the tight end), while the previous play came from a true I formation, and the ball was handed off on the right but run to the left - a counter of sorts (belly?). 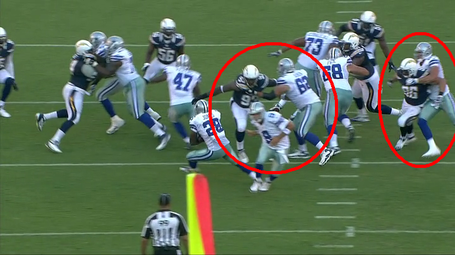 Also, shortly after the screen, Vickers misses his block and is visibly angry with himself. He dives at 56 and hits him in the thigh, but 56 keeps his feet and would have stopped the play if it had continued.

Felix still isn't getting any holes to run through.

This next one, also, has nothing to do with Dockery.

There is no shot of the beginning of this play, as the cameras were focused on Beasley after he picked up the first down. This is the play on which Felix Jones dropped a pass in the flats which would have netted a couple of yards. 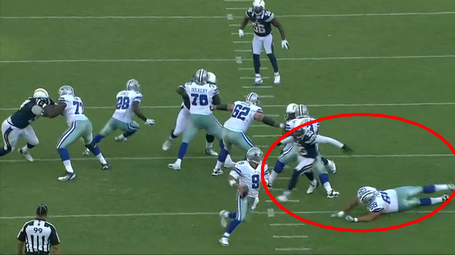 He actually is stumbling backwards before twisting and diving into the position shown here. Phillips, the Charger within the red circle, simply planted Free with his bull rush, knocking him backwards, and believes he has a clear shot on Romo. Of course, Romo escapes the pressure and the play becomes about Felix's dropped pass (imagine if he had caught it and lacerated his spleen).

Not much else to say on this one. Ouch.

Okay, back to Dockery again.

This play starts off rather ordinarily. It's the off-tackle run by Jones that went for positive yardage, over Doug Free. Dockery starts off looking to help engage the DE with Smith. 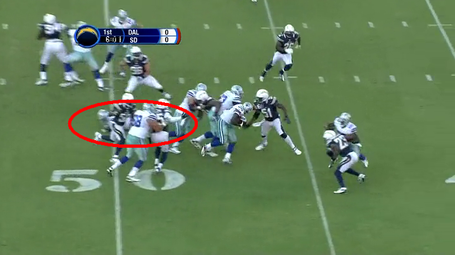 It's difficult to see what happened, but Dockery turns to face the play, and then proceeds to epically dive onto his face, seemingly in an attempt to tackle the pursuing linebacker sharing the red circle with him. Interesting play, but hard to evaluate. 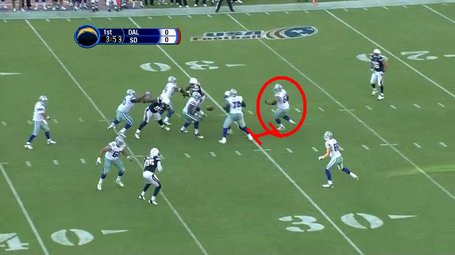 Not so much a blocking error here. Some had questioned the call, so I thought I'd illustrate it. It was, by definition, a correct call, as Arkin was downfield more than 1 yd and that possibly gave him an advantage while blocking after the catch.

Nothing too much to worry about, here. Simple mental error. Oh, and if the "good refs" wouldn't have called that, does that really make them "good?"

One last bit of fun: 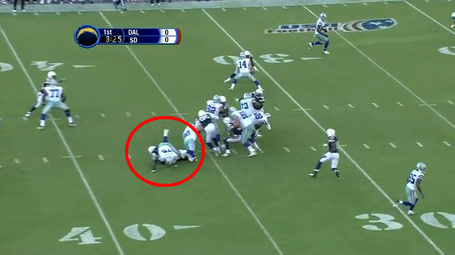 This is Felix's run, during which he is brought down by a "phantom tackle." In the red circle we find Dockery, who pulled to lead on the play. Rather than attack the hole, however, he decided to dive on top of a fallen Charger. Poor guy.

The tackle is actually made by the Charger being blocked by Free, who, as you can see, has completely lost his battle and is now pushing the defender from behind (illegal, no?). Jones' leg is grabbed and he spins to the ground.

You can also see Beasley attempting a block, which ends up being a mid-run shoving match. At least he tried. Gave up a big reach advantage.

That's it for my early observations of our starting line. Hope you enjoyed the stills. What do you think of the plays? Any others you want looked at? Have at it in the comment section.