We've all heard the stories about Cole Beasley in training camp. The little receiver with a big impact in practice, a seemingly impossible cover. In the first game, he had been rather quiet...but no longer with the Chargers game.

Beasley "broke out," in a sense, but many of his plays were made against lower-level competition that, quite frankly, isn't a suitable audition for someone we might see lining up as the third receiver against the Giants on September 5th.

We need to know some things about Beasley. How does he get off the line? How does he react when getting pressed? How does he perform when the guys playing across from him don't have his well-being in mind?

After the jump, we see if Beasley really has what it takes to compete in the NFL, against real NFL-level competition. 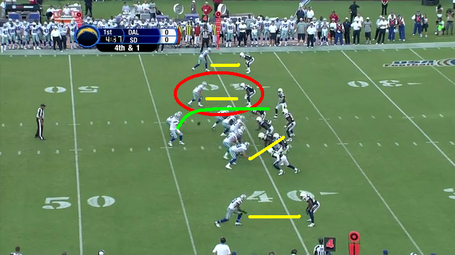 Let's not waste any time. This is the 4th and 1 play from late in the 1st quarter on which Romo hits Dez on the slant for the 1st down. This is still a significant play for Beasley; it came against a first-team defense. Shareece Wright, the Chargers' slot corner, was lined up in man coverage with no one behind him (Eric Weddle was coming on a Safety Blitz). Time to see what Beasley can do.

The yellow lines indicate man coverage. The green line is the safety blitz. The red circle contains Beasley and Wright. Atari Bigby, the other safety, is playing the near side of the field, either doubling Bryant or cheating away from mid-field responsibilities. 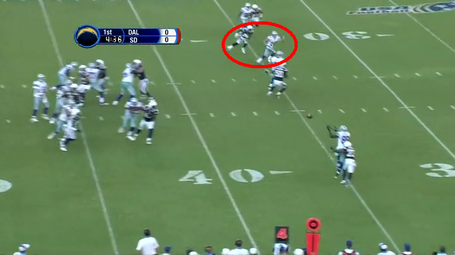 As the ball is thrown to Dez Bryant, you can see Beasley has clearly achieved separation from Wright, and is behind the secondary. Bigby is closing on Bryant, and is unlikely to be able to catch up to Beasley as he straightens his route upfield while calling for the ball. 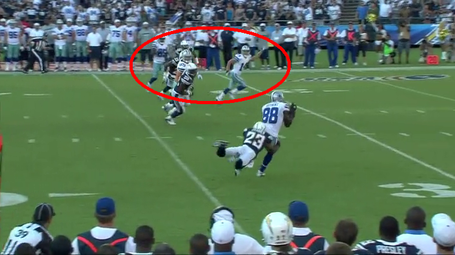 One last still clearly shows the degree of separation Beasley has attained as Bryant pulls in the pass.

At first look, it appears Beasley can compete. 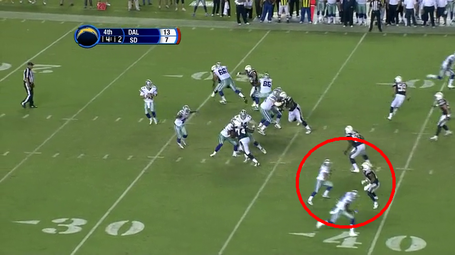 On this play, Beasley sets up his opponent with a quick jab step to the outside, which causes the corner to bite and move outside (this is a zone defense, and the corner in front of him has curl/flats responsibilities). 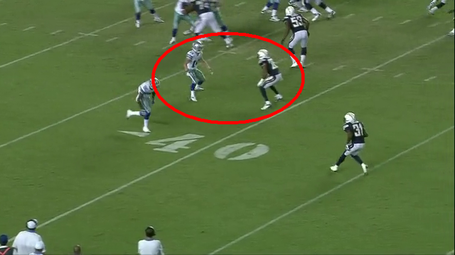 This frame is a split-second before the first, and shows Beasley putting his weight on his outside foot to draw the corner out of position to disrupt his route (the corner is shallow enough that he is still expected to jam the receiver, something Beasley might not be able to recover from). 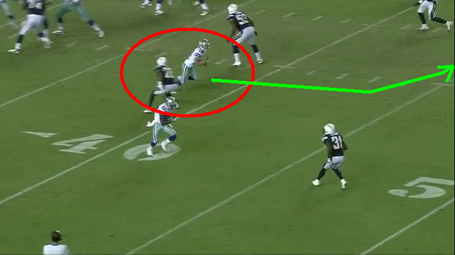 By the time the corner realizes his mistake, Beasley has already changed direction and exploded upfield. The green arrow indicates the path that he'll take on his way to a 28-yard gain, much of which comes after the catch.

This play is a prime example of Beasley manipulating zone defenders in order to open holes to settle into. The player he fooled on this play was number 28, Brandon Taylor, the Chargers' 3rd-round pick out of LSU in this season's draft. I like that UDFA Beasley makes mid-round SEC DBs go wherever he wants them to - another positive sign of his ability. 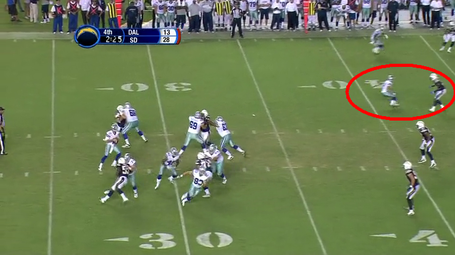 Now we're in the two-minute drill, where teams look to protect the deep pass and guard the sidelines. Beasley starts off his route by driving hard at the defender, forcing him deep into his backpedal. 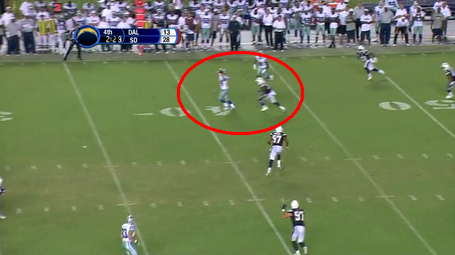 An effortless change of direction later, Beasley has the essentially uncontested catch, but is unable to reach the sideline as the DB recovers for the quick stop.

Good play, but unfortunately it wasn't completed by getting out of bounds. 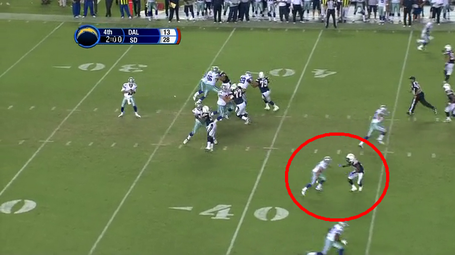 Beasley sets up his inside cut down the seam by taking a jab step outward, much as he did against the zone in an earlier play. This time, it's against one of the Charger's bottom-of-the-roster corners, DeAndre Presley. 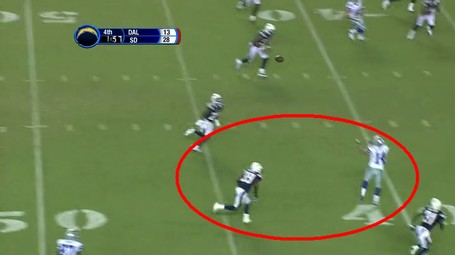 Presley bites hard to the outside, and Beasley gets wide open despite being in a sea of defenders. He jumps up to get the ball at his highest point (its highest point is a place where even Dez can't make the catch), and gains a few yards before being taken down.

Chalk up 29 more yards for Beasley. 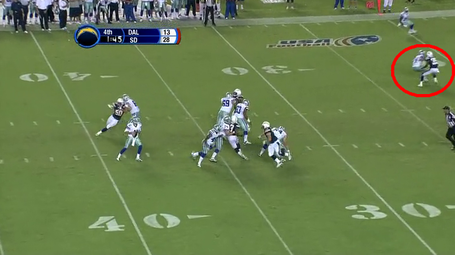 Here, Beasley is running a comeback route, again in the 2-minute drill. As you can see, the defender is draped over Beasley as he drops his hips and gets his feet underneath him at the 23 yard line. 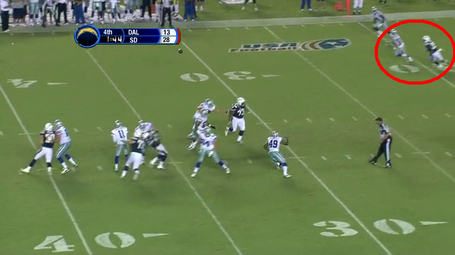 Can't ask for better execution, here. The victim is, once again DeAndre Presley. 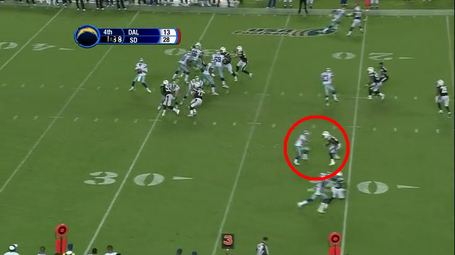 Once again, we see Beasley breaking down into his cut. This time, however, the defender appears not to buy the fake outside, as he maintains his center of gravity and prepares to break to the inside when Beasley does. 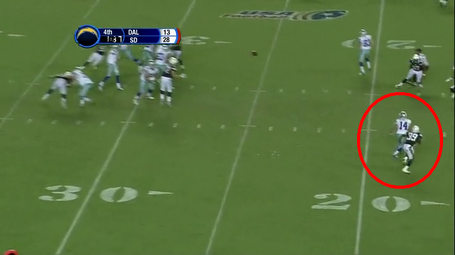 Beasley never the less is able to cut quicker than the DB, even when he knows what's coming. He gains inside position on the corner, and is able to make the catch and slide between defenders for ten additional yards, down to the 8.

Beasley had a great game against the Chargers, with very few mistakes. He, surprisingly, didn't play that much. When he was on the field, however, the quarterbacks generally trusted him to make the play. His sure hands and route running ability will make him very difficult to cut, come next week.

With Ogletree's coincidentally excellent performance, it will be interesting to see how much playing time the 3rd receiver candidates get against the Rams, in what should be our "dress rehearsal." Even more interesting will be who sees the field Wednesday, September 5th, in New Jersey.