One of the many reasons for confidence going into this preseason schedule, and looking forward to the season, is the expected strength of our defensive front. This includes our outside linebackers, as they often fill lineman-like responsibilities, but not blitzing ILBs (Victor Butler needs some love - but Sean Lee just doesn't fit in here).

With an expected starting lineup of Jason Hatcher, Jay Ratliff, and Sean Lissemore, opposing offensive lines should be forced into a sort of "pick your poison" situation when deciding who to double team. Add in Spencer and Ware on the edges, and this is a formidable lineup.

We didn't have this lineup going against San Diego, however. Instead, we saw a front 5 consisting of Victor Butler, Kenyon Coleman, Josh Brent, Sean Lissemore, and Alex Albright (only one of the presumed opening day starters). With 80% of the starters missing, should we expect them to still make plays?

Take the jump, and find out. 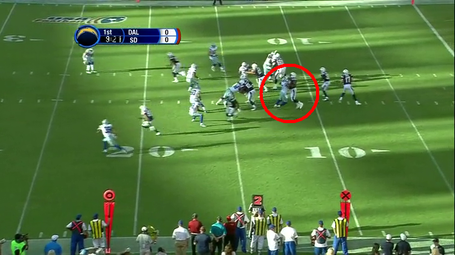 This play may be stuck in your memory. On the Chargers' first pass attempt, Victor Butler gets pressure on Rivers and brings him down for the sack. 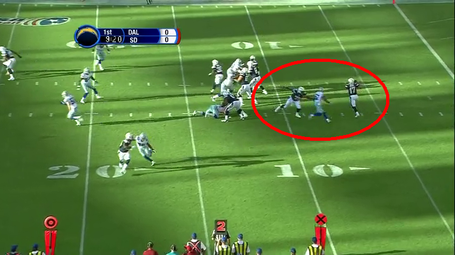 The poor tackle didn't have a chance, as he's seen here looking to hold Butler and prevent the sack, to no avail. But what happened here? Take a closer look. 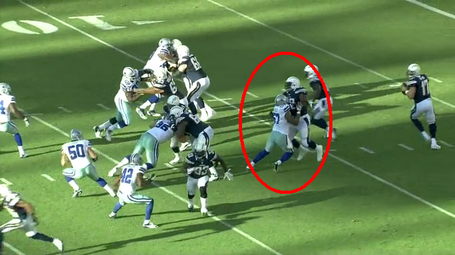 The replay angle shows Victor Butler demonstrating a power I never thought he had. He explodes into the pads of the rookie tackle (newly extended starter Jared Gaither is experiencing back spasms - not expected to come back soon, as he's been battling laziness his entire career).

This 310-pound tackle is lifted into the air by Butler's explosiveness - a clear victory in the pad-level war. 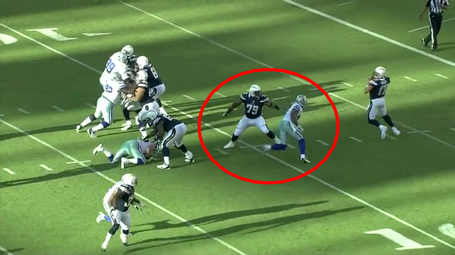 By the time his victim regains his feet, Butler has already turned the corner and closed in for the sack.

If you're a Victor Butler fan, you have to love this play. He explodes into the tackle and knocks him into the air and backwards, allowing a clear path to the quarterback. I haven't seen a prettier play this preseason from a pass rusher. 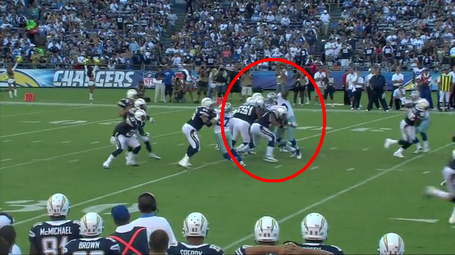 This next play didn't show up on the stat sheet. Kenyon Coleman looks to have let a guard get under his pads, which is a good way to be pancaked. If you look closer, though, you see that he's executing a swim move, punching the guard's left shoulder with his right hand, while swimming over with his left arm. 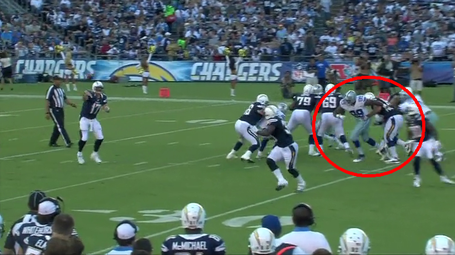 The move is instantly effective, as the guard wraps his arms around Coleman's waist, holding him. The ball was out, and the flag wasn't thrown, but if Coleman can continue to beat opponents like this, the flags will come.

Coleman isn't playing like a complacent veteran, or even someone who believes he'll inevitably be cut. He's showcasing what he brings to this team and, though he may not get any better, he's still capable of playing at a high level. 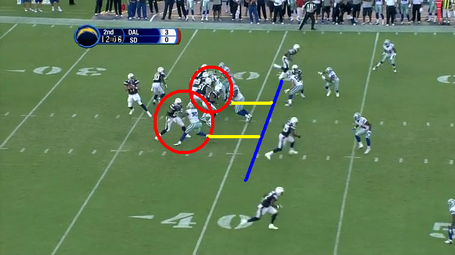 Now we move on to the (first) Brandon Carr interception. Tyrone Crawford and (number obscured, but I think it's) Adrian Hamilton drive into the tackles at a depth of 2 and 3 yards, respectively. 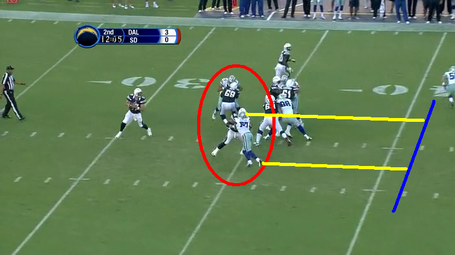 A second later, Crawford appears to be gaining outside leverage, while Hamilton is still driving his man back. Depth is now 7 and 5 yards (Crawford is picking up speed). 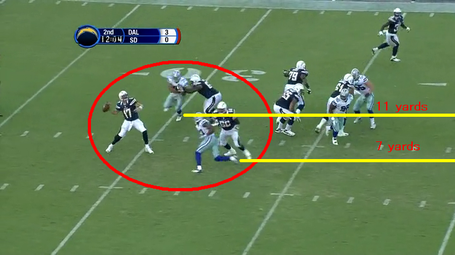 Finally, at 3 seconds, both Crawford and Hamilton shed their blocks to close on Rivers, who has dropped 11 yards downfield. The pressure prevents Rivers from stepping up, and gives Carr an easier opportunity for the pick.

The matchups and distances suggest that both Hamilton and Crawford are capable of driving back NFL tackles. Crawford is clearly the more powerful player, but it's comforting to see our UDFA pass rusher able to drive back a lineman at any pace. 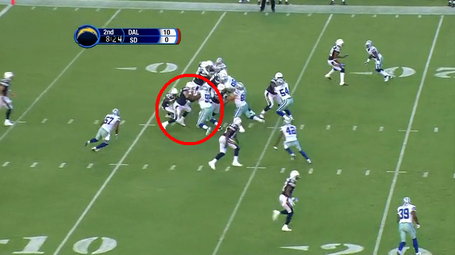 Now, we move on to a second quarter run play. Kenyon Coleman once again gains our focus as he drives his man backward (the right tackle). 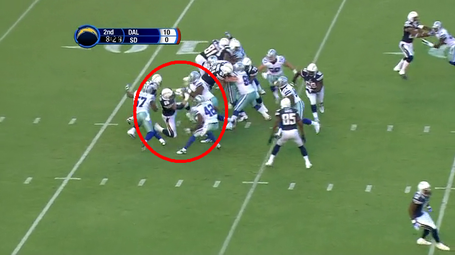 Victor Butler forces the running back to cut inside, and Coleman responds by throwing his man to the ground, completely decleating the would-be blocker in order to make the tackle.

With this much sheer power, it's hard to make a case for cutting Coleman. We just haven't seen this type of domination from the younger candidates. 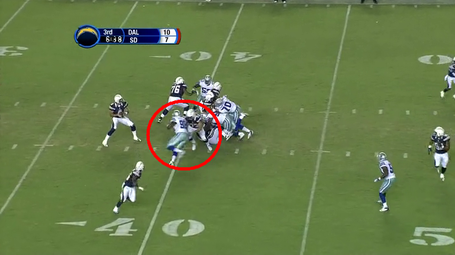 Finally, we take a look at Clifton Geathers. The large DE is attacking the tackle after coming on a twist stunt, giving him a leverage advantage at the point of attack. 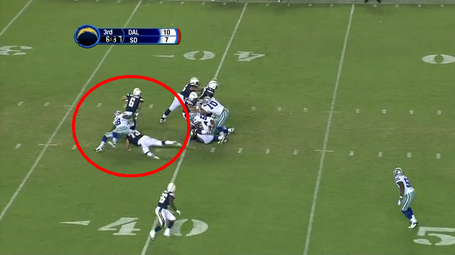 I'm not sure about the legality of this, but the beaten tackle dives into Geathers' knees, toppling him and preventing what would have been a sure sack.

It's a definite positive to see him winning battles and properly executing line stunts, but again he's derailed by his large stature and high pad level, which allowed him to be cut down by a questionable block. If he had the bend of a true pass rusher, he would have been less exposed and quicker around the corner - but, then, that wouldn't be very fair to the opponent, now would it?

While this was a quest for highlight-able plays, it's worth noting that I didn't find much that could be considered negative. Our line and pass rushers all performed well, if not spectacularly. Many of them faced frequent double teams and maintained their ground. The unfortunate truth is that the majority of defensive line play is difficult to highlight - the before and after would show little change and only a true expert would be able to indicate success or failure. An expert, I am not, so I leave you with these five plays. Hope you enjoyed it.

What do you think about our D Line? How do you think they performed against San Diego? Let us know in the comments section.