Cowboys vs. Rams: Two Key Plays By Tony Romo And His Receivers

Share All sharing options for: Cowboys vs. Rams: Two Key Plays By Tony Romo And His Receivers

Oh the wonders of modern technology. I have been waiting for a very long time to finally venture into the Xs and Os of the wonderful game of football, but I have remained reluctant to take part in the analyzing and breaking down of the game.

For starters, it's very hard to distinguish what is actually going on out on the field with regular television footage. But if you keep it simple and break down the simple fundamentals of the play, I believe that even an amateur football fan, like myself, can come away with a pretty decent analysis.

The NFL dropped a bombshell when they announced that they would finally be releasing the Holy Grail of football information, the All-22 film, to fans who purchase the NFL Rewind package from NFL.com. Honestly, the All-22 film is worth hundreds, maybe thousands of dollars alone, so the NFL did a great thing for football fans by offering the replay of football games and access to coaches film for the price they did.

Even though I don't have access to the regular season coaches film yet, I wanted to venture into analyzing what the Dallas Cowboys did against the St. Louis Rams. Over the course of this week, I will offer my take on some of the plays that impacted the game in a positive or negative way.

This post only focuses on two plays, but these two plays were important to the success of the opening drive of the game. 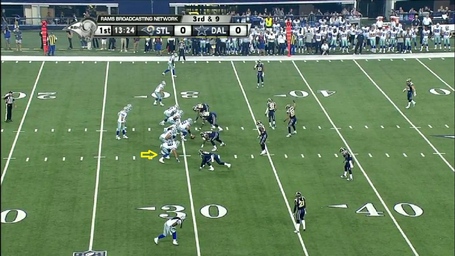 The Cowboys had their first big test of the night on 3rd and 9 from the Dallas 31. After DeMarco Murray got stuffed on the previous play, Tony Romo and the Cowboys decide to run the no huddle.

The Cowboys decide to operate out of the shotgun formation, with Ogletree and Harris lined up wide, and Beasley in the slot. You will see an arrow on tight end John Phillips, who is starting in place of the injured Jason Witten. Phillips really looked good tonight, but he was clutch on this 3rd down conversion that the Cowboys needed early in the game. 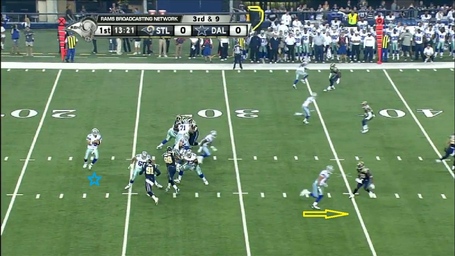 After the snap, Phillips carries Rams linebacker Rocky McIntosh up the field. The yellow arrow shows you that Phillips is taking his route up the field, but Phillips is waiting to break on his route until he clears the first down marker, which is exactly what a receiver should be doing on third down.

The blue star shows where Tony Romo is at the end of his drop, which looks like a short three step drop to me. He is analyzing the field, looking for an option to throw the ball to. 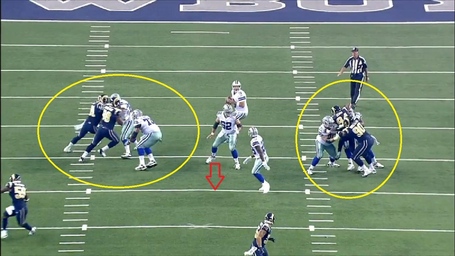 In the replay of this play, you get a better look at the protection Tony Romo gets from his offensive line. David Arkin is manning the middle of the field, while DeMarco Murray sneaks out of the backfield to become the check down option. 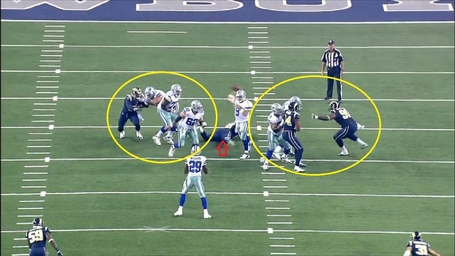 The red arrow points to Kendall Langford, who eventually gets by Bernadeau, but Tony Romo is just a terrific scrambler and easily sidesteps Langford. Romo then steps up into the pocket to make the throw to a wide open Phillips. The line did a very good job on this play, but once again Tony Romo shows that he has the ability to make plays with his legs. 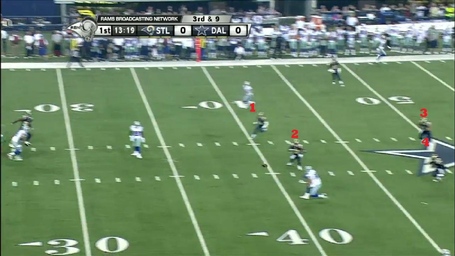 In the final frame of the play, we see the throw finally reaching a wide open Phillips. Phillips did a great job running his route up the field, then breaking it off near the first down marker and coming back to the quarterback. Notice that there are four St. Louis Rams converging on Phillips before he even makes the catch.

It also took nearly all four of those Rams to keep Phillips down on the turf. If Phillips continues to make clutch plays like this on third down, he will fill in nicely for Jason Witten if we need him to. 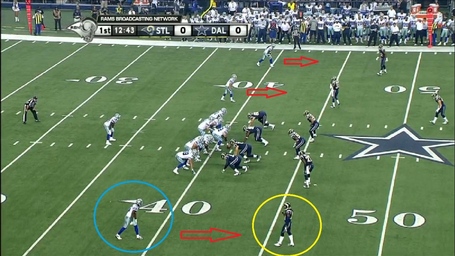 On the very next play, 1st and 10 on the Dallas 41, Tony Romo does his patented "KILL, KILL" call at the line of scrimmage. Romo probably called an audible out of the running play because Rams safety Quintin Mikell came down in the box to help out against the run or blitz on a pass. Knowing this, Romo must make a quick decision and trust his offensive line, and he does both.

Tony also sees opportunities for all of his wide receivers, especially Kevin Ogletree who is lined up against the talented, but young and inexperienced Janoris Jenkins in man to man coverage.

One aspect of Romo's game that I believe is underrated is his pre-snap recognition. When he first took over as the starter in Dallas, Romo didn't understand the game like he does now. A lot of his success comes from understanding the defense and knowing what he has in front of him.

This play is a prime example of what Tony can do before the snap. 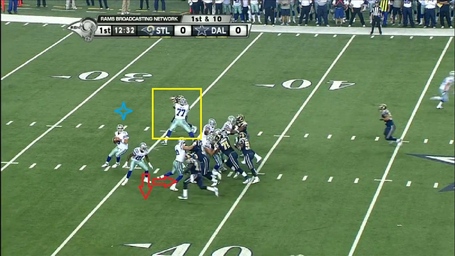 Notice the protection here by the offensive line. I put a box around Tyron Smith here because he does a great job on the defensive end attempting to come around the edge on him. Tyron had a great battle with Robert Quinn tonight, but he didn't face Quinn on this play. Regardless of who Tyron faced on this play, he does what a good left tackle is supposed to do, neutralize the blind side pass rusher.

The red arrow points to DeMarco Murray, who has to make a choice here. He needs to decide where he should attack the safety blitz. Murray is excellent in pass protection, and he times it perfectly when he takes a great angle to neutralize the safety blitz.

The blue star points to Tony Romo, who knows where he is going with this football the entire time. He quickly runs through his options, but he sees that Ogletree has a one on one match up with a rookie cornerback. 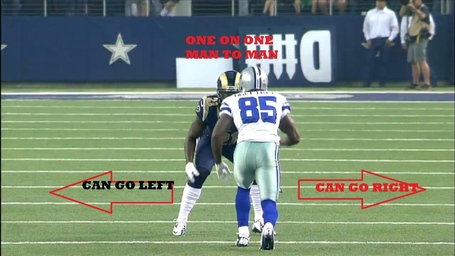 Before Romo throws the ball, Ogletree has a one on one matchup with Janoris Jenkins. Ogletree runs a double move here, which allows him the option to break left, or break right. 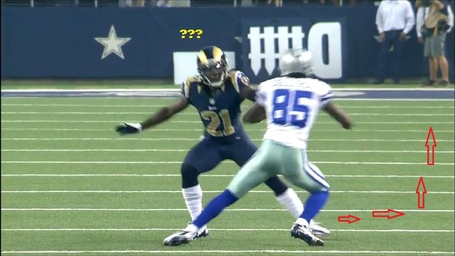 Ogletree makes the correct move here and breaks to his right. The double move that Ogletree put on was perfect because it allowed the cornerback to trip and stumble. The flat footed Jenkins is put into a bad position here because the safety blitz leaves a lot of open field behind him. 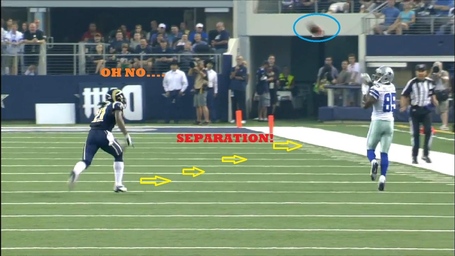 Finally Romo makes a beautiful throw right into the breadbasket of Kevin Ogletree, who has gained major separation from Janoris Jenkins. Because the Rams blitzed their safety Quintin Mikell on this play, they need the other safety to fly over from his position and make the tackle on Ogletree.

Craig Dahl does make a great effort to finally catch up to Ogletree, but not until after a gain of 25 yards.

To put it simply, these are the types of plays that Kevin Ogletree must make. He has flashed all pre-season, but then he misses a great opportunity on 3rd down when he can't secure the reception on a slant pattern.

Ogletree has made this team, he has earned it. He needs to continue to show his development as a wide receiver, but I love what I am seeing from him so far. Dwayne Harris continues to grow as a wide receiver, and right now it's looking like a good situation at the receiver position.

These two plays may not make Sportscenter, but these are the types of plays that good football teams make. I hope you enjoyed a closer look at two key plays from the opening drive, and I cannot wait to do this all season long for BTB.