While Ogletree had a solid performance with five catches for 75 yards, Harris was the receiver who found the end zone, twice.

Entering the game, it was hard to believe that Tony Romo would have a huge night without Miles Austin, Dez Bryant and Jason Witten. Romo shredded the Rams defense for 198 yards and two touchdowns - in one quarter. Harris was on the receiving end of both scoring plays and I decided to take a closer look at what he did the other night.

Take the jump for more... 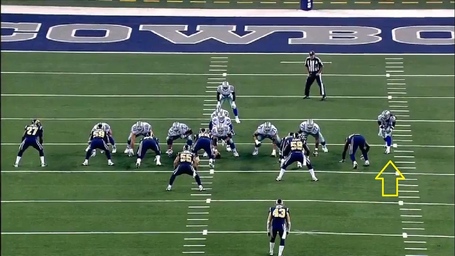 Let's examine the play that took place before the 61 yard touchdown. The Cowboys run a bit of trickery on their first play of their second possession. The yellow arrow shows where Harris is lined up, who is going to be a key blocker in this play. 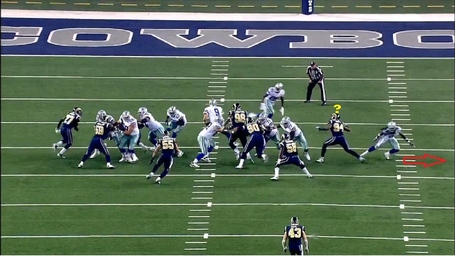 The Rams bring safety Quintin Mikell on a safety blitz, which was a theme of the evening for the St. Louis defense. Tony Romo sells this play brilliantly by faking a handoff to fullback Lawrence Vickers, then pitches it out to DeMarco Murray.

The design of the misdirection before the pitch tricks the defensive line into moving one way, while the play actually goes the opposite way. This also pulls up the linebackers and confuses them. A play like this can gain positive yards, but it does wonders for your passing game later in the game.

Defensive end Robert Quinn is totally taken by the fake. Due to his mistake, it leaves a lot of open room for Murray. 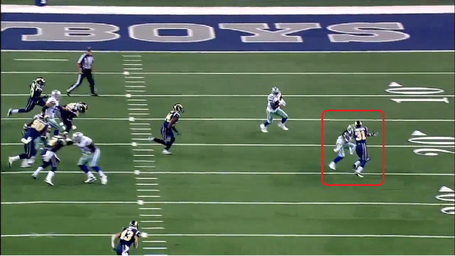 The red box outlines Dwayne Harris as he engages cornerback Cortland Finnegan. Finnegan is one of the most physical cornerbacks in football, so for Harris to completely neutralize him on his block is very encouraging. 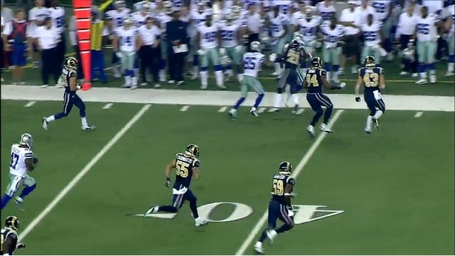 Kevin Ogletree can't take cornerback Janoris Jenkins completely out of the play, if he did, this play may have gone for more than 16 yards. 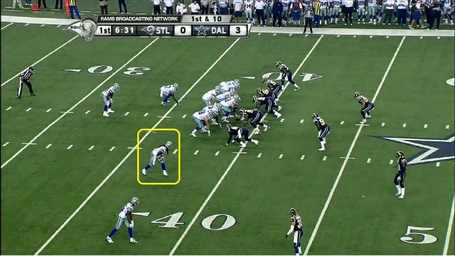 On the very next play, the Cowboys come out with an offset formation. Ogletree and Harris line up to the right of Tony Romo, while John Phillips lines up next to Tyron Smith. 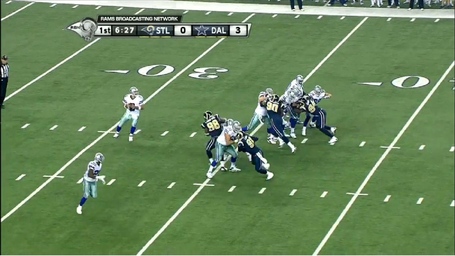 The offensive line once again does a great job of holding up in pass protection. Tony Romo is analyzing the field at the end of his five step drop and recognizes the breakdown in the zone coverage the Rams are running.

I ran a stopwatch to see how long the offensive line gave Romo on this play. Romo throws the football around the 4.0 second mark, which is really impressive considering that Football Outsiders measures the median sack average at 2.7 and 2.8 seconds. 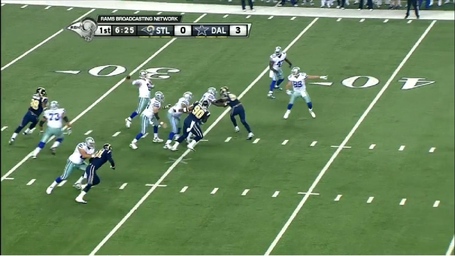 Kendall Langford eventually gets by Mackenzy Bernadeau, but overall the pocket is clean enough for Romo to avoid any real threat.

Tony steps up into the pocket and unleashes a deep bomb to a streaking Dwayne Harris who is running a deep post route. 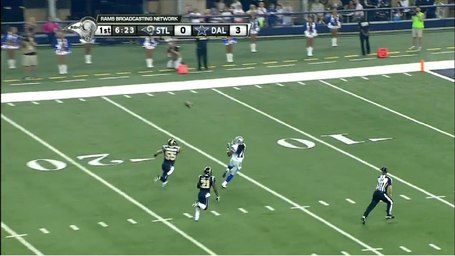 Harris runs his route to perfection as he gets beyond James Laurinaitis and Janoris Jenkins for the 61 yard touchdown. 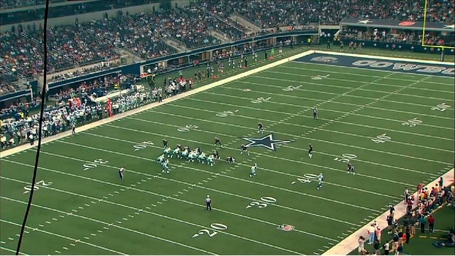 The Rams broadcast of this game showed us the All-22 shot from the eye in the sky. We will finally have access to this footage once the regular season rolls around, but I was lucky to get a preview of it on the replay of the touchdown. 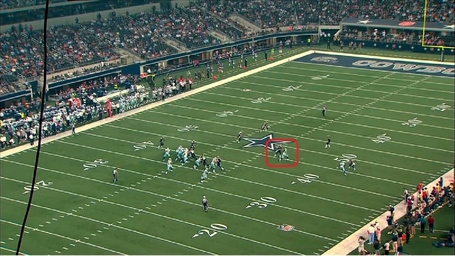 Harris begins to carry his defender up the field. Because the Rams are playing a zone scheme similar to the Tampa Two here, they need Janoris Jenkins to stay up top and defend the deep half of the field. 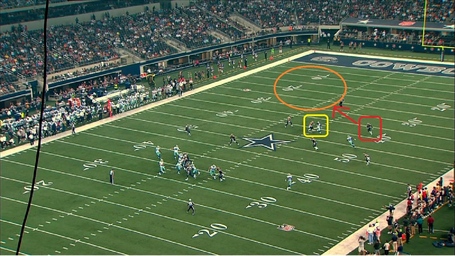 Harris runs a good deep post route here while managing to wiggle around the zone defense. He has a natural feel for running routes like this and notices the blown coverage.

Laurent Robinson made a lot of big plays last year that were very similar to this one. The deep post can be a disaster if the offensive line doesn't allow the route to develop, so kudos to the line for holding up in protection.

Once Harris clears the first area of the zone, Janoris Jenkins gets caught peaking into the backfield for too long, a common rookie mistake. Because of his breakdown in coverage, this leaves a large part of the field uncovered.

Laurinaitis does his best Brian Urlacher impression to stay with Harris deep, but it's too late. Jenkins fails to rotate over to the deep half of the field and leaves a perfect hole for Romo to throw into. 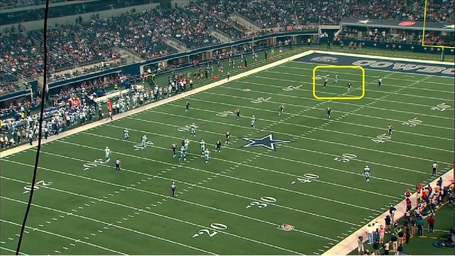 A lot of quarterbacks in the NFL can make this throw, but this is one of the best throws I have seen in a very long time. Yes, Romo is a professional quarterback in the NFL, but this just goes to show you exactly how accurate he can be.

He drops a perfect 50 yard pass right into the hands of Dwayne Harris. Romo anticipated where Harris was going to be, which is very hard to do. This was a well designed play, but the execution was flawless from the offensive line, quarterback and wide receiver. 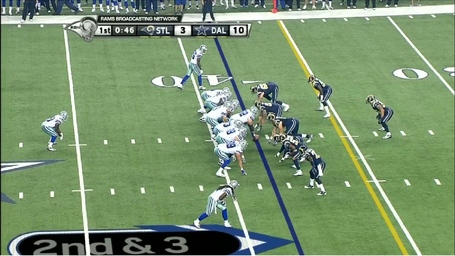 On Harris' second touchdown of the night, he runs a crossing pattern similar to the touchdown he had last pre-season against the Denver Broncos.

The Cowboys operate out of the two tight end set with James Hanna next to Tyron Smith and John Phillips next to Doug Free. 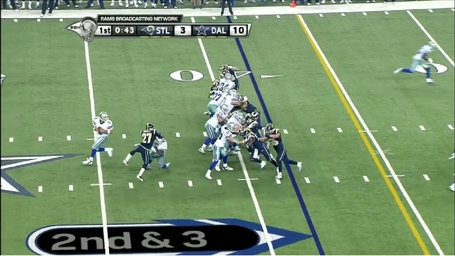 From the beginning of this play, the Rams weren't properly prepared. They have brought eight men into the box, once again bringing Quintin Mikell up to the line of scrimmage.

This was the playaction pass that Jason Garrett was waiting to dial up on the Rams. This was great timing for the playaction, but it almost ended in a disaster.

Quinton Mikell blitzes off the edge, but Felix Jones is there to meet him. Felix never really sets properly on his block and Mikell bounces off of him, but Felix did delay the blitz long enough for Romo to make a quick throw. 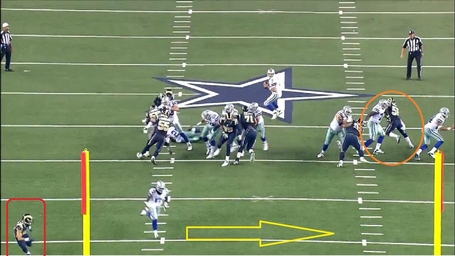 The red box around Corltand Finnegan illustrates the partial blown coverage on the Rams' part. Dwayne Harris runs his crossing route to perfection, and cuts across the field.

Tyron Smith is beaten badly on this play. His poor footwork and balance allow defensive end Robert Quinn to drive him backward. 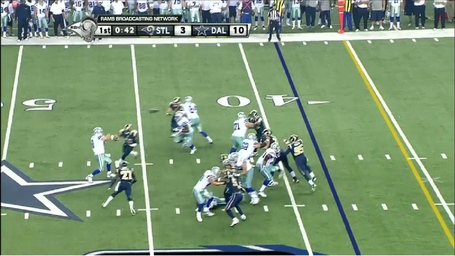 If not for the blown coverage and lightning quick release of Tony Romo, this could have ended badly for the Cowboys. Fortunately, Harris is wide open streaking across the middle of the field and Romo immediately locks onto him. 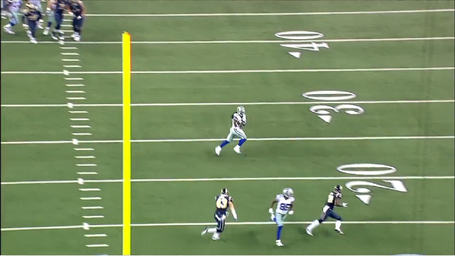 Harris catches the ball in stride with Kevin Ogletree ahead of him. Craig Dahl and Janoris Jenkins need to close in and make the tackle, but they fail miserably. 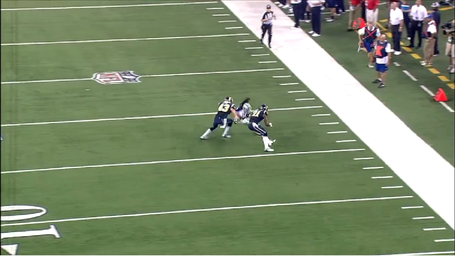 Harris engages the two defenders and lowers his shoulder to break the tackle. This is actually a drill the Cowboys practice during training camp, and it paid off as Harris breaks both tackles.

While the technique was sloppy on the Rams part, Harris still gives maximum effort and never gives up on the play. This is exactly what you want to see from a young wide receiver fighting to make the team. 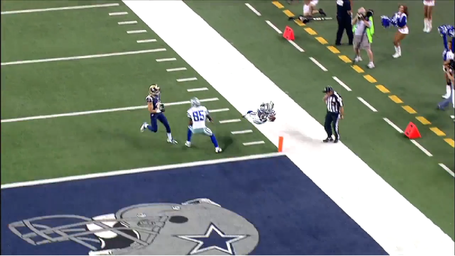 Harris leapfrogs into the end zone, which is starting to become his signature touchdown celebration. This type of performance should solidify Harris as a part of the 53-man roster, but he won't see breakdowns in coverage like this every week.

And of course, you can see the play in all its glory here as well:

The Dallas Cowboys 2012 Season Preview is available for 99 cents as an eBook. Buy it today! Also available on iTunes

SB Nation/Blogging The Boys present the Dallas Cowboys 2012 Season Preview as an eBook. It’s available now for purchase through iTunes or on Amazon for the Kindle. (There’s even an app from Kindle for reading it on a regular computer if you don’t have a tablet). Created by the front-page writers here at BTB, this eBook will get you primed for the Cowboys 2012 season. The best news, it’s only 99 cents! Over 250 pages of Cowboys knowledge, plus photos. Go here for iTunes, or here for Amazon. Help the cause here at BTB by dropping a buck for a knowledgeable and entertaining Cowboys Season Preview!