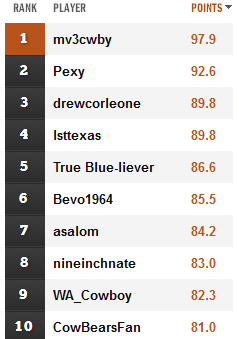 Last week, we introduced you to Pick 6 Football, courtesy of SB Nation. The rules of the game are very straightforward:

You have a fantasy budget of $120 with which to pick six players (QB, RB, WR, TE, K, Wildcard). Player pricing is determined by how often a player was selected for a lineup in the previous week. So you need to spend your money wisely - popular players rise in value, less popular players will be more cost effective. Best of all, this game doesn't require a season-long commitment, you can basically jump in at any time.

The inaugural BTB contest was won by mv3cwby, who collected 97.9 points. The BTB Top Ten leaderboard is displayed in all its glory on the right side of this post. We had 141 participants in week 1, let's see if we can get a higher participation for week 2.

Remember that there's a Thursday game between the Bears and Packers so in order to lock in your picks for Week 2, you'll need to have them entered before 8 p.m. ET on Thursday. And if you didn't participate in Week 1, you still have plenty of time to catch up as it wasn't a huge fantasy points weekend anyway - or you could dominate the weekly leaderboards.

After the break, see which players mv3cwby picked for last week's win, and which players some of our writers are going with this week.

As befits the winner on a Cowboys blog, mv3cwby's winning roster included a Cowboys player:

Here are the week 2 picks of three of our writers.

Think you can beat them? Click on the banner below and you'll be taken directly to the Pick 6 welcome page, where you can select the players to fit your $120 budget.

Use the comments section below to talk about last week's results, your strategy for winning this week or why the three writers above are all doofuses.