My Crystal Ball Ain't So Crystal Clear: Projecting The 2012 Cowboys

Share All sharing options for: My Crystal Ball Ain't So Crystal Clear: Projecting The 2012 Cowboys

Is two weeks too early to try to figure out what type of a team the Cowboys are?

After the first two games last year, the Cowboys had the fourth best defense (283 yards allowed per game) and the fourth best offense (431 yards per game) and they even led the league in sacks. At the same time, they only had a 1-1 record while scoring 51 points and allowing 51 points. That looked pretty middle-of-the-road, and the Cowboys ended up being exactly that last year: a middle-of-the-road team with an 8-8 record.

This year, the Cowboys are once again 1-1, but have allowed 44 points while only scoring 31. Going by these numbers only, the Cowboys look worse than they did last year. So is this a team that will have trouble putting a winning record together, or are the Cowboys a team that can make the playoffs?

After the break, we do a little number crunching to get a better feel for where the Cowboys currently stand.

For our a crystal ball, we'll use the Pythagorean Formula. We've used the formula before (for more details, go here) so I'll be very brief: The formula was developed to measure overall team strength, on the hypothesis that a team's true strength could be measured more accurately by looking at points scored and points allowed, rather than by looking at wins and losses. This is the NFL version of the formula:

With the formula, we can take a stab at projecting how many wins we can expect for each NFL team based on the results of the first two games. Of course, the formula was initially developed for baseball, where a season consists of 162 games, so using the formula after only two games does not meet any requirement for statistical validity, but bear with me, it could be fun.

Before we get into the nitty gritty of the 2012 numbers, here's a look at how the Pythagorean Wins developed week by week for the four NFC East teams last year: 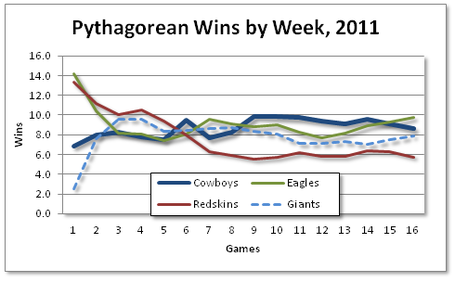 The Pythagorean began predicting the Cowboys as an eight-win team as early as week 2. The Eagles and Giants also began oscillating between eight and ten wins as early as week two. It took a little longer for the Redskins to zero in on their eventual five-win record; after jumping out to a 3-1 start, it took six successive losses to bring the Pythagorean Projection all the way down to their eventual five-win tally.

The point here is that barring significant changes in a team's performance, the formula can be a good early predictor of what a team's eventual record could be. Last year, I did the exact same exercise after two weeks, and the projection for the Cowboys at the time came out to exactly 8 wins. Here's what I wrote at the time:

With 51 points scored and 51 points allowed, you don't need a fancy pants formula to tell you're looking at an 8-8 team, and that's just exactly what the formula currently projects for the Cowboys: 8.0 wins.

In fact, for the last three years, the Cowboys' Pythagorean Projection after two weeks has been a fairly accurate early indicator, projecting the final regular season record to within 1.5 games:

As you read on, keep in mind that the Pythagorean Projection is not a prediction, it is merely a projection based on the currently available data. As the data changes, so will the projection, and the more data points the model gets, the more robust the projection will be.

For now though, the projection for the Cowboys, taking their 1-1 record into account, is for 5.3 wins this season, based on the two games played so far. That's certainly not what most fans want to hear, but that's what a loss by twenty points in the second game of the season gets you.

But there's no need to give up on the season just yet. Two solid wins in the next two games would go a long way towards improving the Cowboys' 2012 projection. The Falcons started last year with a 5.9 win projection and made the playoffs with a 10-6 season. On the other hand, the Jets projected as 14.1-game winners after two weeks last season and ended up with an 8-8 record. And then there were the Giants of course, poster boys for "It's not how you start, it's how you finish."

We'll revisit this formula frequently over the course of the season, and after the next two games we should have a pretty good idea where this season could be heading. And perhaps our crystal ball will be a little clearer, and a little more Cowboys-friendly by then.

With all of the above in mind, here's how all 32 NFL teams stack up after two weeks: