The Cowboys, coming off of a major upset in New York, head into Seattle to take on the underdog Seahawks at home, and come away beaten badly. How does that happen?

The Cowboys were, surprisingly, 7 of 13 on third-down conversions, a 53% rate that indicates a team having success executing their game plan. Unfortunately, those conversions were spread out amongst the Cowboys' offensive possessions resulting in a lack of sustained drives throughout the game.

The Cowboys registered 17 total first downs (including the 7 on third downs). The big question, then, is what killed the Cowboys' drives? Seven dropped passes and an interception start to clear up that picture.

Follow the jump for a drive-by-drive breakdown of the Cowboys' (lack of) offensive successes. The All-22 film isn't yet available, but I threw in some freeze frames from the broadcast.

The first drive: After setting up a manageable third and five, the Cowboys drive ends on the following play:

The pass was dropped by Jason Witten, and would have been a gain of at least 7 yards.

The second drive: The Cowboys convert three first downs on the drive:

The next bad drop of the day comes here from Dez Bryant. 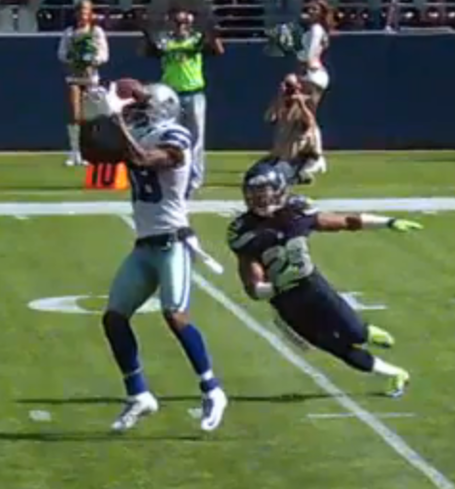 The difference between this and, for example, Victor Cruz' drops last week, is that Dez isn't looking upfield before securing the ball. He looks directly at the ball the entire time, the same technique that had made him previously one of the league leaders in (low) drop rate. Much like Witten, however, the proper technique simply does not translate to receptions on some occasions.

The play would have been good for 12 yards (running total: 19 yards).

The drive is ended on the next play courtesy of an interception to Brandon Browner.

Let's take a closer look at that. 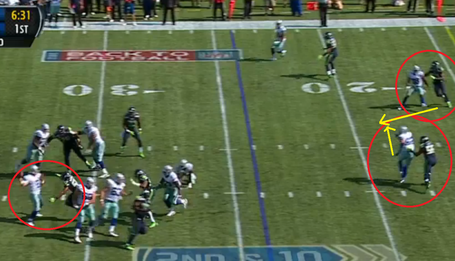 You can see that Romo is being pressured up the middle on this throw, preventing him from stepping into his throw. This has no impact on the play, however, as the ball is delivered accurately and with high velocity to a place where only Jason Witten should be able to make the play. You can also see that Witten is being covered by a linebacker while Ogletree is covered by Browner, who makes the interception. 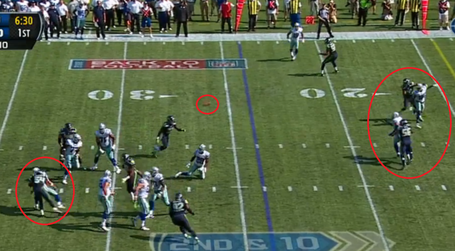 Now that the ball is in the air, you can see how the interception actually occurred. Brandon Browner takes hold of Kevin Ogletree with both hands, shoving him out of the way. The linebacker covering Witten grabs hold of Witten by the back of his jersey, slowing him down on the way to the ball.

Both of these acts, individually, are considered defensive pass interference. Not surprisingly, neither is called by the officials. The two uncalled penalties allow Browner a clear path to the ball - something that would have been impossible if Witten were unimpeded in his route (there's no way Browner could make a play through Witten's body - he's just too big).

The play would have been another 7-yard completion to Witten, setting up a manageable third-and-three, and a likely DeMarco Murray run.

The third drive: On this lone highlight-drive, the Cowboys march 95 yards down the field, accruing 5 first downs and a touchdown.

Immediately after this first first down, however, the dropped pass comes back to haunt the Cowboys.

On this play, Witten is hit in stride with a 50-yard bomb, and watches it sail through his close-to-his-body hands. 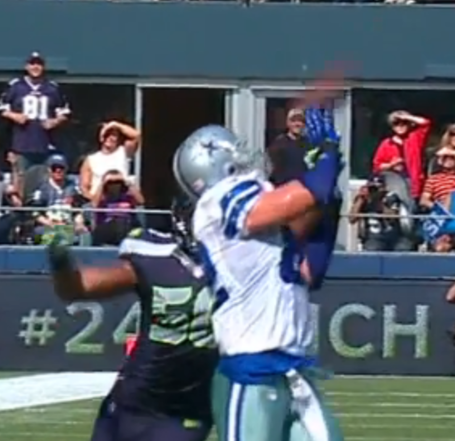 And then the dropped pass comes back - and it's once again Jason Witten.

The ball again is placed between the hands of Witten, this time with no defenders around. 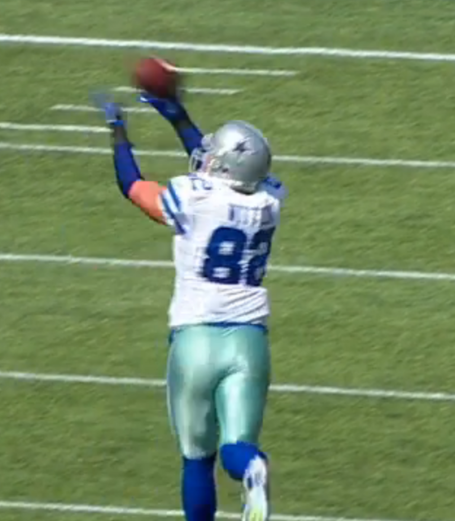 The ball was dropped at the 23, and it's very safe to assume that Witten would have made it to the 20 before being leveled by either safety. It's worth noting that, in the second quarter, the Cowboys were playing with the sun at their backs. Looking back for the ball may have been more difficult for this reason (though it doesn't excuse the two first-quarter drops). 25 lost yards to another drop (running total: 94 yards).

Much like the Giants game the week before, the Cowboys were able to overcome their mistakes in order to score. Unfortunately, this would be the only time they do so.

The fourth drive: This three-and-out ended on a third-and-2 "drop" by Dez Bryant.

Bryant made a leaping grab, pulled the ball out of the air and towards his body, and was simply stripped while pulling it tight to his chest. Earl Thomas made an incredible play on the ball - much closer to a strip than a true pass break-up.

The fifth drive: After allowing Seattle to extend the lead to 13-7, the Cowboys took over with a chance at a two-minute drill.The drive manages two first downs before ending in a punt.

The drive again ends on a "drop," this time by Miles Austin. Some might believe this is a bad throw (Miles Austin going up in heavy traffic), but a similar play went for a touchdown last week in New York. This one didn't have touchdown potential, but it's a play Miles Austin can make.

On further review, the ball was tipped into the air at the line of scrimmage, something the broadcasters completely overlooked. I can't tell who the pass was intended for (perhaps a more open Miles Austin?) until the All-22 becomes available. The ball was stripped by Earl Thomas in the air.

The sixth drive: Kneel down ends the half.

The seventh drive: No highlights here as Dallas manages only a single first down.

The Seattle defense, at this point, is looking just like what we want from our own men. They play tight man coverage downfield while managing consistent pressure on Romo. I can only hope that we employ a similar tactic in future games - the conservative defenses kill me.

The eighth drive: After a long Seattle touchdown drive (90 yards), the Cowboys take over down 20-7. After two first downs, the Cowboys once again punt to Seattle.

The drive-ending incompletion came on an improvised deep ball to Miles Austin. There was some miscommunication (if you can call failed psychic messaging a miscommunication), and Miles Austin broke off his route and stopped, rather than turn upfield as Romo had wanted. I agree with Romo's decision on the play, because Seattle had been very quick at breaking upfield on passes, but not as effective covering deep balls downfield.

The game ends with an unspectacular three-and-out followed by a meaningless three-play, game-ending attempt at a last-second score.

Some key drops in this game were a large portion of the difference in the final score. Some balls were batted at the line, and at least four balls were dropped that should have been caught (unforced errors, if you will). Some foul play on an interception also contributed to turning an admirable effort from our quarterback into a complete team loss.

Both teams tried hard. This wasn't a difference in effort. The Cowboys simply had more individual mental lapses than the Seahawks, and whether you attribute that to the 12th Man or the hangover following a big win in New York, that was largely the difference in the game.

In closing, I offer my explanation for the loss, copied from an email conversation with the other writers:

They (broadcasters) looked closer at the dropped passes, expecting it to be a concentration problem (taking eyes off the ball and turning upfield early) but that wasn't the case. The receivers were looking the balls in and simply not securing the catches. That isn't a lack of effort, or a flaw in technique. They did it the same way that got them to the tops of the good hands charts year after year.

The defense caved in the second half? Aided heavily by poor play from the backups (Victor Butler, Sean Lissemore, Josh Brent). The front 3 that was already missing Ratliff lost a second starter in Coleman and a key run-stuffer in Spears. The replacements couldn't contain Lynch and he ran all over them. He didn't do it against tired starters who were out-physicalled. He did it against backups who were fresh but simply not good enough.

Our strengths are our receivers and our corners, as far as game-changers. Their strengths are their corners (which shut down our receivers) and the running game (against which our corners don't have much impact). Subtract two starting safeties, two starting DLinemen, and, briefly, a starting linenbacker... and you don't need to claim mental incompetence to rationalize the loss.