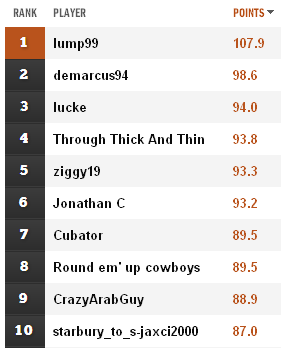 The second week of SBNation's Pick 6 Fantasy Football is in the books.

This week, 182 BTB members took part, up from 141 participants a week ago. Week Two was won by BTB-member lump99 with 107.9 points, as you can see from the BTB Top Ten leaderboard shown on the right hand side of this post. And lump99 did us all proud: he or she ranked seventh overall among the couple of thousand of people taking part in the contest across the SBNation network.

Just as a reminder of how the game works: You have a fantasy budget of $120 with which to pick six players (QB, RB, WR, TE, K, Wildcard). Player pricing is determined by how often a player was selected for a lineup in the previous week. So you need to spend your money wisely - popular players rise in value, less popular players will be more cost effective. Best of all, this game doesn't require a season-long commitment, you can basically jump in at any time.

So if you want to be featured on next week's leaderboard, you'll need to have your picks entered prior to 8 p.m. ET on Thursday, before the Giants kick off Week Three against the Panthers.

Think you have what it takes? Click on the banner below and you'll be taken directly to the Pick 6 welcome page, where you can select the players to fit your $120 budget.