The dreadful performance in Seattle is almost behind us, but there is a sequence of events that I would like to take a closer look at before I completely move on from last Sunday's game. Game and clock management are vital to the success of any NFL team. It's extremely difficult to win in the NFL, so you must take advantage of the opportunities that are given to you.

Head coach Jason Garrett was criticized last season for his clock management. One game that stands out is the Arizona game where Garrett "iced" his own kicker. Dez Bryant's 15-yard reception on third down gave the Cowboys a golden opportunity to wrap the game up.

Instead of using a timeout with 26 seconds left, Garrett let Tony Romo hurry up to the line and spike the ball. It's possible that the Cowboys could have made the field goal attempt closer than 49-yards, or they could have simply won the game.

Even though he was following the direction of his special teams and kicking coach, Garrett may have made the wrong decision in calling a timeout while Dan Bailey was attempting a field goal. After making the field goal that didn't count due to the timeout Garret had called, Bailey missed the second field goal attempt and the Cowboys later lost the game in overtime.

Last week against Seattle, Garrett once again decided against using a timeout. It's debatable, but opting to run the hurry-up offense may have given the Cowboys an edge on the play. 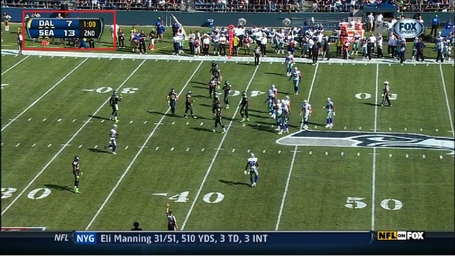 The Seattle Seahawks are leading the game 13-7 late into the second quarter. Tony Romo and the rest of the offense have had trouble moving the ball, but most of it could be attributed to turnovers and dropped passes. The Cowboys really must get a drive going and put some points on the board before halftime.

Dallas finally starts to get something going, and they look like they could get back into the game. After a 7-yard completion to Miles Austin, the Cowboys face a critical third down situation at the Seattle 47.

Instead of huddling up, the Cowboys decide to run a no-huddle, probably attempting to create a mismatch with the personnel Seattle has on the field. But look at the top left of the screenshot, Dallas has all three of their timeouts left.

Jason Garrett wants to get into a rhythm on offense, but this is a critical point in the game. It may have been wise to take one of his three timeouts here, but in my opinion Garrett did make the right decision. 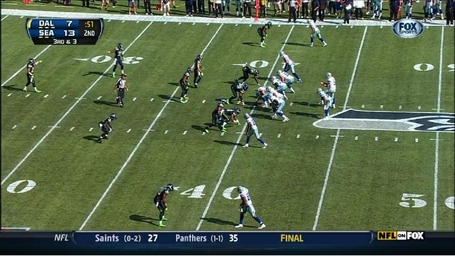 Romo quickly assembles the troops into the "S11" personnel grouping.This is a shotgun formation with a three-wide receiver set, and tight end Jason Witten is split out wide. Nobody on the Seahawks decides to come up and press Witten at the line of scrimmage. 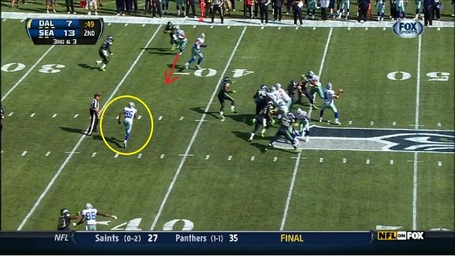 The Cowboys run short routes in order to pickup the three yards needed for the first down. Witten and Austin run routes designed to confuse the Seattle secondary. Witten runs an "in" route to the sideline, while Austin runs a slant back to the inside.

Because the defender responsible for Kevin Ogletree is playing so far off, Ogletree streaks across the middle of the field wide open.

At first, it appeared that maybe it would have been a good idea for Garrett to call a timeout and talk the play over, but the no huddle gave the Cowboys an advantage. Seattle isn't properly set up in coverage to stop our wide receivers. This was a well designed play because nearly all of the routes beat the defense. 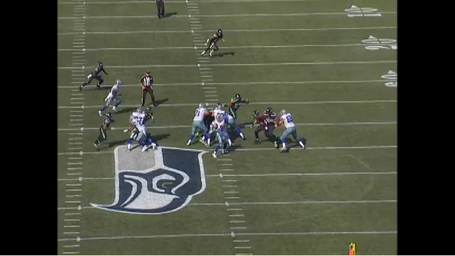 Romo doesn't look for Ogletree on this play, which is unfortunate because he would have been the easiest option to pickup the first down here. Instead, Romo looks for either Austin or Witten. I am not sure exactly who he was targeting here, but Austin is officially credited with the target.

The reason this play doesn't work is because of the pressure generated by the Seahawks. Seattle blitzes defensive back Chris Maragos. Maragos times his blitz perfectly, easily getting between Mackenzy Bernadeau and Doug Free.

Free is confused and distracted by the blitz, allowing defensive end Chris Clemons to get into the backfield and deflect Romo's pass. Running back DeMarco Murray is lined up on the other side, so Free doesn't get any help with the blitz. 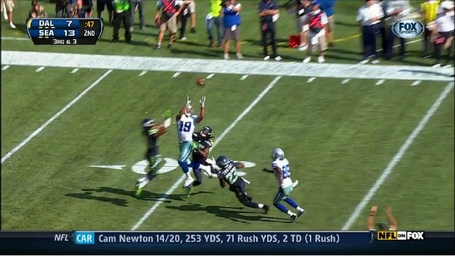 Miles Austin hustles and saves a tip-drill interception. While I was watching this play, I really applauded Austin for making the effort he did there. Austin is one of the best at going up and snatching the football away, and he nearly comes away with the reception.

I know that some were calling for Jason Garrett to go for it on fourth down, but he probably made the right decision. It was too risky to give Seattle the ball back near midfield, so I don't have a problem with the way he handled that situation.

The Cowboys weren't receiving the football in the second half. If Garrett didn't trust his defense, he would have gone for it. Garrett trusted his defense and decided to let punter Chris Jones pin Seattle inside their 10 yard line.

The Cowboys ran the perfect play to pickup the first down, but Tony Romo didn't get a clear passing lane to throw the football. Had Romo completed this pass, it's possible that the Cowboys continue to drive down the field and make this a football game again.

Regardless of the outcome of this play, the positive to take away from it is that our receivers were in the position to make the play.