Doug Free Is Having Issues, How Long Can Dallas Be Patient?

Sometimes, what seems like a good decision at the time turns out to be a total and complete disaster. Right now, the long-term contract the Dallas Cowboys gave offensive tackle Doug Free is starting to look like one of the biggest mistakes the team has made in recent years. He got the contract based on his performance in 2010, but since then he has not only gotten worse, he has become a true liability for the team. He was not good enough at left tackle last year and was switched with Tyron Smith to take the right tackle spot. And he has gotten off to a horrid start in 2012.

Against the Tampa Bay Buccaneers, he had an absolutely miserable game. He was the single biggest contributor to the torrent of penalties, getting flagged for three false starts in his own stadium. But that pales in comparison to one play when he made an error that was not only inexcusable, but that could easily have cost the Cowboys their quarterback, Tony Romo.

I have no idea what has happened. I don't know if there is nagging back injury, as has been rumored. I don't know if he just was one of those flash-in-the-pan players who will never be able to replicate his one good year. What I do know is that he continues to make serious mistakes and fail to get his job done. With a contract running through the 2014 year and a 5,375,000 cap hit this year, he is seen by most as too expensive to cut or even sit.

Well, is Tony Romo's health less valuable than that?

While all players get beaten sometimes, the one play that could have seriously injured Romo was a pure case of Free failing to do his job. The Cowboys are in the shotgun on 3rd and 4. The ball is snapped with 2:08 left in the third quarter. 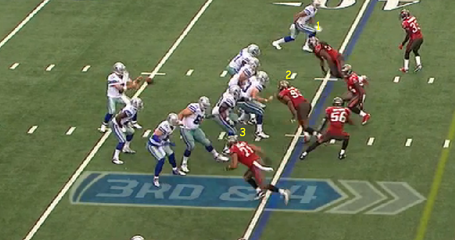 At the snap, the Buccaneers only send three pass rushers, with everyone else dropping into coverage. Jason Witten and Felix Jones are both in for protection, so there are seven blockers to handle only three pass rushers. This should not be a problem. 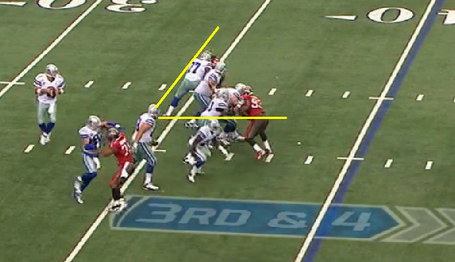 In the next shot, you can see where Jones has released to go into the flat, which he should do at this point. The other linemen and Witten are engaging their players, but for some reason, Free assumes that Witten has Michael Bennett in control, and turns to look at the other action. Given that there are no other Buccaneers anywhere close to the line, this just seems a case of abysmal situational awareness. 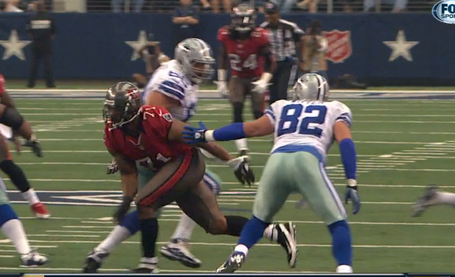 Witten pushes Bennett to his left, where he is expecting help from Free, but he can't help much with his back literally turned towards his responsibility. Bennett breaks loose at a dead run. 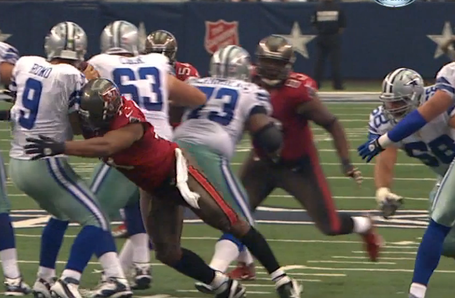 Tony is hit, the ball is knocked loose, and Tampa Bay recovers a fumble. Fortunately, the Dallas defense had a really good game, and the Buccaneers called one of the most conservative game plans for 58 minutes that I have seen in years. But that does not change the fact, that, well, this:

Doug Free may have had the worst game by a Cowboys offensive tackle since Alex Barron's struggles to open the 2010 season in Washington.

Dallas has problems all over the offensive line, but right now Free is clearly the biggest liability. He is just bad right now. I don't pretend to know the answer, because a look around the league shows that Dallas is not the only team having major issues with the offensive line. There are not any plug and play improvements out there that I know of.

Is it time to take the chance on Jermey Parnell? I know it may be scary, but Free has almost gotten Tony turned into roadkill. This is one of those times to ask if it can get any worse. Watching Free's performance raises some questions about whether he or the coaches can fix his issues.

Something has to be done. Right tackle is the weakest link right now, and using the O ring theory OCC has popularized here, that means the team will get no further than this flaw allows them. Benching Free to try Parnell seems like a huge gamble. But how much more of a risk is it? I think that the team almost has to try it at this point. Thankfully, I don't have to make that call, but Jason Garrett and company need to make some kind of move. At the moment, Garrett seems to think that Free can be fixed.

"I think he needs to be firmer. There were times in the ballgame, the defensive end got into him and knocked him back. But there were other times he regained his anchor and sat in there and blocked him pretty well. Being consistent and not getting pushed back into the quarterback would be first and foremost."

I get standing by his players and all that, but this does not seem like a good time to keep on doing what you have been doing. Of course, the team doesn't always tip its hand. Last week, they kept it a secret that Brandon Carr was going to step in at safety. Just because Garrett says right now that Free is the starter, it doesn't mean he will be on Monday.

What do you think the team should do?