Get Your Picks In: Pick 6 Fantasy Football on BTB

The third week of SBNation's Pick 6 Fantasy Football is in the books. We take a look at the winners and remind everybody to take part in the week four contest.

Share All sharing options for: Get Your Picks In: Pick 6 Fantasy Football on BTB 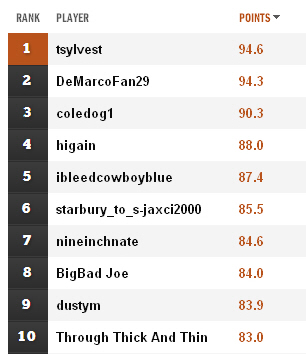 The third week of SBNation's Pick 6 Fantasy Football is in the books.

This time around, we had 147 participants, down from 182 last week. BTB-member tsylvest emerged as the winner with 94.6 points, which he collected with a team featuring Andrew Luck at QB and two kickers, Jason Hanson of the Lions and Lawrence Tynes of the Giants.

This post is intended both to highlight the winners of last week and to provide an easily accessible link to the Pick 6 site. With the new site design, we have received numerous requests about where to find the links to the game.

Just as a reminder of how the game works: You have a fantasy budget of $120 with which to pick six players (QB, RB, WR, TE, K, Wildcard). Player pricing is determined by how often a player was selected for a lineup in the previous week. So you need to spend your money wisely - popular players rise in value, less popular players will be more cost effective. Best of all, this game doesn't require a season-long commitment, you can basically jump in at any time.

So if you want to be featured on next week's leaderboard, you'll need to have your picks entered prior to 8:20 p.m. ET tonight before the ravens kick off Week Four against the Browns.

Last week, our front-page writers came in with mixed results: Dave ranked 32nd, I came in 80th and KD found himself sitting at the numerically auspicious 111th.

Think you have what it takes to beat all three of us this week? Click on the banner below and you'll be taken directly to the Pick 6 welcome page, where you can select the players to fit your $120 budget.