The first half of the Cowboys' victory over the Buccaneers featured many impressive individual performances, as well as some less impressive busts. Here, I've highlighted nine plays that stood out to me in the first 30 minutes of play.

Let's not waste any time and get right to the breakdown. I've been very busy with school projects recently, but I'm happy to have the opportunity to roll out another collection of Freeze Frames. Those projects keeping me busy, 2d Animation and Interactive Digital Media, may help to enrich future content.

Anyway, on with the show: 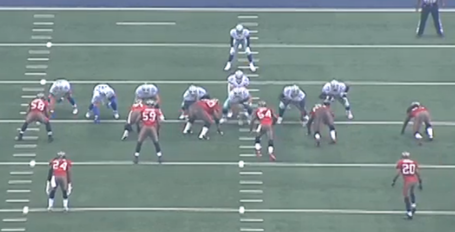 Much has been made of the Cowboys' difficulties executing in the running game so far this season. Lack of blocking up front has been one of the key constituents of complaints regarding the offensive line, and the game against Tampa did little to avail those fears.

In this play, however, our offensive line showed some signs of life. 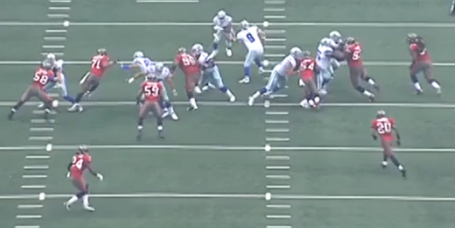 Tampa Bay isn't running anything fancy on this particular play, which is to the advantage of our offensive line - they're all big, powerful blockers who play well charging straight ahead; most of their trouble comes against stunts (a continuity issue more than anything).

Mackenzy Bernadeau, to the left of Romo, and Ryan Cook, to the right, open up a wide lane for DeMarco Murray, who is able to rush forward for a decent gain. Doug Free's ability to finish at the second level is still in question, but 4 out of 5 isn't bad. 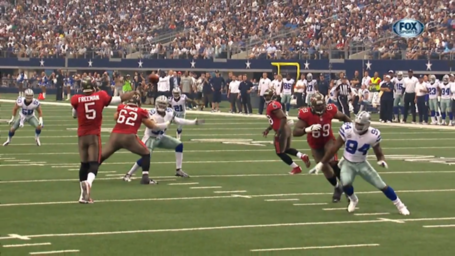 The second play we'll look at is Sean Lee's interception. The view from behind Josh Freeman shows a few interesting points. First, Sean Lee is quite far from the play, but is already shifting toward where the ball will be later in the play. His instincts are uncanny. Second, Anthony Spencer has been playing his opponent at arms' length, allowing him to disengage quickly and react to the throw. 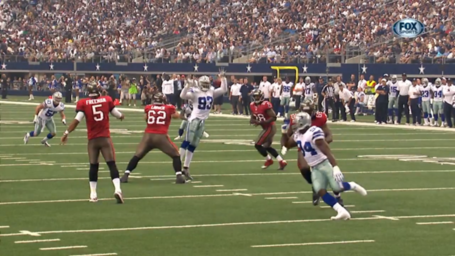 Spencer nearly engulfs the ball, which flies narrowly between his helmet and arm. His jump obscures the running back's vision, however, and impacts his ability to make the catch. This type of play by Spencer is rarely appreciated, and may be viewed by many as a failed pass rush. In reality, he plays nearly all of his assignments at arms' length, near the line of scrimmage, reading the play and preparing to pursue the ball.

In this play, we see the Cowboys in an unexpected alignment. Ware is playing as a wide rush end, but who's that opposite him? Marcus Spears is playing strong-side defensive end, in a 4-3 front. I honestly never thought I'd see the day. Just wide of him is Bruce Carter. The two tackles are Hatcher and Brent, with Sean Lee and Anthony Spencer showing a double-A-gap blitz. 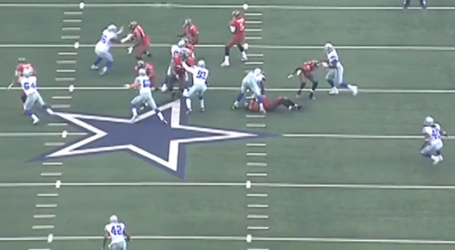 The blitz, it turns out, was a bluff, as Spencer and Lee take steps toward the line of scrimmage (baiting the linemen into attacking them), and then back away from the play to create rush lanes inside. Brent appears to be taking advantage, but the one who ends up capitalizing on the play is Ware. The poor TE left blocking him (the left tackle had to block Hatcher, as the left guard was pursuing Spencer downfield) has no chance, and Ware closes for the strip-sack. 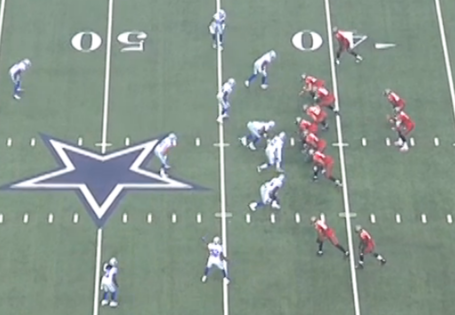 This next play stood out to me because of the bunched receivers at the bottom of the formation - a concept that has consistently baffled our secondary in the past and led to many broken coverages (bunched tight ends led to Seattle's first offensive TD in week 2). Immediately, Jenkins and Scandrick begin communicating responsibilities.

The defense ends up dropping 7 into zones, as I've illustrated. Bruce Carter has stepped up to carry the crossing receiver (Mike Williams), as Lee is dropping deeper, cheating to Vincent Jackson's deeper cross. The 4-man rush has begun to close in on Josh Freeman. 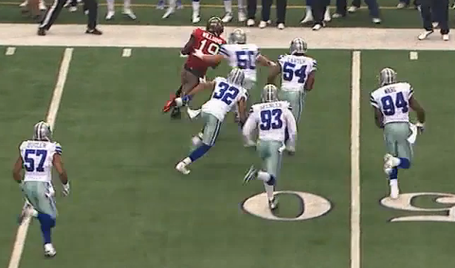 Finally, I want to show you the end of the play. The bottom three men pursuing the play are Ware, Spencer and Butler, all three of whom were in that red circle, rushing the passer, in the previous image. That high level of effort, to rush downfield and not give up on the play once it passes you, is something I'm happy to see out of this team. It's very right-kinda-guy-ish. 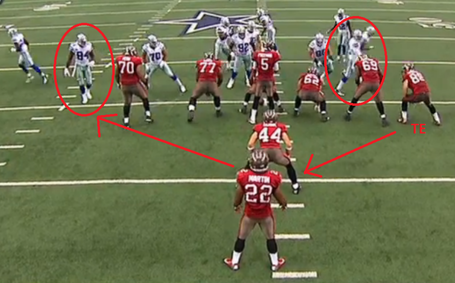 In Seattle, it became apparent that part of the opponents' offensive gameplan was to scheme DeMarcus Ware into coverage by putting a tight end in front of him. Rob Ryan was criticized for not scheming to counter this, and guaranteeing Ware ample opportunities to pass-rush.

Tampa Bay did their duty in the film room, and was planning to shift help to DeMarcus Ware's side of the field. The TE will drop into the backfield, while the FB moves up to the line on Ware's side. 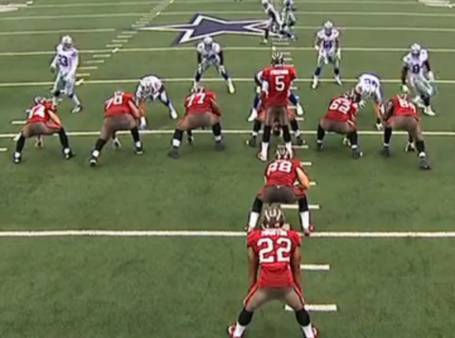 As soon as the motion begins, however, Ware and Spencer quickly rush to switch sides, giving Ware another one-on-one opportunity against a tackle. Soon after, the tight end shifts slightly left into an offset I. 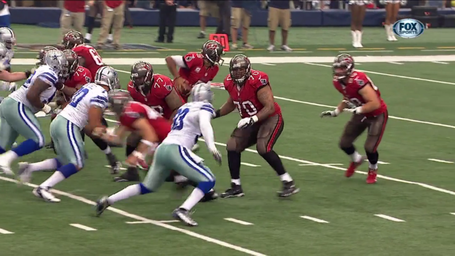 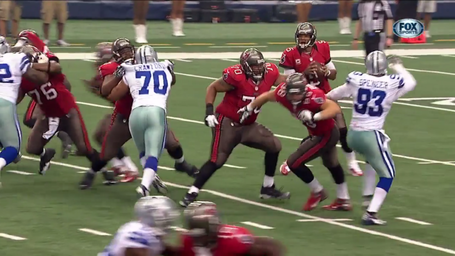 The tight end sees an opportunity and delivers a shoulder to Spencer's hip, knocking him wider and throwing him off balance, allowing Penn time to recover. Note also number 70, Tyrone Crawford, working inside (he's drawing a holding call). Crawford has Tampa's left guard completely off balance, as you can see his outside foot has been uprooted, which is essentially turning a wall into a gate, as Crawford is able to turn that guard's body into the backfield and continue his rush to the quarterback (or he would've, but he's being held). 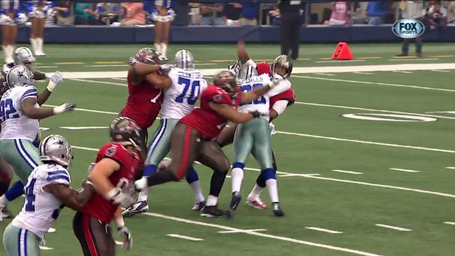 Crawford manages to continue moving through the hold. Spencer plants a nice hit on Freeman, slamming him to the ground. And that guard Crawford's been abusing? None other than Carl Nicks.

On this play, we see the Cowboys back in a familiar formation. This time, the strong-side end is Sean Lissemore, playing all the way out in the 9-technique. It's hard to verbalize exactly how strange it is to line up 300 pounds that wide of center. Lee and Spencer once again are showing a double-A-gap blitz, and this time we see Bruce Carter lined up nearer to Sean Lee (cheating back into coverage - they're actually blitzing this time).

Jason Hatcher has been supplanted by Tyrone Crawford, who appears to have gotten into Carl Nicks' head. Nicks ignored his responsibility to pick up Spencer and attacks Crawford. The left tackle, Penn, notices this error and attempts to pull to seal off Spencer (is this a designed tackle trap? If so, they failed miserably), leaving DeMarcus Ware one-on-one with a tight end. What was that talk about Rob Ryan not being able to create mismatches consistently? 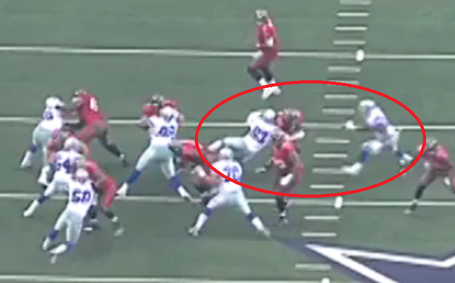 Penn never gets to Spencer, who dives and latches onto the running back. DeMarcus Ware helps to finish the play, though he wouldn't have gotten there had Spencer not made first contact. I could get used to seeing this formation more often in the future.

This play turned out to be positive (Orie Lemon fumble recovery), but it was very nearly disastrous. There are 8 men rushing the kick, and 8 men on the line to protect. What goes wrong?

The blocking up front is man-to-man, and the four defenders on the right are only blocked by three line players. Phillip Tanner, who was the personal protector, moved up to play in-line and pick up the widest rusher. He should have been back to pick up the free runner up the middle. I'm no special teams expert, but I believe the philosophy is to block inside-out. This was an utter failure. I wouldn't blame Dan Connor, either, as he's blocking the inside man. Phillip Tanner and Barry Church simply failed to secure the edge. 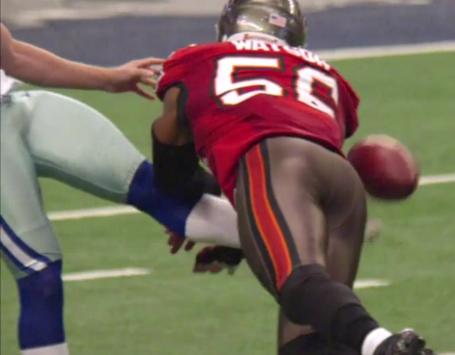 And this, ladies and gentlemen, is why we signed Brian Moorman. Jones is hit just below the knee as he's extending. That's a fine recipe for a hyperextension, as the force that normally is absorbed by the upward rotation on the hip joint is instead forced to disperse through the knee joint. Jones is tough for staying in the game to hold - I'm surprised he could still walk after that hit. 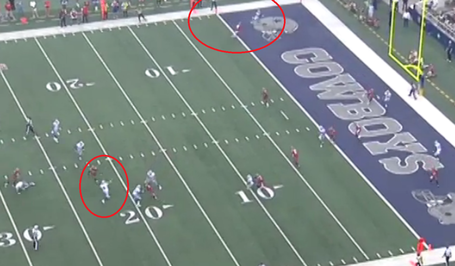 This is the infamous tripped-by-the-refs-hat play, and watching it again was infuriating. The above capture is of Romo's release, showing Ogletree, still upright, preparing to break on the ball. 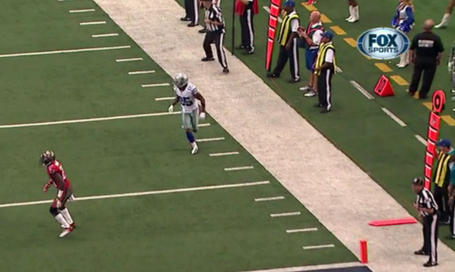 Stepping back in time a bit, we look at the official who threw the hat. He's staring down the goal line, oblivious to Ogletree's presence. This is also the closest Ogletree ever gets to the sideline.

At this in-cut, the official switches his attention to Ogletree, and watches him turn upfield. It's not until nearly a full second later, after Ogletree had clearly shown his intentions, that the referee reached up, grabbed his hat, and threw it under the Tree's feet.

This is the most premeditated-evil-looking play I've seen since the Jets' strength coach tripped a player on a special teams play. I seriously question the intentions of this man, and am personally glad he no longer has the opportunity to meddle with the outcomes of NFL games.

On this final play, we see the Cowboys in their traditional 4-2-5 Nickel, with the front 4 consisting of Spencer, Lissemore, Hatcher and Ware. Carter and Lee are the linebackers. 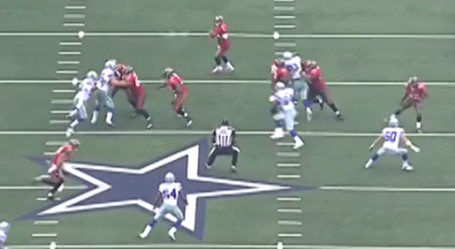 When's the last time we've seen line stunts well-executed by the Cowboys? At the snap, all four players rush outside, but Spencer and Ware break off their outside moves and twist back inside toward a wide open middle. Only the center is left to challenge the two rush linebackers, as each interior defensive lineman has now acquired a tackle-guard double team. 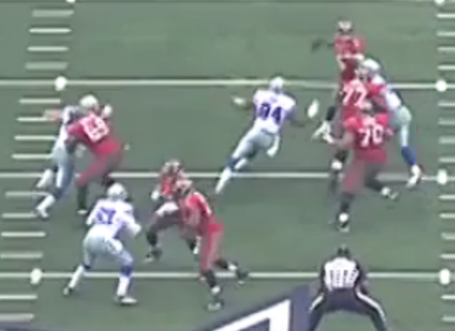 The Center chooses to help on Anthony Spencer and allow Ware to rush cleanly up the middle. Jason Hatcher is the bigger success story, though. 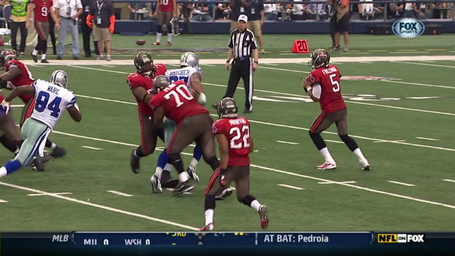 Seen here being hugged by both Carl Nicks and Donald Penn, Hatcher rushes through the line and gets to Josh Freeman, making it look easy. 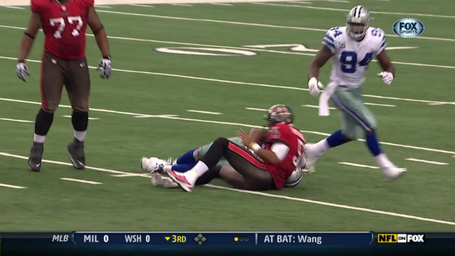 He finishes the play, forcing Freeman to pick himself up after the play.