Rob Ryan has his defense playing some great football. Because the film never lies, we take a closer look at what the defense did against the Tampa Bay Buccaneers.

The NFL has transitioned into a "passing league", but defense is still what wins games. After just three games the Dallas Cowboys are the #1 ranked defense in the NFL. It's way too early to get our heads filled with the idea of having the best defense in the NFL, but this is a defense that has vastly improved.

Defensive coordinator Rob Ryan was criticized (rightfully so) for the way he called the game against the Seattle Seahawks. He failed to adjust during the game, but he also didn't properly scheme against rookie quarterback Russell Wilson.

This week was a different story. Ryan called a fantastic game and continued to adjust throughout the game. We did lose safety Barry Church for the season, but even prior to his injury Rob Ryan began moving cornerback Brandon Carr back at safety. 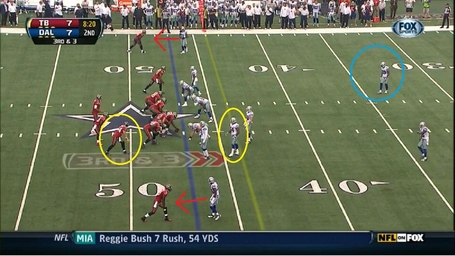 The Buccaneers come out in a shotgun set. Notice the press coverage on all of the Tampa Bay wide receivers. Having the ability to play press coverage really takes away a lot of the threat in the passing game. Brandon Carr is back deep at safety with Barry Church.

Tight end Dallas Clark starts off to the right of Josh Freeman. Bruce Carter is lined up directly over the top of him. Having Carter at linebacker has changed the way we can scheme our defense. Carter isn't the liability that Keith Brooking or Bradie James were. 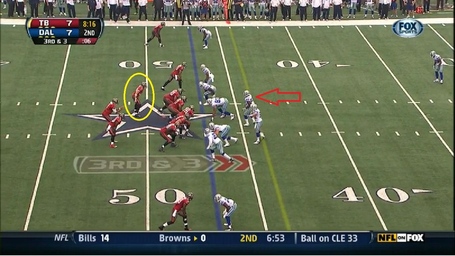 Before the snap Clark motions over to the left. Carter immediately follows Clark over to the other side. 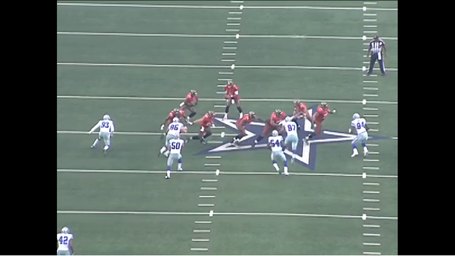 At the snap Freeman runs a fake to running back D.J. Ware. This is actually a good play design because it gets the defense moving one way, but the play is actually going to the other side. Carter is an excellent athlete that has great footwork. He keeps his balance and quickly shuffles his feet according to where the play goes. 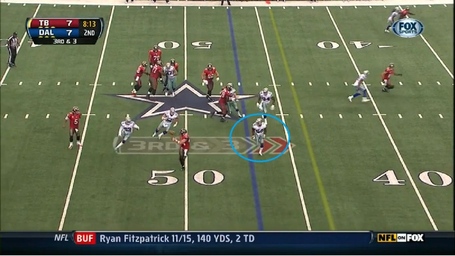 Carter is in pursuit while Freeman makes his throw to Clark. Look at the amount of ground Carter has to cover on this play. His athleticism definitely brings a certain element that this defense has lacked the past few years. 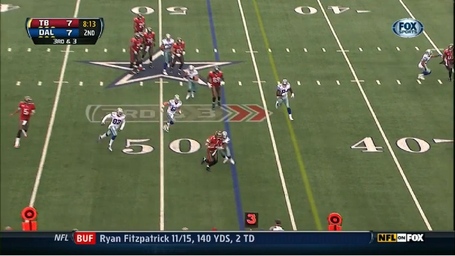 Clark attempts to turn up the field to get the first down, but Carter is just too quick. Carter flies in to make the tackle and out comes the Tampa Bay special teams unit. If this were Brooking or James, the Buccaneers would have picked up this first down. 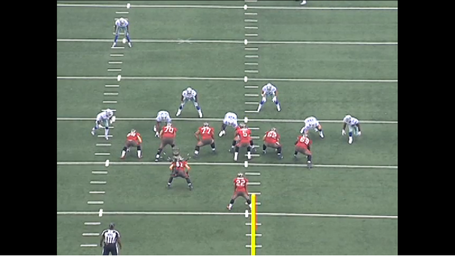 In this play the Cowboys are operating out of their base 3-4 defense. This is one of our strongest personnel groupings because Jason Hatcher, Josh Brent and Sean Lissemore are a great combination of run stopping and pass rushing ability. 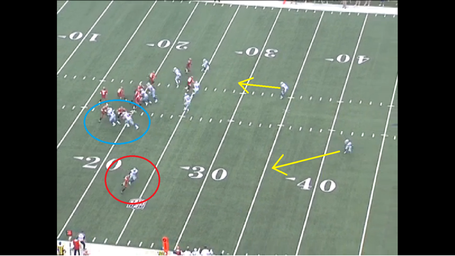 Brandon Carr really put Vincent Jackson on smash in this game. The Cowboys are starting to become one of the best secondaries in the NFL. Their ability to play press coverage takes away the oppositions best wide receiver.

Carr is right on the hip of Jackson, but he does have safety help over the top of the field from Danny McCray. Barry Church is keeping the action in front of him on his side. He has the option to pickup the tight end or wide receiver, but he is in great position to make a play on either option.

Lissemore and Ware should see more time on the same side of the defense. They are just a problem for any offensive line when they run a stunt or designed rush. 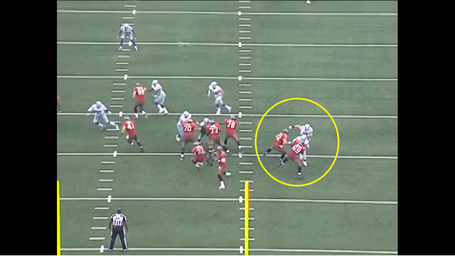 Right tackle Demar Dotson does a pretty good job on Ware, but right guard Ted Larsen gets worked by Lissemore. With Ware pushing Dotson back, Lissemore bursts to the outside and Larsen is totally out of position and cannot make a play on Lissemore. 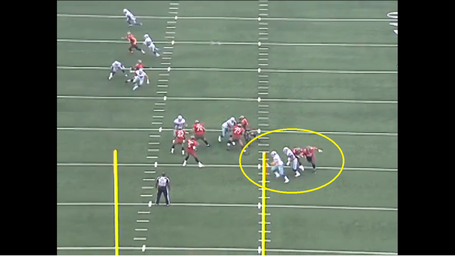 The pass coverage from the Cowboys on this play is excellent. Even though the Buccaneers have run play action, the Cowboys never fall for it. Everyone in coverage has done a fantastic job and executed their assignments.

Due to the coverage, Freeman cannot get the ball out early. The Cowboys' defense disrupted the Tampa Bay passing offense the entire game. You can't give Lissemore and Ware that much time because eventually they are going to beat whoever is blocking them.

Lissemore and Ware converge on Freeman, but Hatcher also gets in on the action. Nobody is open and the pressure forces Freeman to throw the ball away. 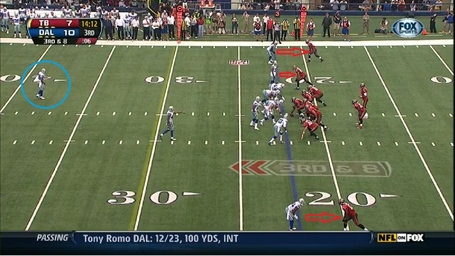 This is the very next play after the Lissemore pressure. Brandon Carr is back deep at safety again, while Barry Church creeps up closer to the line of scrimmage.

Rob Ryan decides to go with his man to man coverage on all of the Buccaneers' wide receivers. 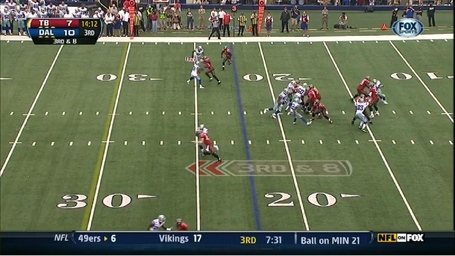 Church comes on a blitz and almost times it perfectly. Ware and Spencer begin to close in on Freeman, but the pressure from Church forces Freeman to make the throw without placing better touch on the football.

Freeman is going to Dallas Clark on a seam route up the field. Bruce Carter is step for step with Clark, allowing no separation. 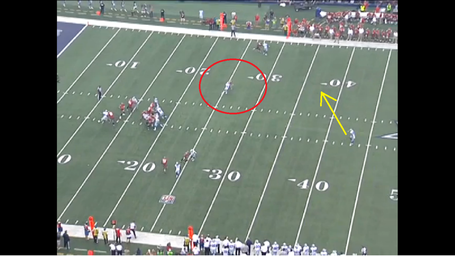 Carr may not be a natural safety, but he has a great feel for the position. Carter is carrying Clark up the field, but Carr must close in and make a play. Carr makes a quick decision and cuts right to where Clark is running his route. 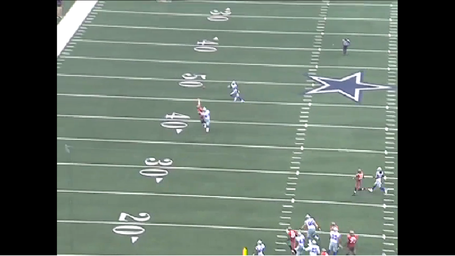 Freeman's pass is too far away from Clark to make a play on the ball. Carr nearly intercepts this pass because he makes a great break on the football. If Carr can continue to make plays like that, then he will be a really good option for us at free safety. 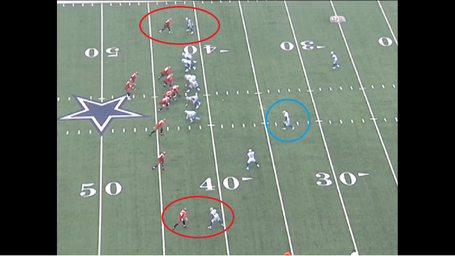 On this play the Cowboys run press coverage on the outside, but they decide to play off of Vincent Jackson in the slot. Carr is back deep at safety, while Mike Jenkins, Morris Claiborne and Orlando Scandrick line up at cornerback. This is where Rob Ryan really has to start playing Carr back at safety because Church is on the sideline after suffering an injury to his Achilles tendon. 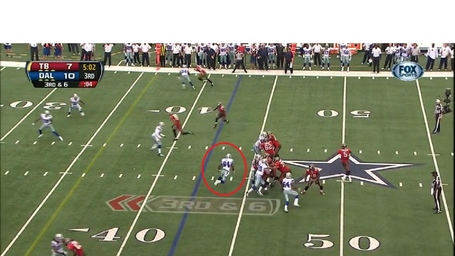 Rob Ryan blitzes Sean Lee, Bruce Carter and DeMarcus Ware. Spencer drops back into coverage on this play. Ware starts off pressuring from the outside, but he runs back inside. 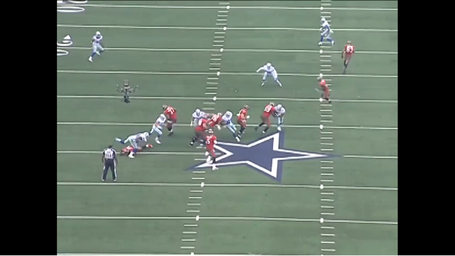 Left tackle Donald Penn is completely confused by the move Ware makes back inside. Penn pulls back to the right and attempts to take Ware out. This leaves Carter to be blocked by running back D.J. Ware, but he cannot take care of Carter on the outside. 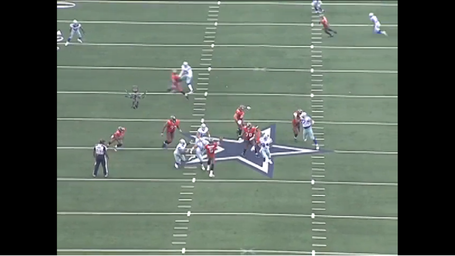 The coverage is excellent and nobody is open, so Freeman really has nowhere to throw the football. The pressure gets right in the face of Freeman, forcing the quarterback to make another errant throw. Tyrone Crawford continues to develop and grow as a defensive end. He is getting more playing time due to all of the injuries on the defensive line, but he is starting to make a contribution. 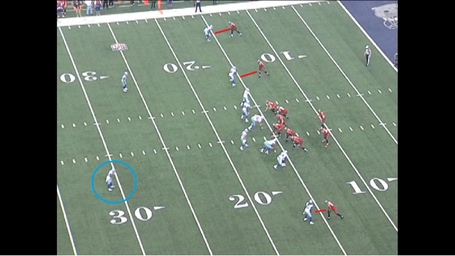 This is the last play I want to breakdown. DeMarcus Ware makes the strip sack, but I want to point out that this was primarily a coverage sack. We see Brandon Carr back deep at safety once again, with press coverage on all of the wide receivers. 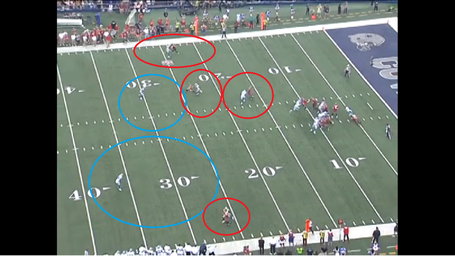 Danny McCray is on the left side of the screen, offering help over the top. On the right side, Carr is giving Mike Jenkins help on Vincent Jackson. The Cowboys completely took Vincent Jackson out of this game. Jackson was blanketed in coverage the entire game, but the Cowboys also locked down the other Buccaneers' wide receivers. 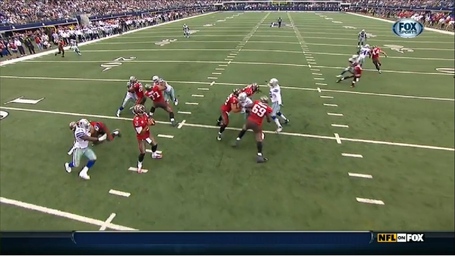 Freeman is looking for someone to throw the football to, but nobody is open. Ware blows by Donald Penn on the outside, while Sean Lissemore begins to beat two offensive lineman on the interior. 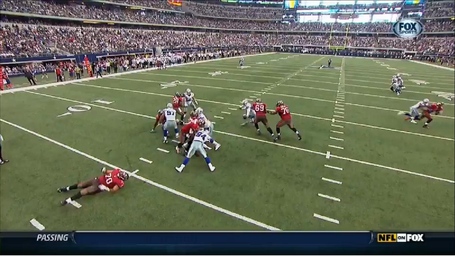 Ware strips Freeman and the ball shoots out. The Cowboys seem to have trouble recovering loose footballs, but I can't bash them for it. For whatever reason, the ball just never bounces our way. Look at Donald Penn laying on the ground. Ware has completely owned him, but Penn is fortunately in the right spot because the football ends up right next to him for the recovery.