Share All sharing options for: Cowboys Connected: News On Dez Bryant & Costa, PFF And FO Chime In, Plus More

Am I the only one whose football compass is completely off due to the Cowboys playing on a Wednesday night?

I love the fact that, coming off a hectic stretch that ended with a road win, Dallas has 11 days to prepare to play in what might be the toughest road environment in all of professional football. I'm just off as it pertains to the rest of the league. Obviously this was the first year Dallas was involved in the opening night game, so that has something to do with it; but the Wednesday game residue is just weird.

The point being is that the normal ebb and flow for a game week really isn't in play with three entire days before anyone else in the NFL kicks off. Our pre-game routine felt a little off as well- but all will be corrected once we get past this weekend's full slate of games. And hey, Dallas has 11 days to prepare for the toughest road environment in the league!

While other teams are making last minute preparations, Dallas fans and media are reveling in a hard-fought victory. Well, maybe not the media :)

Follow the jump for the latest news, including a "sourced" report on Dez Bryant's legal situation.

According to KRLD-FM, Bryant's attorneys met this week with the Dallas County District Attorney's office to negotiate a plea bargain in which Bryant will plead guilty to a reduced charge of a Class C misdemeanor for family violence.

If true, the clock starts ticking on a Roger Goodell decision. A suspension could be looming, and despite the speculation by writers, bloggers and fans near and far; no one really knows how that would play out. You'd hope the fact that Kenny Britt being suspended only one game after his eighth arrest would be a precedent setter (meaning, first offense for Bryant would not be more games, if any at all) but you just don't know. The infamy of the case, meaning higher amount of bad pub for the league might come into play. The controversial Dez rules might work in favor of no suspension. We'll all just have to wait and see.

What we didn't have to wait for was Dez Bryant doing Dez things in that first game. Dez had a big first half on Wednesday night, catching three balls on four targets, including a key 38-yard deep pass to set up the Cowboys first score before halftime. Dez would only be targeted once in the second half, for a completion, so there's that if you want to start rehashing memes from 2011. I know some of you do, and we are equal opportunity here.

One thing that you can't compare to last year is the fact that Dallas' defense didn't fold when the offense put it in a difficult position. After a delay of game moved Dallas from 3rd and short to 3rd and 8, QB Tony Romo forced a throw over the middle that was intercepted and returned to the goal line.

Does anyone doubt that last year it would've been an easy seven for virtually any opponent? Not this year. The Mothership's Bryan Broaddus breaks down the defenses goal line stand, down by down.

At the snap of the ball, Josh Brent explodes up the field and pushes center David Baas into the backfield. Marcus Spears with the same charge is able to get rid of guard Chris Snee. At the point of attack coming right, Bennett cannot handle Coleman who sheds his block, Anthony Spencer extends on Pascoe then fight hard to his left as the ball comes to his side. From the inside Sean Lee and Bruce Carter are running hard to the edge. Sensabaugh and Spencer are there as Bradshaw is unable to turn his shoulders up the field and the play loses two yards.

Good stuff as always from Broaddus. Of course, that's just one snapshot of the game that we love. What about the contest in it's entirety?

We turn to the gents of Pro Football Focus for our first look, while they get "Refocused."

Refocused Is their look at some major, hidden themes from each game and for me is a must read. Reason being, it goes beyond just the numerical game grades they hand out and give insight into the context of what they are grading on.

For instance, if you were to add up the overall grades of the two team's cornerback groups, one could easily dismiss PFF as being full of it. There's not a chance in hell that New York's coverage was even in the same range as Dallas', much less better than. However, when you add the safeties into the equation, and only focus on the Pass Coverage grades, you see that PFF graded very similar to the eye test.

This clearly shows that the Cowboys secondary played a superior game than the Giants; but they were not without fault. Here's what they had to say about our brand new secondary.

There can be little doubt the weakness of the Dallas defense in 2011 was the play of their cornerbacks. So, it was important to see how the new faces would fare against a particularly stern challenge from the Giants’ passing game. In short it was a mixed bag, but still enough to suggest that there will be improvement in the season to come. While neither starter made a collection of plays to grab your attention (just one pass defensed between them), they did make extensive use of press coverage to disrupt the Giants’ receivers at the line of scrimmage. It was unmissable just how much press coverage the Cowboys were playing, with Brandon Carr (50% of all passing plays in press coverage) and Morris Claiborne (78%) doing their utmost to stop the Giants getting out into their routes quickly. Their performance and use of press coverage was by no means perfect and Carr struggled when receivers crossed at the line of scrimmage, a tactic the Cowboys were vulnerable to last season as well. This tactic accounted for a 26 yard completion to Victor Cruz and but for an errant pass by Eli Manning would have accounted for long touchdown completion to Domenik Hixon as well. Cowboys fans will also hope that Claiborne’s struggles in run defense don’t persist after he was shrugged off by Ahmad Bradshaw on his way to the endzone. Signs of improvement from the Dallas cornerback corps, but at the same time plenty still to work on.

The press coverage angle is one we've discussed since we first heard of Rob Ryan's plans for 2012 and the incorporation in game one is awesome. This does confirm that there is still work to be done however.

And then there's Football Outsiders, checking in with "Audibles", their running diary of conversation while the game is going on. O.C.C. pointed this out to particular exchange about our new third receiver, Kevin Ogletree:

Rivers McCown: So, I see we have found this year's Laurent Robinson.

Danny Tuccitto: On the second Ogletree touchdown, Romo threw another one of those accurate, outside-the-numbers, split-the-corner-and-safety passes Tom was talking about earlier.

Mike Kurtz: It also helped that Ogletree was wide the hell open on that play.

Aaron Schatz: I don't think Ogletree really did much there. Romo made that play, first with the Audible and second with whatever he did to distract Corey Webster, which had him looking in the backfield and ignoring Ogletree. Ogletree didn't really "beat him" with the double move, Webster wasn't even really trying to keep up with him.

My favorite snippet from the read, though, has to be...

Real MVP of the half, though, goes to the Cowboys' front seven, which is getting tons of pressure and cutting off anything resembling a run. Sean Lee is making tackles sideline to sideline. DeMarcus Ware is listed with two sacks, two tackles for loss, and two quarterback hits. And a lot of credit goes to Rob Ryan, who is lining up his DL all over the place and giving the Giants a new look on almost every snap.

That's exactly what Bob Sturm of Fox Sports Southwest does in the return of his series "Decoding Garrett". There is literally a smorgasboard of information, as Sturm explains some of the basics for newcomers to the series. He then breaks down run/pass distrubtion(23-31 for the game) and distance to go for each down, as well as play calls they started drives with and plays run out of various personnel groupings.

It really is a fantastic read to look back on how the game was handled by Garrett. In addition, he's even added snazzy graphics of Romo's pass distributions by half. 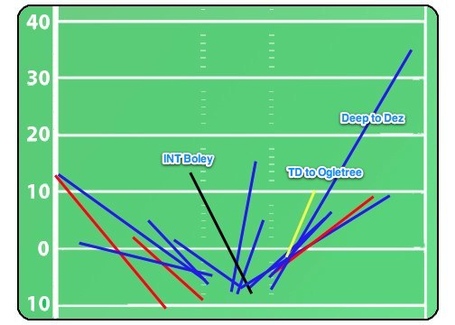 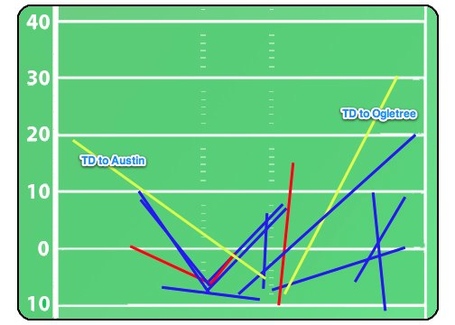 I'll save the graphic that highlights the slants thrown to Kevin Ogletree for when you click the link. To wrap up, here was Sturm's closing:

Overall, a lot to like. A very efficient night with mistakes, but a show of force that demonstrates the Cowboys have plenty of offensive potential. For once, they attacked in road game in a hostile environment and that is a promising attribute. They were balanced and on schedule for much of the night. They protected pretty well and ran the ball well even when declaring run.

Optimism is everywhere after Game 1. Let's see how it holds up in Week 2.

Still plenty more to catch up on, so here's a rundown of some things to keep you connected going into the weekend.

Hat Tip To Archie, Tarheel Paul.. and heck, me.

For those wondering about Ryan Cook usurping Costa, it looks like it might not be a fair fight.

In football as it is in life.

Jerry Jones wants to think of Seattle as Game 1 | Ft. Worth Star Telegram

I can dig it; start from scratch. Let's have 16 restarts after huge victories. Sign me up.

Clinton vs Cowboys: Who Won The Ratings War? | Star Telegram

I know who won the battle in North Texas, and as the article points out... the Cowboys were only on one station.

Welp. I wonder the cutoff age for them to consider Lil' KD as a +1?