With the emphasis placed on fourth quarter performance by today's sports media, one would think that the first 45 minutes of play are essentially meaningless.

Of course, such a narrative is nonsense. The Cowboys beat the Giants on Wednesday night, and it didn't take place over the course of only 15 minutes. It was a full 60 minutes of "we're the better team." In fact, many of the themes that eventually led to a Dallas victory presented themselves in the first quarter of play.

For that reason, I present to you a collection of before-and-after freeze frames highlighting the Cowboys' early-game effectiveness. The first quarter ended 0-0, but the Cowboys were already well on their way to victory.

After the jump, some All-22 enhanced Freeze Frames!

We'll start things off with the Giants' second offensive play of the game - a quick throw to Victor Cruz that nets the Giants 5 yards on second and ten. 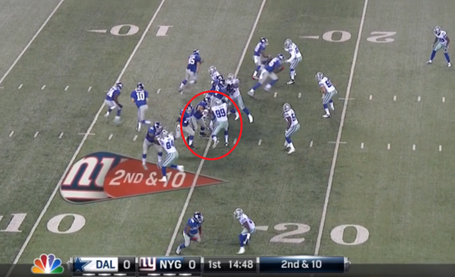 The highlighted man is Kenyon Coleman, matching up with the Giants' center David Baas, an 8th-year veteran formerly of the 49ers. Coleman is punching Baas' shoulder to set up his swim move. 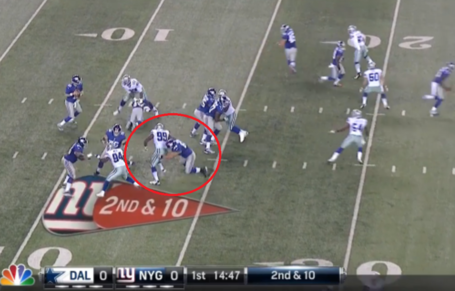 The swim is effective, leaving Baas hugging Coleman from behind and eventually being dragged down on the play while preventing Coleman (illegally) from getting pressure on the quarterback. Coleman again shows why he was in no danger on cut day, as he showcases his well-known strength along with some surprisingly fluid pass-rush moves. 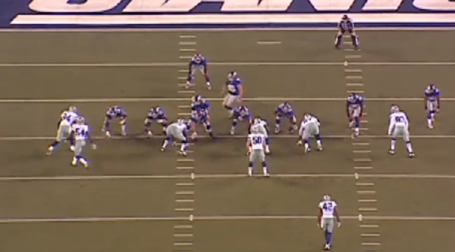 Using the same play, this time from the All-22 film, we can take a look at how significant the quality upgrade to the defensive line truly is. The Cowboys' four rushers are DeMarcus Ware (on the edge), Kenyon Coleman (lined up in the 1-tech), Josh Brent (3-tech) and Jason Hatcher (5-tech).

The Giants keep Ahmad Bradshaw in to block, giving a 6-man protection the task of stopping 4 Cowboys' rushers.

The 6 blockers are unable to provide any significant protection to Eli from our 4-man rush. With Brent and Coleman double-teamed, Ware and Hatcher are left blocked one-on-one - Hatcher by Bradshaw alone. Hatcher gets the pressure that forces the throw, while Coleman and Ware were both closing quickly. Brent was steadily pushing the pocket.

What's so impressive about our rush, if there isn't a sack as a direct result? The math is simple. 6 men staying to protect leaves only 4 eligible receivers. Those 4 receivers are being covered by the 7 men on our defense who aren't rushing the passer. This, combined with the observation that they're still managing to generate push and pressure when sending 4 men at a 6-man blocking scheme, leads me to some very strong optimism regarding their future potential.

This heavily shifted alignment may have been used to compensate for Coleman and Brent's lack of speed (when compared to Ratliff and Hatcher), by pushing them both to the strong side of the play. In theory, they will already be where the play is likely going and will then be able to pursue to the ball faster than if they were in their standard alignments (5- 0- 5-techniques, for example).

On our next play, we see the same defensive front as before. This play was the first of the NYG's second drive, a run to the strong side. This time, however, the Giants have Martellus Bennett in to block, as well as Henry Hynoski. 7 blockers, 7 defenders - let's see what we've got.

At this point, all of the matchups have been set. Their right tackle is on Ware, right guard on Coleman (who was initially doubled), center on Carter, left guard on Brent, left tackle on Hatcher, and tight end on Spencer. This leaves Hynoski and Sean Lee. Will Hynoski deliver a punishing blow and open the way for Bradshaw?

No. The lauded UDFA fullback dives at Lee's ankles, causing him to bear crawl briefly before reclaiming his feet - all the while remaining in position to make the play. Why the attention to the fullback play? After Dallas drafted Shaun Chapas in the 7th round of the 2011 draft, many were dismayed that Hynoski was not the selection. He was held up as an immediate starter and difference maker - not to mention a rhinoceros (the "Hynoceros," if I recall correctly).

Plays like these lead me to believe that Vickers, certainly, and likely Fiammetta, are (or were) better players. Over the course of 10 run-blocking plays, Hynoski amassed a -0.5 run block rating from PFF. Don't believe the hype.

Hynoski's ineffectiveness, along with the entire offensive line, gave the Giants' running game a considerable limp. Our ability to contain it was key to maintaining our excellent coverage throughout the game. 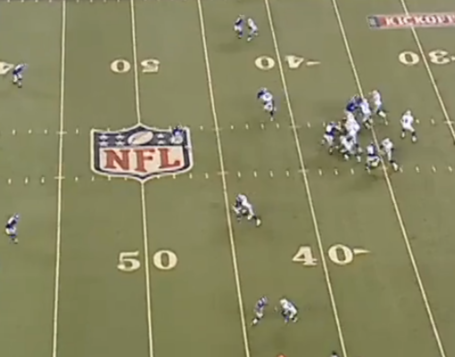 On this next play, the Cowboys send 4 receivers out on patterns, keeping the RB in to block. The Giants are playing man all across with two deep safeties. On the initial release, all four receivers appear to be tightly covered by the Giants' defenders. 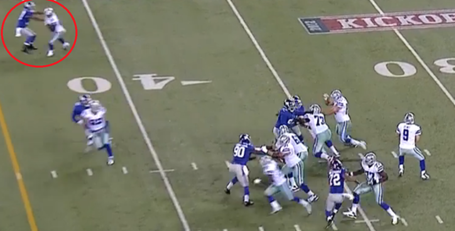 Ogletree, however, who was at the top of the previous screenshot, is showing off his new-found physicality. We all know that contact between the defender and receiver is allowed within 5 yards of the line of scrimmage. Usually, this applies to corners jamming wide receivers, who attempt to swat the corners' arms away and get into their routes. Not Ogletree.

Here, he looks like a defensive lineman as he gives the Giants' corner, Coe, a hard slap to the shoulder, knocking him off balance as Ogletree makes his cut. 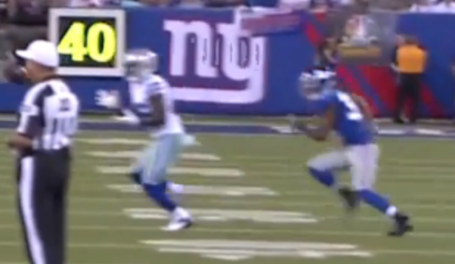 The resultant separation was a key component to the Cowboys' victory Wednesday night. We can pretend that Ogletree's success is simply a result of playing with Tony Romo, and from a preparation standpoint that may be true. On this play, however, even Blaine Gabbert (who still can't seem to connect with Laurent Robinson) could have completed the pass.

Apart from these three plays, there were numerous other occasions where the Cowboys had success. Sean Lee's forced fumble, along with the team run defense in general, was excellent, but difficult to highlight. The team was finishing plays, hustling to the ball on defense and sustaining blocks on offense. These are the things that win football games, and they don't exist exclusively in the fourth quarter.