During the 2011 season, we saw a wide receiver named Laurent Robinson basically come out of nowhere and lead the Dallas Cowboys with 11 touchdown passes. Robinson managed to become a big-time playmaker for the team in 2011, but the Cowboys just couldn't afford to bring him back in free agency.

The Cowboys did retain the services of young wide receiver Kevin Ogletree. Even though he was young, the team valued his experience and athleticism. No matter what, the Cowboys were willing to give Ogletree one more shot to become the receiver that they thought he could become.

I was a big time supporter of addressing the issue in the draft or free agency, but right now I am glad we stayed put. Could you really blame me for not believing in Kevin Ogletree? I loved him during his rookie season, but since then he showed little development and never grew into a legitimate NFL wide receiver. Even though it was only one game, the perception of Ogletree has changed. He put together a brilliant performance and scored his first career regular season touchdowns.

After just one game, some are expecting Ogletree to become the next Laurent Robinson. I think we can place him into that category because Ogeltree has always possessed great speed, but he wasn't a great route runner. Now that he has improved as a route runner, we could see Ogletree have a breakout season in 2012.

Take the jump for more...

The Cowboys operate out of the shotgun formation with three wide receivers and tight end Jason Witten lined up in the slot.

Ogletree is lined up to the outside where he is matched up against cornerback Michael Coe. This was a mismatch that the Cowboys wanted to exploit during the game. 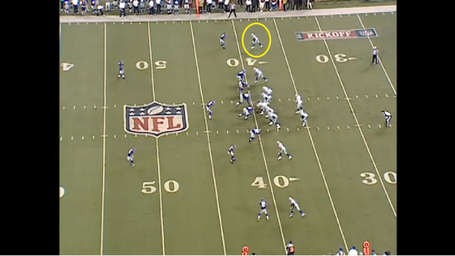 After reviewing the game, I noticed that the Giants played their safeties deep over the top in order to prevent the big play, but we will get to that later in this post. 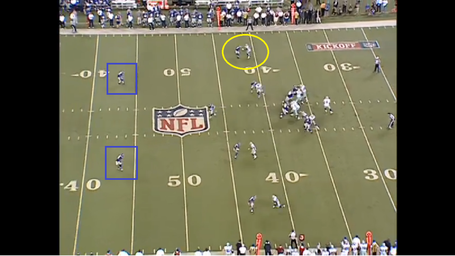 The All-22 shot from the end zone shows that Romo didn't drop back too far and got the ball out of his hands very quickly. The offensive line also did a great job in protecting Romo here. Romo never faces and real pressure, and that allows him to hit Ogletree in stride. 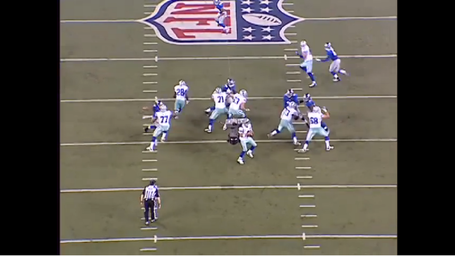 Ogletree makes a subtle move towards the sideline, which tricks Coe into thinking the route is going to the outside, but Ogletree then makes a quick slant back towards the inside. Ogletree gains enough separation from Coe to pick up the first down easily. 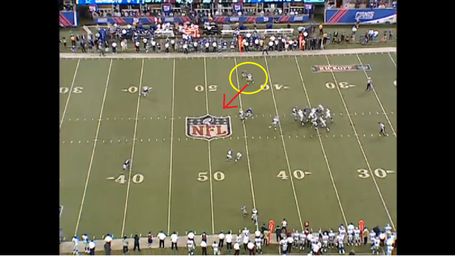 Once again they come out with a 3 WR set in the shotgun, with Witten split out wide in the slot.

Ogletree receives the same match up with Michael Coe again, but this time they are on the other side of the field. The route is very similar to the last one, Ogletree motions towards the sideline, but then cuts back inside on a slant route. 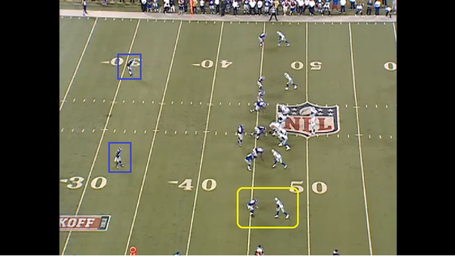 Ryan Cook did a pretty good job in this game, but he did have some negative plays when he first entered the game. His snap here is way too far to the right of Romo. Fortunately for the Cowboys, Romo makes a great grab on a poorly snapped ball. 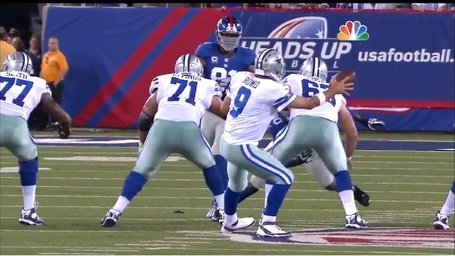 In my opinion, the refs gave Ogletree and the Cowboys a bad spot here. He is clearly past the yellow marker, which is unofficial, but it looked like to me that Ogletree did indeed pick up the first down with his second effort. Maybe his knee was down before he extended his body over the first down marker, but the effort was outstanding from Ogletree on this play.

Romo was clearly comfortable with targeting Ogletree throughout the entire game. With Ogletree securing his catches and fighting for extra yardage, that probably made it easier for Romo to trust him. 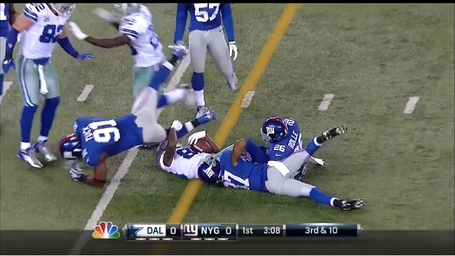 On Ogletree's first regular season NFL touchdown, he made a play that was reminiscent of Patrick Crayton and Laurent Robinson extending their routes according to what Tony Romo did while he was scrambling.

Romo motions running back DeMarco Murray out wide, which opens up the field. Ogletree is in the slot and will run a very simple pattern here. He will cut up field, turn quickly inside and finally he will turn around in the middle of the field and face Romo. 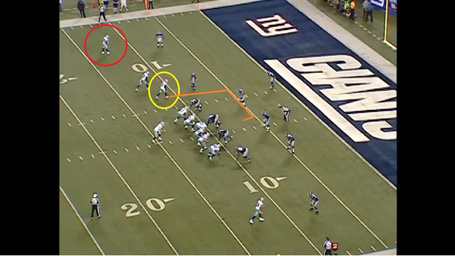 Jason Pierre-Paul was a problem all night long for Tyron Smith. Smith didn't have a good game, but there were times where Smith stonewalled Pierre-Paul and the other Giants' defensive ends. But on this play, JPP drives Smith back into the backfield and Romo has to adjust accordingly.

Romo feels the pressure with the eyes in the back of his head and begins to scramble outside of the pocket. Ogletree is being covered by Chase Blackburn and Jacquian Williams at around the five yard line. 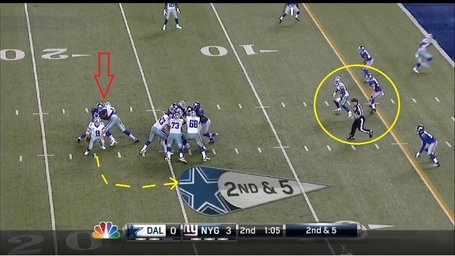 Now JPP has beaten Smith and makes a diving attempt to take out Romo by the legs, but the mobile Romo is already starting to run away from him. Ogletree notices that the end zone is wide open, so he begins to split the two linebackers attempting to cover him.

If you are going to be a wide receiver in Dallas, then you need to extend and alter your route when Tony Romo gets outside of the pocket. Ogletree make the perfect read here and starts to head up field. 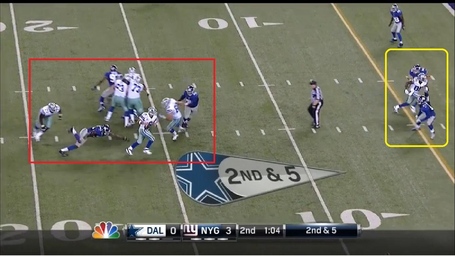 The linebackers are still looking back at Romo while Ogletree sneaks right past them. I don't know if there was a blown coverage or assignment here, but these type of mistakes happen when Romo scrambles and makes plays with his legs. 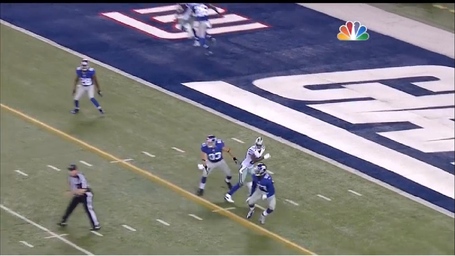 Ogletree is now wide open in the end zone. Romo makes a fantastic throw here as he perfectly places some touch on the football and drops it right over the jumping linebacker. 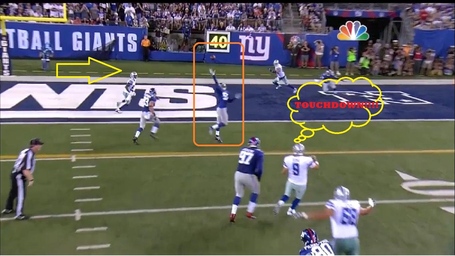 Ogletree makes the routine catch in the end zone as the Giants' defense watches on. If Ogletree can continue to adjust on the fly, then we will see him make a lot of big plays for the Cowboys in 2012. This is the type of play that tells me Ogletree does indeed have football IQ. 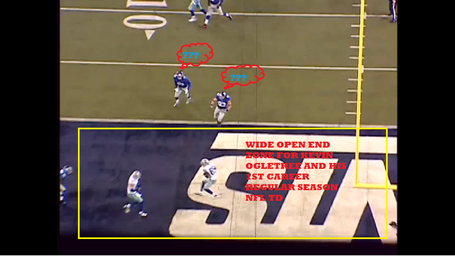 The Giants are once again playing man to man coverage on the outside with two safeties playing deep. Ogletree is matched up with the best cornerback on the Giants, Corey Webster. This play was very similar to the Dez Bryant touchdown in the first meeting from last year. 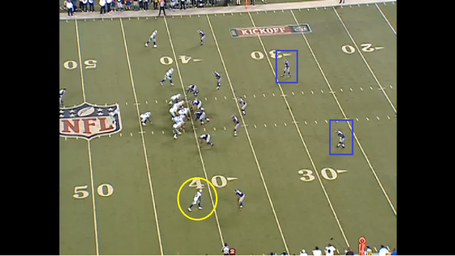 At the line of scrimmage, Romo yells out his patented kill call, meaning he is switching the play from a run to a pass in this case. This is the beauty of calling two plays in the huddle. Romo has become one of the best in the NFL at reading what the defense is doing before the snap. 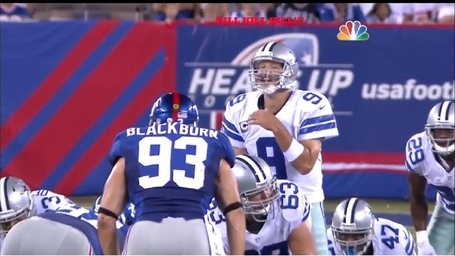 Ogletree runs what I call a stop and go. It's another double move that when run properly, confuses the cornerback and leaves him out of position to make the play deep.

Ogletree fakes like he is running a comeback route, but he is actually deceiving the cornerback by stopping and going deep. Once Webster has jumped on the comeback route, this allows Ogletree to go up top and run right by him on the go route. 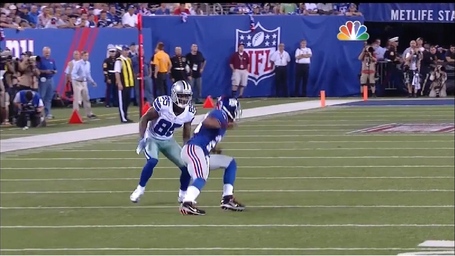 Jason Witten was the perfect decoy on this play. Safety Kenny Phillips must make a decision here, and he gets caught out of position just for a split second he comes up on Jason Witten.

This leaves Phillips too far out of position to help out Webster deep. Phillips attempts to get back over and prevent Ogletree from reaching the end zone, but he is too late. Ogletree is already beyond Webster and has too much room. With his speed, this should be an easy six points for the Dallas Cowboys. 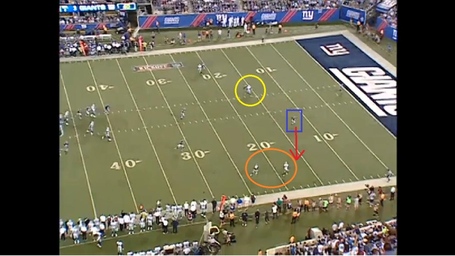 Romo has to step up out of the pocket because Doug Free was beaten by Osi Umenyiora. Osi was never really too much of a threat here because Ogletree was so wide open that Romo just had to get the ball out in order to avoid the sack.

Regardless, Romo makes a perfect throw and drops it right into the perfect spot. 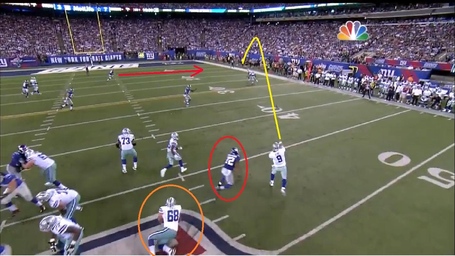 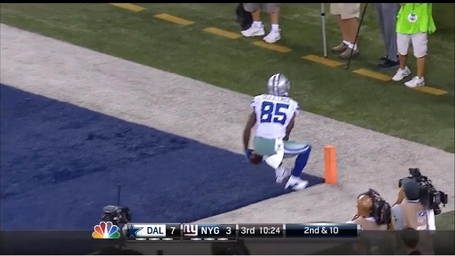 The two touchdowns that Ogletree had were huge, but perhaps his biggest play of the night came when the Cowboys needed him most.

The Cowboys are one play away from putting this game away. Last year against the Giants, the Cowboys couldn't seal a win at home because they failed to convert one play. Once again, we would see if the Cowboys could deliver in crunch time.

Ogletree is now lined up against one of the worst cornerbacks that played in this game, Justin Tryon. With Michael Coe suffering a "tweaked" hamstring, Tryon was picked on by Tony Romo and company whenever he was in the game. 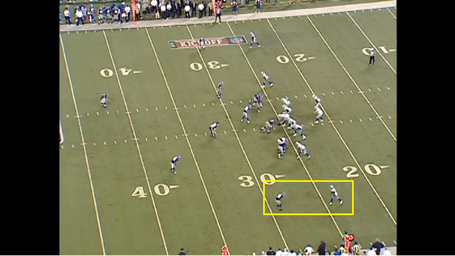 Tryon is playing too far off the line of scrimmage and never gets any jam on Ogletree. Since Ogletree is running another slant, the separation allows Ogletree to easily cut back inside. 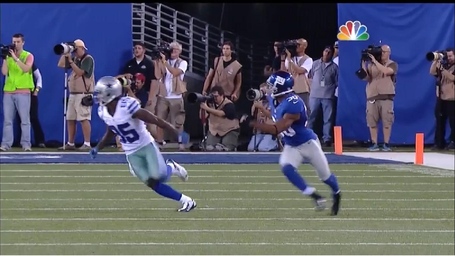 The offensive line does a really good job of blocking up front, but a pass rusher does come through unblocked on the outside. It doesn't matter because Romo has a wide open Ogletree streaking towards the first down marker. Romo releases the ball quickly into a clean throwing lane. 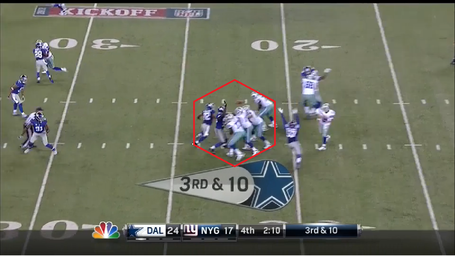 At first I didn't know if Ogletree was going to pick up the first down. He made the catch a few yards behind the first down marker, and there were a few Giants in the area there to make the tackle. 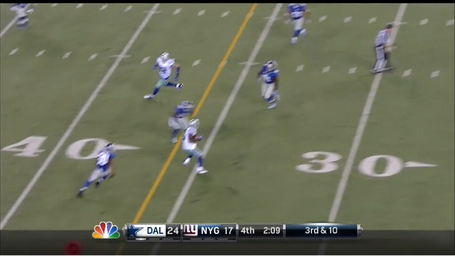 Ogletree makes a beautiful spin move and avoids a tackle, by the time the second Giant closes in to make the tackle, it's too late. Ogletree has picked up the first down and won the game for his team. This may seem like something simple, but this was great execution by the quarterback, offensive line and wide receiver. 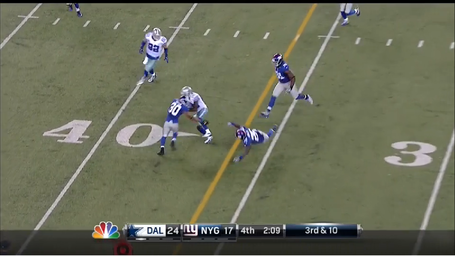 Last year, the Cowboys simply did not make these plays when they desperately needed them. Picking up first downs and taking advantage of the mismatches will increase your chances of winning the game. The Cowboys managed to do a great job of succeeding in those areas against the Giants.

Kevin Ogletree had the game of his life on Wednesday night. He has the athletic ability to do that on a regular basis, but he must continue to work hard at perfecting his route running. If he runs routes like this for the rest of the season, then he will pick up right where Laurent Robinson left off.