A Look At Tony Romo On The Move

Share All sharing options for: A Look At Tony Romo On The Move

The players and coaches of the Dallas Cowboys only got a day to relish the stunning (to everyone but us here at BTB, apparently) 24-17 win over the New York Giants. They are already focusing on the next game, against the Seattle Seahawks. We, as fans, are not so restricted. We can savor this for the entire ten days before that game if we choose.

And that means some time to review what happened. As is well known around here, the Cowboys had some major issues with the offensive line. I was curious about how they managed to overcome the lack of continuity and practice time for the big'uns leading up to the start of the regular season. I thought, from my initial watching of the game, that I saw one factor that contributed a lot to that. I went back and looked up a few plays that stuck in my head, and not only confirmed my recollection, but left me even more impressed upon further review.

Simply put, Tony Romo was amazing in how he moved around to escape the pass rush and buy time. There is no question that he makes the line look better than it is, and he does it so consistently, with such a sense of the pressure coming in, that you have to wonder just how he does it. Further, he does not just elude the rush, but he is able to find his receivers and get the ball downfield. Some quarterbacks use their legs to make yards on the ground. Romo uses his legs to keep his arm in the game.

This does not only mean that he completes passes sometimes when all but a very few NFL quarterbacks would be forced to throw it away, or would go down to a sack. Cris Collinsworth noted in the second half that the Giants defenders were starting to look worn down, and having to chase Tony around likely played a pretty big part in that.

I pulled up three very good examples to illustrate what I mean. Take the jump to take a look.

The first play did not end in a completion, but showed how Romo also avoids the big loss. At the 3:22 mark of the first quarter, the Cowboys have a 2nd and 10 at the Giants' 46. Linebacker Keith Rivers comes on a blitz, and is untouched. 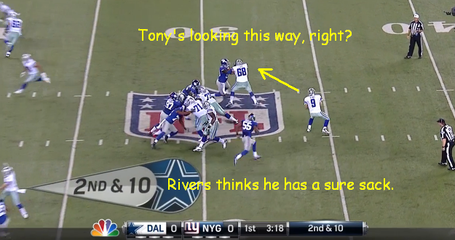 He has Tony dead in his sights. 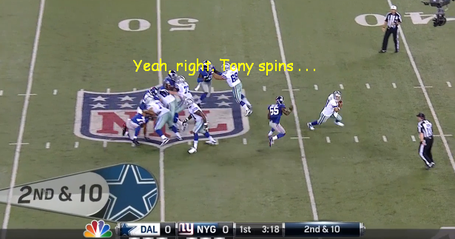 But somehow, Romo not only senses the pressure, but times a spin move perfectly to his right. 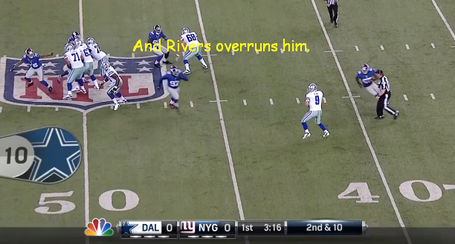 Rivers overruns the play. Tony does not complete the pass, but there is no sack to kill the drive.

The next play is one that has been replayed a lot. Trailing 3-0 with 1:07 to go in the first half, the Cowboys have driven to the New York 10, and have a second and five. Tony drops, and Jason Pierre-Paul, who almost everyone will tell you is the best pass rusher in the league (well, at least those same guys who all picked the Giants to win will tell you that) is coming after him. 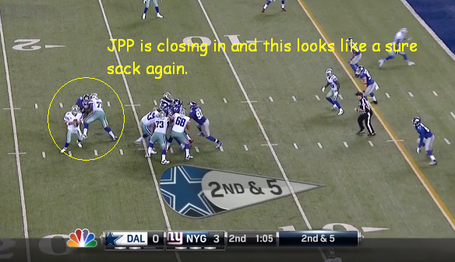 JPP is pushing Tyron Smith back and is just about to lower the boom on poor Romo, who has his back to the danger. Again. 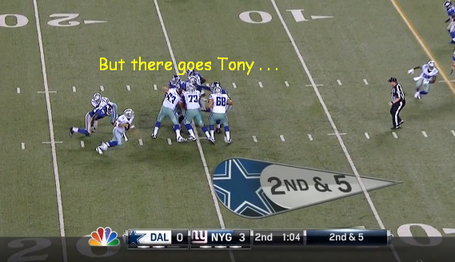 And again, with uncanny presence of mind, Romo moves away from the danger - and notice that as he is dodging the near-sack, his eyes are downfield on the player who is about to become his new BFF. 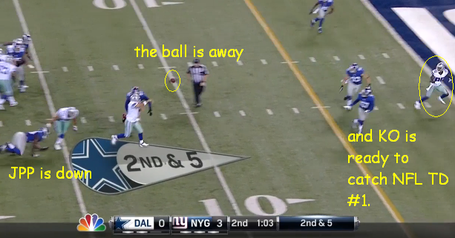 He runs towards the line, but it is all decoy. While everyone is watching him, Kevin Ogletree is watching the ball all the way into his hands. The Cowboys go up 7-3, and never look back.

This last play was not as spectacular, just a 10 yard completion. But Romo's play was again a thing of beauty.

It's first and 15 after one of the seemingly endless penalties. 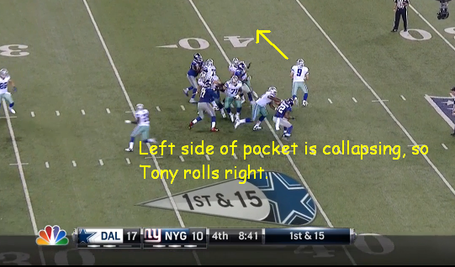 The left side of the pocket starts to collapse. Note that the line does give Tony a place to go by keeping the rush to his left, freeing the right side up. He heads that way. 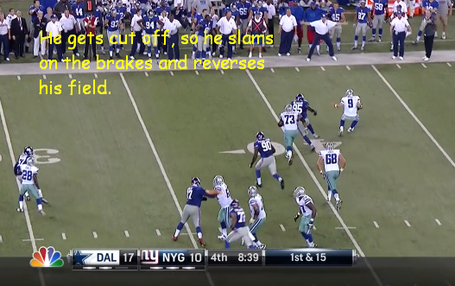 Tony can't find a target right away, and Rocky Bernard is closing in, with JPP trailing. Tony slams on the brakes and does a quick move to step back, again creating space for himself. 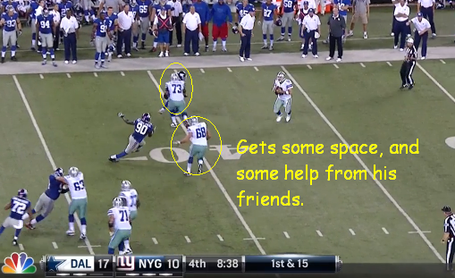 By buying time, Tony also gives Mackenzy Bernadeau and Doug Free a chance to get involved. 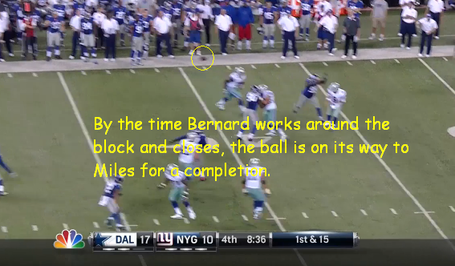 Free ties JPP up, and by the time Bernard can get loose from Bernie, the ball is gone, the pass is complete, and the drive that would lead to the Miles Austin touchdown stays alive.

The win was certainly a team effort, but it is also blatantly evident that some contributions were more significant than others. Tony Romo was exceptional in this game, and his 129.5 quarterback rating only tells part of the story. There are few quarterbacks in the NFL that could have evaded those sacks, and fewer that could have then found a target downfield. The Cowboys have not had one this good at doing it since Roger Staubach, who was also known as Roger the Dodger.

Romo has one thing in common with virtually all of his teammates: He is a man with a mission. As Jason Garrett will continually remind the players, that was just one of sixteen games. It was the beginning, not the goal. But based on the performance he had, Tony Romo is poised to have a remarkable year. If he stays healthy, and if the team can show that continuous improvement the head coach demands of them, it may well be a year we will remember for a long time.

Enjoy this for a few more days. The next test is coming.