The Stats Driving Cowboys' Coaching Decisions: Why Ryan And Peete Are Gone - And Who Could Be Next

You don't need fancy pants statistics to understand the Cowboys' coaching decisions of the last few days. A look at a couple of the most basic stats easily tells the entire story of why Rob Ryan and Skipe Peete are gone - and why more assistant coaches could follow.

Share All sharing options for: The Stats Driving Cowboys' Coaching Decisions: Why Ryan And Peete Are Gone - And Who Could Be Next

For years, we have been fighting the good fight here on BTB, advocating advanced metrics and efficiency stats like ANY/A, passer rating differential, DVOA, EPV, NY/A, drive success rate and many, many others over volume stats like yards, points or sacks.

We know that advanced analytics are getting a lot of traction with NFL teams. Former Cowboys Senior Vice President and General Counsel Alec Scheiner was recently hired by the Browns as their President in part because he was responsible for the Cowboys' analytics department. In addition to the Cowboys and now probably the Browns, there are many more teams heavily involved in in-depth statistical analysis and research, including (but not limited to) the Packers, Patriots, Bucs, Eagles, 49ers, Bears, Falcons, Ravens, Lions, Bills and Jaguars. In a season-ending news conference, Bears general manager Phil Emery cited extensive use of numbers from STATS and profootballfocus.com in player evaluations.

But despite those efforts, many decisions in the NFL are still being made based on the same data that was used 50 years ago. Every week, the NFL produces a stat sheet that shows how teams are ranked across the league in 17 different categories. Here's an excerpt from that stat table: 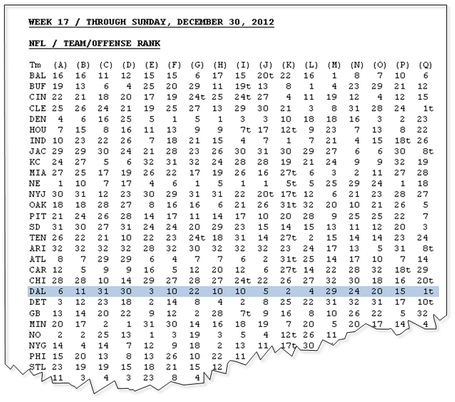 I know that the Cowboys use much more sophisticated analysis tools than the ranking table above, but let's assume for the purposes of this post that the Cowboys based their season-ending evaluations of their coaching staff on this table (or a very similar version). Let's further assume that a ranking between 1-10 is considered good, a ranking between 11-20 is average and a ranking below that is bad. This is what their evaluation would have looked like for offense, defense and special teams:

So using this collection of stats, let's try to understand what happened over the last few days with the coaching decisions:

Over the course of the next weeks and months we'll be reviewing the 2012 season in more detail and with more advanced metrics. But to understand the Cowboys' coaching decisions, you don't need to look at fancy stats. A look at a couple of your grandfather's stats easily tells the entire story.