Cowboys Defensive Coaching Change: How Will The Players Fit Into A 4-3?

The Dallas Cowboys have been in a 3-4 base defense since 2005. There is some legitimate consternation regarding the capabilities of individual players to make this switch. It's not as crazy as it looks, however, and it looks more and more like the Cowboys are in good shape to make this move. We go from 4/4 quality linebackers and 2/3 quality linemen to 2/3 quality linebackers and 4/4 quality linemen (no net loss). Let's take a closer look at the transition, and how much, if any, the players' roles will change.

Share All sharing options for: Cowboys Defensive Coaching Change: How Will The Players Fit Into A 4-3?

Tom recently gave good cause to discontinue the hand-wringing over the significance of the Monte Kiffin hire - at least from the whodunit standpoint. He leaves us free, however, to fret over whether or not our current players will fit successfully into a Tampa 2 scheme.

I'm not so worried. Call it optimism, if you like, but I don't think players can do anything but improve when leaving a scheme as confusing as Rob Ryan's in favor of one of the cornerstones of strategic simplicity in the Tampa 2.

That theory is simple. If someone performs well in a very distracting environment, they should perform at least as well (and likely better) in an environment with those distractions removed, so long as their responsibilities remain relatively unchanged.

That last qualifier is essentially the key. There is rightly concern regarding the prospect of teaching the entire defense 11 new positions. I argue, however, that for many their jobs will change negligibly. Some players won't change positions at all.

First, a presumptive starting lineup, base alignment, and scheme: 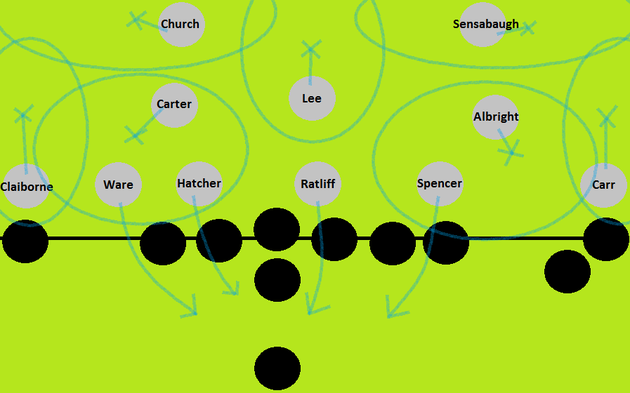 The arrows represent pass rushing, the x's correspond to the middles of zone coverages. The circles represent rough approximations of those zones.

When you compare this to the Cowboys' 3-4 alignment, you can see that most of the players are in the same places. In fact, the biggest difference seems to be replacing Kenyon Coleman with Alex Albright; more accurately, Coleman would take Spencer's spot, Spencer Albright's, and Albright would take Coleman's spot on the sideline. Despite having 'fewer linebackers,' this alignment seems much more favorable in coverage than the Cowboys' old 3-4.

Now, we can run through each individual player's responsibilities and compare them to how they used to be utilized.

I can't say that everything will go as smooth as I hope, and I believe retaining Spencer is a big part of that 'smoothness.' The ability of Spencer to consistently play that exact position very well throughout his career has been a highlight of this Cowboys' defense for quite some time.

He's successfully played the DE/OLB hybrid role in Nickel situations, and should have no problem assuming those responsibilities in the base scheme. If you let him walk, you're putting a question mark in his place. The SLB is already a question mark, so we would be inviting teams to run Power O's off right tackle all game.

If we keep Spencer, though, our defense looks solid to start. We have a couple of unspectacular players in Albright and Church, but if they're kept on opposite sides of the field they shouldn't combine into any major liability. The potential for improvement is there, but the need for improvement won't be nearly as pressing. For those of us looking for Offensive Line improvements, that may be just what the doctor ordered.