Can DeMarcus Ware Play With His Hand On The Ground?

The new Cowboys defense will turn DeMarcus Ware from a 3-4 Outside Linebacker into a hand-in-the-dirt 4-3 Defensive End for the first time in his NFL career. Is that a cause for concern?

Share All sharing options for: Can DeMarcus Ware Play With His Hand On The Ground?

With the Cowboys moving to a 4-3 based defense, DeMarcus Ware will transition from 3-4 Outside Linebacker to 4-3 Defensive End. That upcoming move has led to many observers weighing in on whether Ware can actually play the position - which will require him to play with his hand on the ground.

On of the most recent voices to weigh in on the issue is respected Dallas Morning News columnist Rick Gosselin, who is quoted as follows:

"I saw this in Kansas City in 1993. Derrick Thomas was a Hall of Fame bound pass rusher. He was a dynamic pass rusher. He was a double digit sack guy. They went to a 4-3. They told Derrick put your hand on the ground. He went from 14 and a half sacks to eight. He was a third less player than he was as a stand-up 3-4 speed backer, which is what Ware is, and Derrick Thomas was 26 when he made the move. DeMarcus Ware is 32."

A couple of things struck me as odd with that statement. For one thing, Ware is 30. And with a birthday at the end of July, he'll turn 31 at the start of training camp this year. He'll only turn 32 in 2014.

Another thing that struck me was not only has Ware played four years of college ball as a defensive end, but he's also intermittently lined up with his hand on the ground for the Cowboys over the years. Here's a picture from the 2011 season: 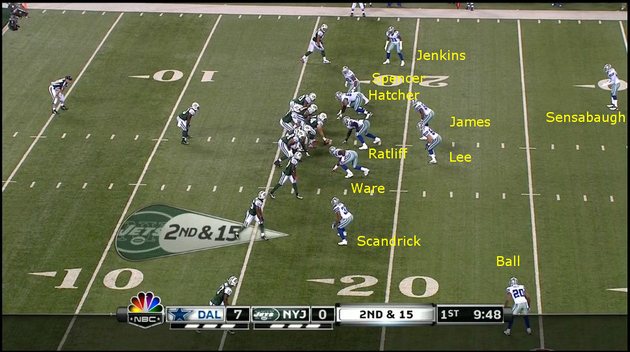 On this play (Ware had sacked Sanchez on the previous play) Ware lines up at left end with his hand in the ground. The Cowboys are in a nickel package with three down lineman and three linebackers. They send four guys to rush, with Bradie James blitzing from the linebacker position. Ware abuses right tackle Wayne Hunter and bull rushes him all the way into Sanchez's drop, but Sanchez manages to get rid of the ball in the nick of time.

Finally, the thing the bugged me the most about Gosselin's quote is that he goes all the way back to 1993 to make a point. Why not choose a more recent example?

Another recent team to move from the 3-4 back to the 4-3 were the Patriots, who made the move between the 2010 and 2011 seasons. The Patriots didn't transition their OLBs to DE, opting instead to bring in two new players to play DE. One of those, Andre Carter, had spent the previous season playing OLB for the Washington Redskins. In 2010 the Redskins were running a 3-4 defense, and OLB Carter recorded a mere 2.5 sacks. A year later, at the age of 31, he recorded 10 sacks for the Patriots as a DE.

I guess the point here is that nobody knows how the transition will go for Ware - and for any other player on the Cowboys defense for that matter. And while there is evidence from 1993 that such a move doesn't always go well, there is also evidence that such a move can go very well. You just have to want to look for it, that's all.

Over to you: Is DeMarcus Ware as a hand-in-the-dirt 4-3 Defensive End a cause for concern?