Tony Romo's Last Interception: As Bad As We Thought?

Where did you think this team was going, when we sat at 3-5? If, at that point, we offered you 8-8, would you have taken it? A lot of us would have. The team was flawed, and it continued to fall apart (through injuries, not chemistry issues). The Cowboys didn't disappoint me on Sunday, they just stopped amazing me. For most of us, it all ended on one play.

Share All sharing options for: Tony Romo's Last Interception: As Bad As We Thought?

I'm defending the 'indefensible.' And why not? Since when is public perception of a well-known play canonized and immune to criticism? Never.

But my biggest question is this: How bad would things be if Tony Romo made a perfectly reasonable football play? And yet, it seems so important to uphold this play as an egregious error.

Obviously, this needs further investigating. Bryan Broaddus, over at the mothership, already gave a textual review of the play here. I offer you my own, as well. 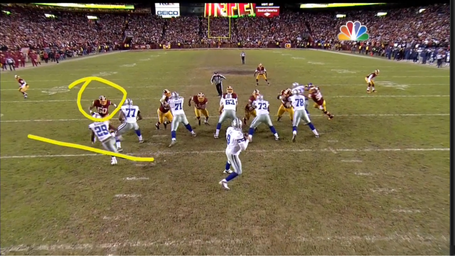 There are ten Redskins in the picture. The eleventh is off the screen, to the right.

Jason Garrett said that the plan was to get Murray to release to the weak side and up the field. Romo tells Murray what he sees and appears to give a signal to Ogletree to take Josh Wilson up the field on the "9" route to clear.

At the snap, Romo sees a 6-man rush, with a free rusher up the middle. Both safeties are giving help to the right side, and the corner on our right is following our receiver up the sideline. One Redskins linebacker is running with Witten on the right side of the formation.

On Murray’s side Rob Jackson starts up the field like he is going to rush but peels outside with Murray. Jackson does such a nice job on the blitz it gets Parnell to kick outside to pick him up on the block but Parnell ends up blocking air, Livings picks up Stephen Bowen in the "B" gap but no one gets Riley.

Romo struggles when pressured straight up the middle - we all know this. Yet our line struggles to employ an inside-out blocking scheme. Perhaps the line didn't get the hot route call to Murray, and believed he would be picking up the free man inside. Either way, the free man should be our circled man here, with Smith and Livings both shifting right one man.

If that was the case, Romo would have been staring at the free rusher, and noticed that he was retreating into coverage. This doesn't happen, though. 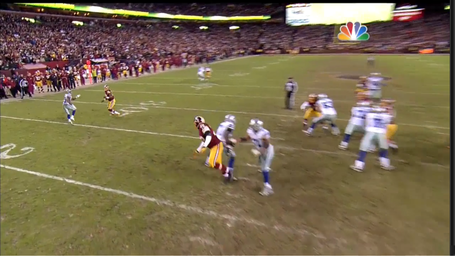 Romo throws a floater, expecting it to drift well over the head of the linebacker (who he believes is still engaged with Tyron Smith) and be an easy ball for Murray, who had one man, and one blocker, between him and the end zone.

And within a fraction of a second, he realizes that, rather than the game-winning play, he's made one that drastically reduced his team's win probability.

Call it inexcusable if you like. He wasn't trying to fit a ball into tight coverage - he was trying to loft a ball to a wide-open back. Watching from home, you think he made a terrible throw into good coverage. From the pocket, he's getting the ball to Murray in the open field.

How could this have been avoided? By re-checking the position of the defense before releasing the ball. This would likely reduce Romo's interception rate significantly, but it would also take away what makes him great.

One thing that Romo does exceptionally well is predict where players are going to be during the play. This is what helps him to look off defenders. This is what allows him to pull off his 'Romodini' spins away from blindside rushers. This is also what leads him to throwing mind-boggling interceptions.

Would you have him look on every throw, and become purely a combination of arm strength and accuracy? Or would you like to continue having a player who really stands out among NFL quarterbacks. This is what you need to live with with this style of quarterback play. Asking for him to eliminate that weakness would be like asking DeMarcus Ware to stop jumping the snap count (another thing that's good 99% of the time, but burns us on occasion).

Special players have unique advantages while playing, but they typically come with a catch. This is Romo's catch, and, if you can get over the mindless meme that it only happens 'when it matters,' you should be able to learn to live with it.

Going into next season, however, I'm even more hopeful. Why, you ask? Injuries.

Imagine you were running an 8-8 team not named the Dallas Cowboys. To begin the offseason, you get a phone call saying that you've just been traded, for a 7th round pick, Sean Lee, Bruce Carter, Jay Ratliff, Phil Costa, Barry Church, Kenyon Coleman, Orlando Scandrick, and a number of lesser-known players such as Brandon Bass, Matt Johnson, Danny Coale, and Orie Lemon (excuse the names I left off - it's dizzying to recollect).

Would you feel like you could possibly be improved, just a little, by those additions? I'd think so.

Along with a whole class of draftees and UDFAs, there's a whole buffet table of talent, new and old, being laid out at Valley Ranch. I'm sure Jerry, Stephen, Jason, and - most of all - Rob, can't wait to dig in.