Winning in the NFL today is all about passing efficiency. You tend to win games when you pass the ball effectively - or prevent the other team from passing effectively. The teams that do both at the same time usually end up in the playoffs. The Cowboys are not one of those teams and consequently did not make the playoffs.

Back in early April last year, before the draft, I wrote an article titled "Cowboys Key To Success in 2012 Is Improved Passer Rating Differential." The Cowboys had just come off an 8-8 season in 2011, and while they were ranked fourth overall as a passing offense (100.1 offensive passer rating) they were ranked a lowly 25th as a passing defense (88.4 defensive passer rating). In 2011, the Cowboys had combined one of the most efficient passing attacks in the league (and the most efficient in franchise history as measured by passer rating) with a very poor pass defense.

Proponents of volume stats would argue that the Cowboys "only" gave up 3,684 passing yards, an average value which ranks them 19th in the NFL, and that "atrocious" is not the right word to describe the Cowboys pass defense. Those people couldn't be more wrong. The number of yards you accumulate or give up has almost no correlation to winning or losing in the NFL, as we'll see a little further below.

Here are the 2012 teams as ranked by passer rating differential:

10 of the top 12 teams in this metric made the playoffs this year. Much to my statistical displeasure, the Vikings and Colts stick out like two sore thumbs in this table. Both are fundamentally flawed teams in terms of passer rating differential, but both found ways to overcome those flaws and make the playoffs.

In statistics, the relationship between two variables is called a correlation, and the strength of that correlation is measured by the "correlation coefficient". This coefficient (r²) is expressed as a number between 1 and -1. The closer the r² number is to 1 or -1, the stronger the relationship between the two variables. The closer it is to zero, the weaker the relationship. R² between Passer Rating Differential (PRD) and wins in 2012 was 0.65. At first glance, that doesn't appear to be that high of a value. But if we were to exclude the Vikings and the Colts, that correlation would jump to 0.80, the long term average for this metric in the NFL. Here's a graph that illustrates the correlation between Passer Rating Differential and wins for all 32 NFL teams in 2012: 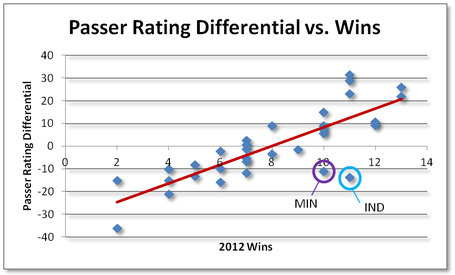 The two outliers notwithstanding, the graph illustrates fairly clearly that there was a strong link between wins and passer rating differential in 2012.

And while we're calculating correlations, here's how some other frequently and less frequently used stats correlated with wins in 2012:

Back to the Cowboys. We've established once more that passer rating differential is one of the stats most closely linked to winning in the NFL. It stands to reason that if the Cowboys want to make the playoffs next year, they'll have to improve their pass defense. And it's not just a question of waiting until the injured players on defense return to health. Here's a breakdown of the Cowboys' defensive passer rating by weeks:

The Cowboys brought in a new secondary coach and two shiny new corners, yet the pass defense regressed to a level below even that of the 2011 defense. And as we can see above, injuries alone are not the explanation, as the Cowboys didn't play any better when healthy.

At the end of the day, if the Cowboys want to succeed in 2013, they'll have to fix their passer rating differential. How they go about that, via an improved pass rush, improved secondary or perhaps even an improved offense, is largely a philosophical question.