Now that the heavy lifting is done on the factual side of the Cowboys roster and salary cap situation, it's time to get into some wishful thinking.

I started this exercise immediately following the conclusion of the Cowboys season. I wanted to get into specifics as far as who I wanted to see join the team in what I believed would be the best plan of attack for making it back into the tournament, and also be a contender for years to come. I was derailed halfway through by the Cowboys switching from a 1-gap 3-4 scheme to an incoming version of the Tampa 2, 4-3 under. Then as I started writing the supporting, introductory paragraphs they ended up being their own articles.

For Part I (Understanding The Cap), Part II (What To Do With Romo), & Part III (What Can Be Done With Current Players), feel free to click on the respective links. They should help you understand how I'm arriving here.

Here's where I stand based on the salary situation and what I believe Dallas will do (based on assumption they are $20m over the expected $121m cap):

These moves, obviously contingent on the participation of Romo, Carr and to a greater extent Free and Austin, would take Dallas from $21 million over the cap to $16.8 million under the cap. The club also has reportedly between $2 and $5.5 million in 2012 space cap carryover to use ($18.6m to $22.1m). When figuring in that Dallas has to use $5 million on the Mara penalty and approximately $2.5m of cap space on their six 2013 draft picks, the Cowboys would have between $11 million and $14.5 million to spend on free agency.

Dallas would have 45 players under contract (including draft picks) - leaving 8 vacancies for free agents, UDFAs or players currently signed to futures contracts. Obviously the 53 man roster would be fluid based on the 90-man limit of who was invited to training camp, injuries, etc. So how do they proceed? Glad you asked. Here are the steps I would take to fill the voids.

Based on these numbers alone Phillips was responsible for an average of basically 8 points per game, nearly 30 rushing yards per game, and 50 yards passing per game

The total haul of this free agency class is $9.25 million in 2013 salary cap costs. It doesn't cover every need, but in this exercise I'm going to get every draft pick I want by drafting them higher than where they are currently projected. Yes, I'm well aware that the projections will change based on the Senior Bowl, the Scouting Combine and individual workouts. For now though, here's how I would address the Amateur Draft.

I based the players availability off of the big boards of Draftek.com and CBS Sports. These moves illustrate how I would love to see the 2013 Dallas Cowboys go into battle. Obviously the club isn't checking for my opinion, but I feel a strategy along these lines covers the bases for what Dallas needs to plug holes.

The offensive line is properly addressed, the defensive line gets young premiere talent and upside additions all over. The youth is extraordinary now and there are prospects in place at each position manned by an aging star. Admittedly, the safety position is addressed by a really old guy and an injury risk, but I think Dallas wants to leave a position open for Matt Johnson.

If you're wondering about the Zac Dysert pick, just know that no matter what you think about the Tony Romo, the team has to find a new backup quarterback, at the very least. I hear foolishness about don't draft a QB because his contract will be up before Romo's extension, as if there isn't a backup QB position scheduled to cost Dallas $5 million of 2014 cap space.

Here's a visual as to how it would play out on the field. 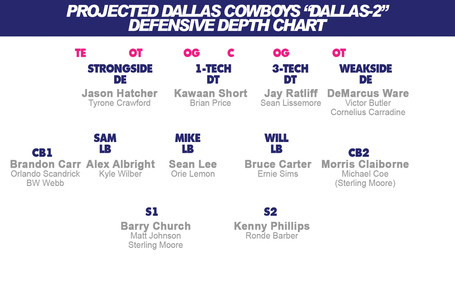 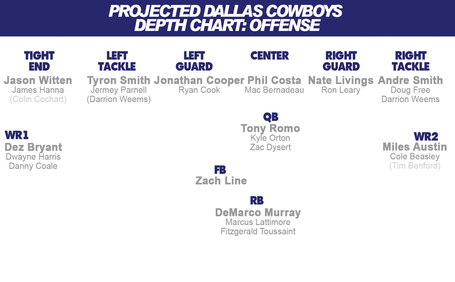 Well, there you have it, the final act of my Roster Talk series. I hope you enjoyed it. Let me know what you like and of course what you don't from these additions. I look forward to discussing things with you.