Identifying the Mike linebacker is a key part of setting the protection for an offense. We take a closer look at what happens once the QB calls out the Mike.

As the Cowboys move from a 3-4 scheme to a 4-3 defense, there'll be a lot of changes on the field. The Cowboys have been running a base 3-4 scheme for the last ten years, and as Cowboys fans we've become very familiar with that scheme, but we may have become a little rusty on the intricacies of a 4-3 defense.

Over the coming months we'll have a lot of posts examining the 4-3 and Tampa-2 in great detail. Some of these posts will be hardcore Xs and Os posts, others (like this one) will be beginner level posts.

Today we'll look at how opposing offenses adjust their protection at the line of scrimmage in response to how the Cowboys linebackers line up on the field. Before we go there though, a quick definition of the three linebacker roles in a 4-3 defense:

One thing that you may have noticed as you've watched football games is that when the offense lines up, the quarterback will occasionally point at different linebackers and shout something like "50 is the Mike! 50 is the Mike!" With that, the quarterback is calling out the protection and blocking assignments he wants.

On most teams, the center is responsible for calling out the blocking assignments, and we hardly ever hear those calls on the TV broadcasts. Usually the quarterback signs off on those calls in some form or another - but sometimes he doesn't and changes the protection, which is what we sometimes hear on the broadcasts. And that protection starts with identifying the Mike linebacker.

Let’s look at a standard seven-man front with four down linemen and three linebackers. This is a fairly straightforward 4-3 lineup, particularly for the protection the offense will call. Here's an illustration of the offensive blocking assignments in that base lineup: 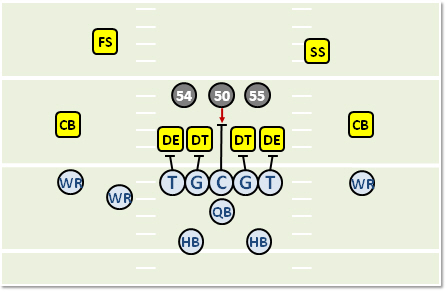 With all the defensive linemen covered, the question then becomes who covers which linebackers in this protection scheme. In the example above, the assignment is simple. Sean Lee (50) is the Mike. By calling out Sean Lee as the Mike, the QB tells the center that his assignment is to cover Lee. It also helps the guards to understand which player the center WON'T be picking up.

So far, so good. But only about 30% of the snaps in the NFL are played in classic 4-3 fronts. So for the next example, let's assume the strong safety starts to work his way down into the box as the offense lines up.

The quarterback recognizes that the safety could be a pass rusher, which would leave the QB unprotected on the strong side. At the same time, the QB knows that no way is the defense going to rush eight players. If the safety comes down, at least Bruce Carter (54) is likely to drop into some kind of zone or underneath pass coverage to cover the slot receiver.

The center, who’s already in his stance, probably can’t see the safety creeping up, so if he made the initial call identifying Lee (50) as the Mike, the QB will now change that protection and call out Albright (55) as the Mike. By making Albright the Mike, the QB changes the center’s assignment: the center now has to cover Albright instead of Lee. This is what the protection then could look like: 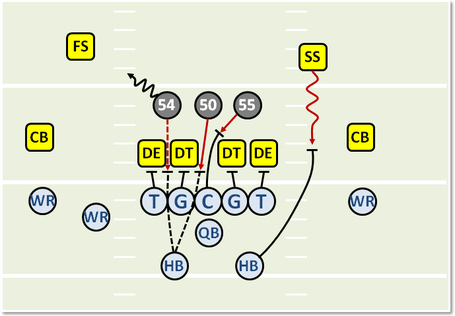 Changing the Mike to 55 also changes the assignments of the halfbacks. While they are still responsible for the players outside of the Mike, those are now different players. The strong side halfback is responsible for blocking the next man over on the strong side. In this example, that player is now the safety and not a linebacker anymore.

The play diagrams above are just two very basic examples of how to set the protection by identifying the Mike. As offenses deal with different defenses, the protection schemes can get a lot more complex. Ultimately, what an offense wants to avoid is half the line thinking 50 is the Mike while the other half thinks 55 is the mike.

Defenses often give away their weaknesses by how they line up. The key for successful defenses then is to retain an element of flexibility and unpredictability, especially in the way they attack. Identifying the Mike is a way for the quarterback to redirect protection to the area where he thinks he needs the most help. But identifying the Mike also tells the defense where the offense is bunching its protection.

And thus begins an endless back-and-forth between the offense and defense, as each side tries to exploit weaknesses in the others' scheme.