The stats that we emphasize for our football team more than anything else is the turnover differential.

Furthermore, at the Senior Bowl Garrett has stated that the primary reason Ryan was fired was lack of turnovers. So was he justified? 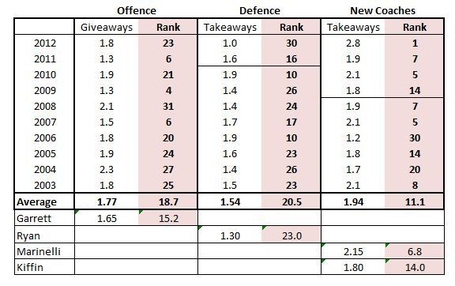 First lets look at Garrett's performance. In the four years before he arrived, the Cowboys had never finished better than 20th and that was with Big Bill in charge. On Garrett's arrival, giveaways fell to 6th in the league. Now Garrett has yo-yo'd through his tenure, going inside the top 10 3 times, but each time bouncing back out to the bottom 10. If he continues this trend, we should see a top 10 placing on giveways in 2013! (but then he needs to start a new trend....)

Now Ryan. The Dallas D has been consistent in this department - consistently poor. In 10 years it has never got a single digit ranking in takeaways. Interestingly, one of the best periods of performance was the 8 games after JG took over as Head Coach in 2010, where the team would have ranked in the top 5 or 6 in the league. In the two years under Ryan, takeaways have declined, with a 30th ranking in 2012, a 10-year low. Furthermore the Cowboys ranked #32 in interception % as well as #32 in passes defenced (a driver of interceptions). So it seems well justified to fire Ryan on this stat.

So will things improve under Kiffin and Marinelli? Well their track records would certainly suggest so. The third column in the table lays out Kiffins last years at Tampa to 2008 and then Marinelli's at the Bears from 2009 to 2012. A vast improvement with 6 top 10 rankings in 10 years, including #1 in 2012. Interestingly, Marinelli's 3 years as DC at the Bears were exceptional (2009 he was D-Line coach) - finishing 5th, 7th and 1st. So these guys know how to do it - question is can they teach our players and how long will it take?

As Garrett says in his quote,

Certainly in 2012 it was significant, as the table below shows:

These win rates carry over into the playoffs, with this article detailing the following:

Since 2000, teams that have been plus-1 in turnover margin have won 92 of 128 postseason games (a winning percentage of .719). Teams that have lost the turnover battle have won just 14.8 percent of the time.

So a positive turnover differential won't just help you get into the playoffs, it will also help you win once you get there.

So Garrett's approach does have strong statistical support - now they just have to execute it! And those two new Defensive Coaches should help a lot.