We look 15 years into the past to attempt to discern what philosophies Monte Kiffin will employ while with the Cowboys.

It's difficult for many to imagine what exactly Monte Kiffin's defense means for the Cowboys, and there are a number of reasons for that. First of all, he's been coaching at USC under his son, and also previously for a year at Nebraska, essentially obscuring his true schemes from our memory.

He was in Tampa Bay for quite some time, but Tampa's effectiveness and roster strength quickly declined under media darling (and front office pariah) head coach Jon Gruden. Chicago and Minnesota, among other teams, began to adopt a "Tampa 2" style of defense, but they weren't, and aren't, Kiffin's defenses.

For this reason, we go all the way back to 1998, when Kiffin was comfortably running his innovative defense in Tampa Bay with much success (and, coincidentally, when the playbook I've come to possess originated from). We haven't seen a real Monte Kiffin defense in years, so it's only logical to go straight to the source. 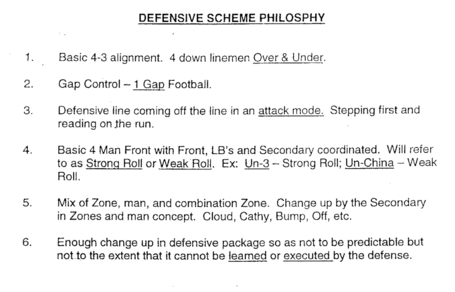 I teased this image at the end of my last article. These are the Defensive Philosophies Kiffin built his scheme around. Let's take a look at them in order.

1) Basic 4-3 Alignment: Kiffin believes in using only the Over and Under variants of the 4-3. This is because the base 4-3 is an even front. The over and under shifts create odd fronts, which is the only style Kiffin likes to play. (Even and Odd refer to the techniques of the defensive linemen, as outlined in my previous post on the subject.)

3) Defensive Line in Attack Mode: Probably not something you think of when you consider the Tampa 2 a conservative scheme. In reality, Kiffin wants his players to attack first and think later, hopefully once they're in the backfield with their arms around the ballcarrier. This type of aggression should be a change from the 'cerebral' play required in some of Rob Ryan's more elaborate plans.

4) Front, LBs and Secondary Coordinated: Essentially, this means getting everyone to know the entire play by incorporating every aspect into the play's name, which is still kept relatively short. This is a concept (everyone knowing every position's role) that Ryan attempted to implement. It may never be possible to gauge his success in that pursuit, as many of those players did not survive the 2012 campaign in order to demonstrate cohesion.

5) Mixed Coverages: Kiffin will change up the coverage. Contrary to popular belief, the S-MLB-S deep zone of Tampa 2 fame is not the only look we'll be presenting on Sundays. We'll still give our press-man corners a chance to shine, but we'll also be giving them protection that they might jump routes, and mixing in some combination coverages to keep the quarterback thinking.

6) Unpredictable, but Still Learnable: Kiffin will not run a 'simple' defense. Rather, his defense will be 'just complex enough.' Of course, it's easy to claim that you will execute with perfect balance. It is far more difficult to deliver on that promise.

Kiffin also produced two more extensive lists of his 'Defensive Team Philosophy' and 'Defensive Objectives.' His thorough explanations should suffice without my interjection: 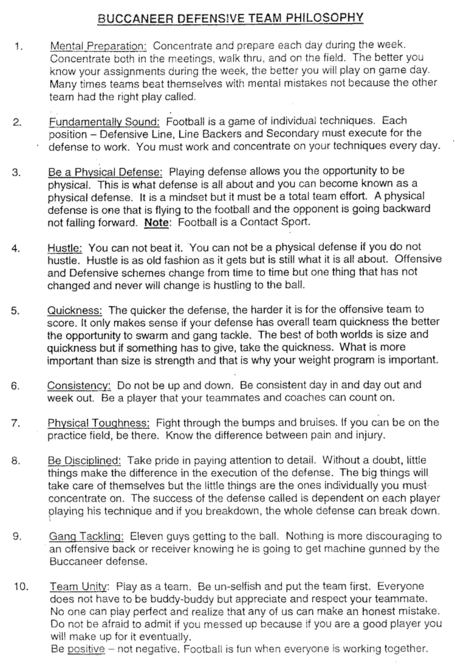 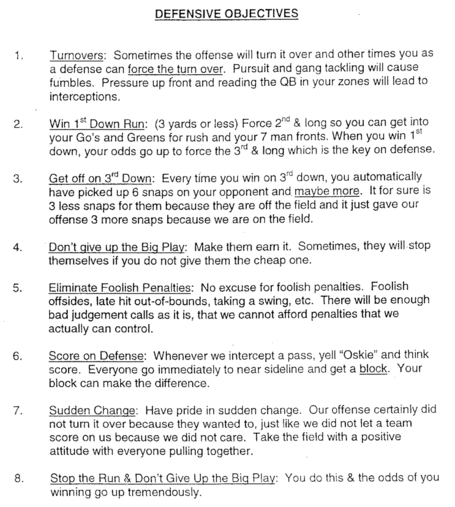 I'm sure we can all agree with these.