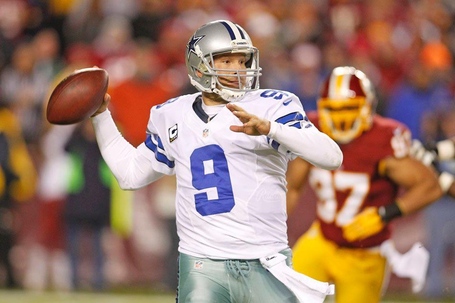 Despite this game performance, Romo is not really what ails this team.

The Dallas Cowboys are 8-8 for the second straight season. Jerry Jones has made it clear that he would like to see more progress and expects a better return on his cash investment.

As with any business, an analysis designed to measure the efficiency of different areas in reference to established landmarks generally isolates issues and strengths. There are facets of the 2011 and 2012 Dallas Cowboys that are outperforming the team's record.

In order to establish the milestones associated with winning, losing and average football teams, a baseline of performance was established by segregating teams from 2007 through 2012 in seven categories. Only regular season wins were used to establish the categories.

Because the sample of 192 teams contains organizations that frequently cross over from one group to another, a homogenization of styles occurs to a degree, minimizing interference from stylistic differences inherent from specific squads. No data was manipulated through elimination, repetitive inclusion, or altered from its original source (ESPN Stat and Information) unless noted.

The purpose and rationale behind the stratification of teams serves two purposes. First, the sample sizes are greater due to the groupings. Second, the analysis is facilitated through seven distinct categories.

Notice the near perfect bell curve formed by the distribution of teams in the different categories. The allocation of teams meets with the desired outcome of the National Football League, whereupon most teams accumulate between 7 and 9 win per season, and relatively few dominate or struggle mightily. 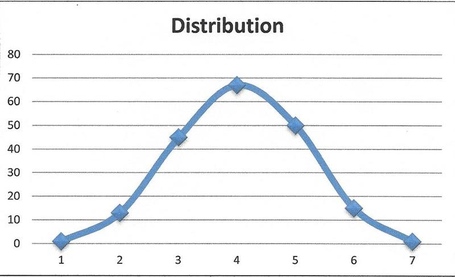 Interestingly, there are many statistics that correspond to winning. For instance, there is a remarkable linear correlation between the number of yards a team gains during a season, and the number of wins it registers. 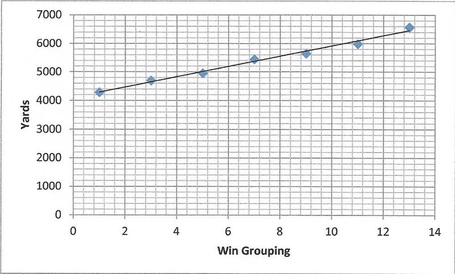 Teams that gained more yards on offense, for the most part won more games. By isolating the specific output generated by the Dallas Cowboys against these normalized milestones, such as total yards, a better understanding of which aspects of the Cowboys are either outperforming or underperforming their record becomes apparent.

The Cowboys offense accumulates yards consistent with teams that win between 13 and 15 games a season. Dallas boasts an offense comparable with these dominant teams.

As could be expected, there is a relatively strong correlation between scoring and winning (all data represented with red squares). The correlation is even stronger when the points scored by Detroit and the NFL record breaking 2007 Patriots are eliminated (small blue data points). 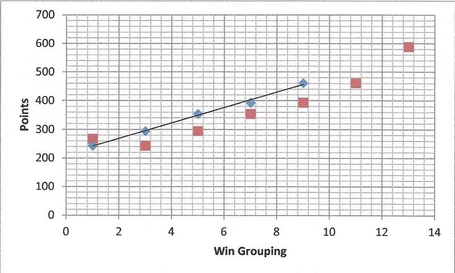 The Cowboys score points consistent with a team around 8 or 9 wins. In other words, despite moving the ball like a team with at least 13 wins, Dallas scores more like teams with 7-9 wins: which the Cowboys are.

Obviously, there is a significant drop-off from the total yards produced by the offense and the points Dallas scores. The decrease, however, does not account fully for the Cowboys record of 8-8, since the offense moves the ball similar to a dominant team, and scored about the same as a 9-win team last season.

There are numerous areas in which the Cowboys underperform that contribute to their record. As touched upon in this post, this team needs to score more. As suggested by the caption under the picture, however, Romo and the passing offense is not the main culprit.

The accomplishments of the offense and defense will be compared to the means established by the other 190 teams involved in the study. Hopefully, information revealing the relative weaknesses and strengths of the Cowboys will be exposed, facilitating a better understanding of where this team needs to allocate resources, and where Jerry Jones should look to make changes.