"One, Two, Go!" - Why The Cowboys Pass Rush Is Coming Up Empty

Perhaps the reason why the Cowboys' pass rush has looked less than stellar over the last two games has less to do with the Cowboys themselves and more to do with the offenses they are facing. We take a look at how fast opposing QBs are getting the ball out and whether that has any bearing on the pass rush.

Share All sharing options for: "One, Two, Go!" - Why The Cowboys Pass Rush Is Coming Up Empty

The widely reported demise of the Cowboys pass rush can be easily visualized with a couple of pass rushing stats from Pro Football Focus, who track QB sacks, QB hits, and QB pressures. Here's how that looks for the Cowboys over the last five games:

Just so we're all on the same page, here's a summary of the how all four metrics in the table above are defined:

What many people saw with their own eyes is confirmed by these metrics: After a strong start, the Cowboys have not gotten a lot of pressure on the opposing QBs recently.

But before we go any further, a couple of words on the stats we're using here. QB hits and QB pressures are unofficial stats. QB hits are tracked in the individual NFL gamebooks but are not officially tallied, pressures aren't tracked by the NFL's official scorekeepers at all. However, the Cowboys also track sacks, hits and pressures as linebacker coach Mat Eberflus mentioned in the 2012 offseason when he talked about Anthony Spencer:

Linebackers coach Matt Eberflus points out that Spencer was fourth in the league in sacks (6), pressures (31) and hits (9), though pressures and hits are unofficial stats.

In Spencer's case, PFF saw 6 sacks, 9 QB Hits and 35 QB pressures. That's only four pressures more than the team recorded, but close enough to the numbers the Cowboys use to make me feel very confident about the PFF numbers.

So now that we have the numbers that show the apparent demise of the pass rush, the key question is why have those numbers declined. If you were paying any attention to the Cowboys coverage since Sunday, you'll probably have run across multiple explanation attempts. Here are some examples:

One of my pet peeves is that we as fans often focus so hard on our own team that we underrate and often even totally negate the efforts of the opposing team.

The Cowboys gave up 48 points against the Broncos? Clearly, that's because the pass defense sucks. It has nothing to do with playing Peyton Manning, who's just put together the hottest 5-game stretch by a QB in the history of the NFL.

For the most part, the discussion about Romo's interception is centered on whether he should have thrown to Escobar or not. The fact that Broncos LB Danny Trevathan made an exceptional play with his highlight-reel-worthy, diving interception did not receive a lot of airplay in Cowboys Nation.

But the other guys get paid too. And when you look at the explanations for the disappearing pass rush listed above, what they all have in common is that they are all more or less focused on the Cowboys, and don't factor in the competition very much.

When Jason Garrett was asked why the pass rush hasn't been producing at the level it did in the first few games, Garrett pointed to the quick releases of both Peyton Manning and Philip Rivers as major factors:

"One of the challenges when you play against Peyton Manning and also a couple of weeks ago against Philip Rivers, those guys are really smart, they’re also quick getting the ball out of their hand," Garrett said. "We saw that on tape. I think Peyton Manning is the least-sacked quarterback in the history of the NFL. He has a really good feel for where the pressure is, where his quick options are and how to get the ball out of his hand."

Pro Football Focus, although better known for their grades, also produce some stats of their own. One of them is "Average Time to Pass Attempt", which measures the average time from the snap of the ball to a pass attempt. According to their measurement, Peyton Manning is ranked with the third-lowest value in this metric, averaging a pass attempt 2.29 seconds after the snap of the ball. Philip Rivers is not ranked far behind Peyton, coming in fifth in the league with 2.32 seconds. For comparison, Tony Romo is ranked a joint twelfth with four other QBs at 2.57 seconds, while Michael Vick brings up the rear with 3.06 seconds.

The table below lists the Time to Attempt for the five QBs the Cowboys have faced so far, and also lists the QB disruption points the Cowboys defense has accumulated against each:

The Time to Attempt value is the cumulative value each QB has averaged over the first five weeks of 2013 and is indicative of the style of play that team's offense prefers. Both Rivers and Manning get rid of the ball faster than most other QBs in the league. The QB Disruption points show how successful the Cowboys defense was against the particular quarterback in that one game, and there is a strong correlation between Time to Attempt and the Disruption Points, as the graph below illustrates: 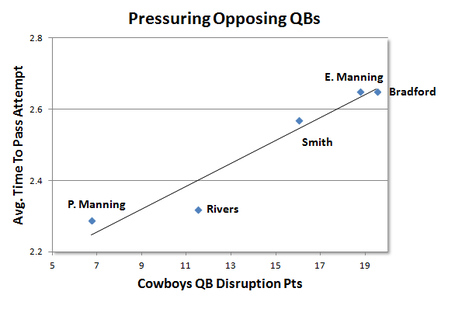 In statistics, the correlation coefficient measures how strong the relationship is between two variables. This coefficient is often referred to as "r²" and is expressed as a number between 1 and -1. The closer the r² number is to 1 or -1, the stronger the relationship between the two variables. In the graph above, r² is 0.93, an indication that the Time to Attempt is very closely tied to a defense's ability to get to the QB.

Put simply: The faster a QB gets rid of the ball, the less likely he is to get pressured. That's not rocket science, but in our case it helps explain why the pass rush stats have dropped off so strongly: Rivers and Peyton got rid of the ball so fast that the pass rush hardly had a chance to disrupt either QB. That's an observation that Bob Sturm also made in his latest Kiffin Report:

As I have written many times, nobody has managed to preserve their own health like Peyton Manning. He is the industry-leader in avoiding sacks and big hits and you just can't punish him physically because he doesn't have the ball long enough for your pass rush to impact him. And when you blitz him, he can get the ball to a winnable matchup in under 2 seconds. And no matter how good your pass rushers may be, it is difficult to get to the QB in 2 seconds unless they forget to block you altogether.

Also, a closer look at how Manning and Rivers have fared against other defenses shows that the Cowboys' pass rush generated roughly the same amount of disruptions as other teams did against either the Broncos or Chargers:

Perhaps the reason why the Cowboys' pass rush has looked less than stellar over the last two games has less to do with the Cowboys themselves and more to do with playing two QBs who have done a terrific job getting the ball out before the rush gets to them.

The correlation graph above, more by coincidence than by design, suggests there could be three tiers of QBs the Cowboys defense will face over the remainder of the season:

Using that color designation, here's what the remainder of the season could look like from the perspective of the Cowboys pass rushers:

The Cowboys will face two more "red" QBs in Matthew Stafford and Aaron Rodgers this season, and both games will likely be challenges for the Cowboys' pass rush. Drew Brees and Robert Griffin (twice) present their own unique challenges to any defense, but both are average in their Time to Attempt, so the Cowboys pass rushers should look a little better against both. The remaining QBs on the schedule take their time before throwing and should provide opportunities for a good pass rush. Note that Matt Cassel's number is from 2012, as he doesn't have enough snaps in 2013 yet to warrant inclusion here.

And if the Cowboys' pass rush doesn't get back on track against opponents with a longer Time to Attempt, we can always go back to the simpler explanations: They're simply not very good.