As the Cowboys complete their preparation for their Week 6 match up with the Washington Redskins, let's look at a few things we should expect to see from Jim Haslett's defensive unit on Sunday night.

Since the Cowboys play their NFC Least East foes twice per year, rather than doing a full breakdown on both sides of the ball, I will look at one side of the ball leading in to each match up. Today we will look at the Jim Haslett's defense and how they generate pressure inside.

In the second matchup between the Cowboys and Redskins in 2012, Haslett was able to create pressure in Tony Romo's face almost anytime he wanted and many times the blame for this was placed on the guard play of Nate Livings & Mackenzie Bernadeau. However, I want to show how this trend for Washington has extended into the 2013 season and why they are so effective and productive when they bring pressure inside.

Let's start with a look out of Washington's base 3-4 personnel. 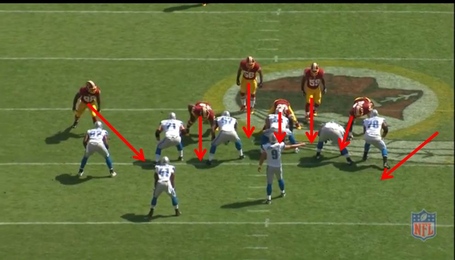 This is the same pressure look that gave the Cowboys fits in week 17 last year. The first thing to notice from this look is the position of the DE's in their 3-4. Their normal position is either a 4 or 5 technique which would be heads up, or on the outside shoulder of the tackle. However they have these players "reduced" to a 3 technique on the outside shoulder of the guard. This is a look we will see often on Sunday night, as this makes the reach blocks inside on an outside zone run by the OG's and OC very difficult to execute and combining this alignment with the inside LB's "Sugaring" the A-Gaps, puts the interior of the offensive line in a bind pre-snap in pass protection.

Once the ball is snapped, both ILB's come on the blitz which creates a ton of problems for the O-Line. The NT rushing up the middle of OC keeps him from helping one way or another, and the reduced alignment of the DE's puts 5 defensive players rushing against 3 blockers for the offense. This is essentially unblockable when you consider the fact that Brian Orakpo and Ryan Kerrigan are both very effective edge rushers who will win a lot of 1-on-1 matchups.

In situations like this, it becomes very important for the QB, RB, and O-Line to be on the same page. Most times there will be a man coming unblocked, (hopefully from the edge rather than up the middle), and that man becomes the QB's responsibility. He's got to get the ball out of his hands before that guy gets to him.

This look is pretty simple from a scheme stand point but it can really give offenses problems, because most QBs struggle when they face quick pressure up the middle in the pocket. Let's take a quick look at a couple more pressure packages from Washington. 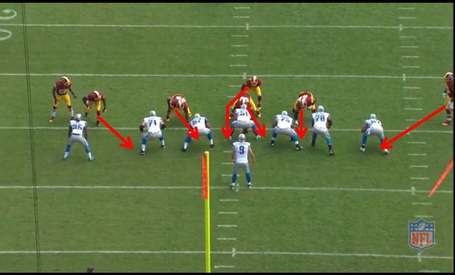 This is a similar look that threatens both A gaps, and out numbers the inside O-Linemen, while testing the edges with an OLB and a DB pressure.

My answer to this look would be to slide the protection to the left, leaving the DB coming off the edge to the offenses' right in order to let the QB see him coming while also giving the RG and RT a chance to collapse the pressure inside, and give the QB a chance to get the ball out quick. 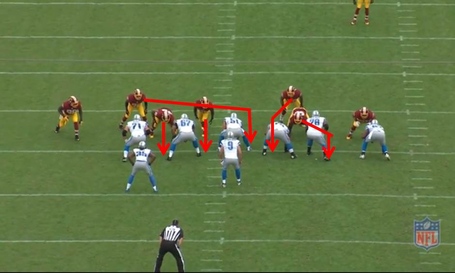 This is a little more exotic look from the nickel (2-4-5) look by the Redskins. Having the safety in the box and bringing him in the pressure scheme puts pressure on the OL by really testing the A & B gaps on both sides. This one is at least blockable by sliding everyone down to compress the protection, however, the presence of both OLB's on the edges, as well as the overload alignment pre-snap means there would likely be a full slide protection called, moving everyone to the right. This works right into the defenses hands however, as the LOT would likely be left with no one to block, and someone, likely the looping blitzer or the LB in the right A Gap would be left unblocked, or left for the RB to pick up.

This front seven featuring guys like Barry Cofield, London Fletcher, & Stephen Bowen as well as Orakpo & Kerrigan can cause problems both in the run game and for protections, however the Washington secondary has had trouble covering. If the Cowboys improvements on the O-Line continue, and they are able to give Tony Romo time, he should be able to follow up last weeks record setting day with another very good performance and put this Cowboys team in position to get back to .500 and keep at least a share of first place in the NFC East.