As the Cowboys complete their preparation for their Week 7 match up with the Philadelphia Eagles, let's look at a few things we should expect to see from Chip Kelly's offensive unit on Sunday.

Since the Cowboys play their NFC Least East foes twice per year, rather than doing a full breakdown on both sides of the ball, I will look at one side of the ball leading in to each match up. Today we will look at Chip Kelly's offense in Philadelphia, and what they do to compromise defenses.

When the Philadelphia Eagles hired Chip Kelly, the offensive guru from the University of Oregon, to replace Andy Reid as head coach, discussions began about whether or not his offensive system from the college level would have similar success at the NFL level.

All kinds of arguments were made for both sides, but two undeniable differences must be pointed out.

A) The Field - In college football the hashmarks are 40 ft apart, resulting in a distinct wide side, and short side of the field, which is important for a spread to run team like Kelly's Oregon teams. Teams at the college level design certain runs to be "boundary" runs which will be run to the short side, and others to be "field" runs, which go to the wide side. In the NFL the hashes are 18.5 ft wide, which somewhat eliminates the wide & short side of the field, changing the play design, and play calling of an offense.

B) Personnel Limitations - At the college level teams can virtually carry as many players as they choose.They have limitations on numbers of scholarships, but can carry many more players than the 46 that the NFL allows teams to take to a game. This is important for a coach like Kelly because of the tempo he likes to play at. His teams run a play about every 15 seconds on average, which is great in college when you can run out wave after wave of WRs and RBs, however at the pro level when your WR & RB numbers are limited, you have to pick your spots for tempo through out a game.

That said, what Kelly is actually running in Philadelphia is very similar to the types of things he was doing at Oregon, and he is still having a lot of success, (LeSean McCoy is the NFL's leading rusher by 99 yds). To get an idea of how Kelly puts defenses in a bind let's take a look at a few looks they showed in their Week 6 game vs Tampa Bay with Sunday's starter Nick Foles at the helm at the QB position. 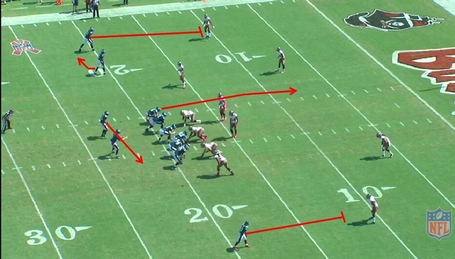 Here we have the Eagles in 11 personnel in a Trips Left Near formation, and the play call is essentially a triple option play for Foles.  His three options are a give to the RB, a bubble screen to his slot WR and the seam route to the TE up the field. The offensive line doesn't care which option Foles picks, they are blocking the zone run play to the right no matter what.

Although I'm not sure of Kelly's exact coaching points here, Foles is likely reading the nickel CB (or safety) and the Sam LB on this play. He's probably reading the LB first to give him the run/pass read and then the nickel CB or safety to determine the seam or bubble throw. If the LB flows with the run, or attacks down hill for the run, Foles pulls out to pass, if the DB he's reading rides the TE on his seam route, he throws the bubble, and if they attack the bubble or the run, he throws the seam.

No matter what he's getting the ball to a guy with a favorable situation numbers wise. 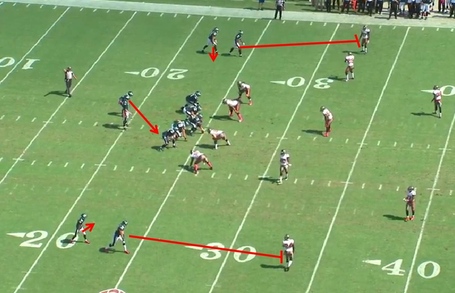 This play is a little easier to understand but still very difficult to stop. The Eagles are in either 11 or 10 personnel here, with stack alignments split to the numbers or outside the numbers on both sides. The front WR in the stack is blocking the most threatening defender, and the rear wideout is running a "smoke" route (turn your #s to the QB).

There is read-option action in the back field with the RB. Foles is likely picking a smoke side pre-snap, and reading give or throw based on the reactions of a player at the LB level. As is the case before, the OL is blocking the run play. 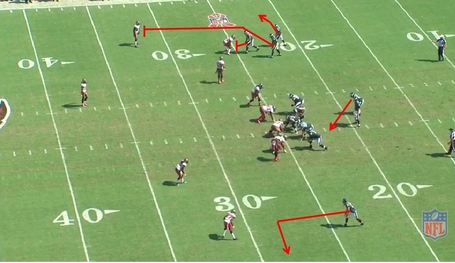 Here we have an alignment that you see a lot from the Eagles. A trips bunch set, that is split wide. Many times you see your bunch alignments pulled tight to the core of the formation, however Kelly tends to split his bunches out to the numbers. When you get this look from the Eagles on Sunday, you should be expecting the bubble screen to that side.

That is the case on this play.  If you look to the top of the screen you see four Bucs defenders playing "box" technique (4 on 3 in a bunch), with the near-side safety creeping close to the LOS. This pre-snap look probably alerts Foles to look to the single WR side as his pass read. If the safety comes up, he throws the out, and if the safety retreats, he gives to the RB. Again, the OL blocks the run play. 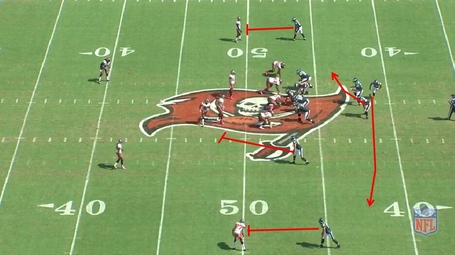 This play is vintage Kelly at Oregon. Line up split backs and send one guy in "Jet"  motion (sprint across formation) behind the QB. This motion sets up that player to catch a bubble screen throw on the run at full speed, and also creates flow in the defense, then the QB fakes the read-option to the RB, pumps to the bubble, and comes back to the RB on a slip screen with blockers out in front.

This is the kind of misdirection that can get LBs and safeties in really bad spots. Then you get two or three OL out in front of LeSean McCoy who is deadly in space, and you've got a recipe for a huge play. 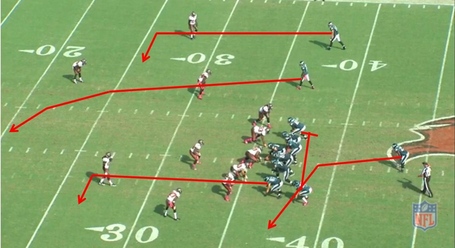 Finally we see the Eagles line up in a "traditional" NFL formation. In 12 personnel they put both TE's to the left in a "Wing" alignment, and put the X receiver in this case DeSean Jackson in the slot to the right.  This is the play Kelly called to get Foles a shot deep down the field which resulted in a 36-yd TD throw to Jackson.

The concept here is really a "Flood" combination, which is just a three-man vertical stretch designed to test Cover 3.  However, instead of running the deep route from the outside on the flood side, they are simply running the X across the field deep to set up the vertical stretch. This is a perfect example of how guys like Kelly will use window dressing (formations, motions, personnel) to give the defense different looks, while running base concepts and giving your QB a basic read.

This play featured play action and Foles was able to hit Jackson in the end zone to his left. Admittedly the safety who was covering Jackson did a poor job of staying on top of him and was completely out of the play by the time the catch was made, but this play put him in a bad spot with no help because the near-side safety had to sit down on the out route by the TE, while the corner drove the flat route by McCoy.

This Eagles offense will be a big time test for Monte Kiffin's defense. Guys like Sean Lee and Bruce Carter will have to be all over the field as they were in Week 6 against Washington, and Barry Church needs to return to his early season form to have success. For the most part the ball is going to come out very quickly, and will be going mostly side-to-side with a lot of misdirection and run action.

If I was Kiffin, I would play a lot of Cover 1 in this game with Barry Church in the box. With the Eagles in 11 and 10 personnel often, I want to get seven in the box and get guys in the face of the WRs. I want my guys on the outside to be worried about their man and not much else. The DB's are going to have to tackle very well and they will have to play LeSean McCoy with a lot of discipline. The defensive line will need to be disruptive, especially from the DT spots.

In pure passing situations (3rd & 7+ and end of half) I want to bring different pressures (Fire-Zones, Man-Dogs, and Cover 0 pressure) to force Foles to make a quick throw and hope to create turnover opportunities.