As the Cowboys complete their preparation for their Week 5 match up with the Denver Mannings Broncos, let's look at a few things we should expect to see from John Fox's team on Sunday.

There has been a ton of discussion across many media outlets this week regarding the high level at which the Broncos are playing and when you watch them on film, it is easy to see. They have the best quarter back in football (of all-time IMO) and he has "A Vast Array of Weaponry" (shoutout to KD's Fantasy team with that name, who my team defeated in Week 3) with which to attack defenses. You see him gain an increased understanding throughout the game of what defenses are trying to do to him, and they put up flurries of points in second halves.

It is true that Demaryius Thomas, Eric Decker, Wes Welker, and Julius Thomas present a ton of problems for defenses, however, with the exception of a game against a bad Raiders team, Denver hasn't dominated opponents from start to finish. In Week 1 against the Ravens, Denver trailed 17-14 at the half, in Week 2 vs the Giants, it was 10-9 Broncos at the intermission, and in Week 4 they led the Philadelphia Eagles 21-13 after two quarters. These are hardly dominating performances.

However, in the third quarters of these games, the Broncos scored 21, 14, & 21 points respectively. While giving up only a single TD to the Giants. So these games were blown open by a flurry of points and stops over a 15-minute period that made the games look completely outlandish.  These third quarter performances have been followed by fourth quarters featuring teams scrambling to score points as fast as possible, throwing out the game plan and trying to make big plays. Denver has been able to answer with pressure packages and turnovers, as well as big plays in the kicking game that keep their opponents out of the game.

My keys for the Cowboys are as follows:

Passing Game
The number one passing concept in Peyton Manning's arsenal is the "Levels" concept that I wrote about when we were preparing for the Cowboys dismantling of the the St. Louis Rams, so I won't go over that concept or the "Dag" variation that Manning likes to run, instead I want to look at a variation on another base route scheme that Manning used in their game vs the Giants to attack the outside of the New York defense. 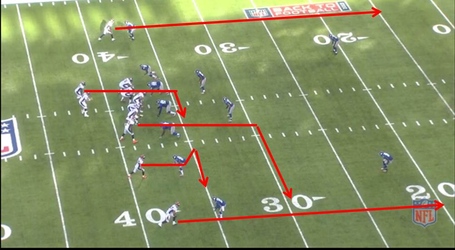 Here we have the Broncos with 11 Personnel (3 WR 1 TE 1 RB) on the field, the Giants have countered with the Nickel (5 DB) package. Denver is aligned in a Trips Rt Gun Far formation with Julius Thomas flexed slightly from the core of the formation on the closed side.
The concept here is really an adaptation of 2 base pass plays, the first is the basic Y Sail or Flood Concept, that we talked about in the off-season as one of our Cover 3 beaters, as well as the Flat-7 combination that we have discussed as the top Cover 2 beater in the NFL.
Here we have the #1 receiver to the Trips side, Eric Decker, running a go route, with #2 Wes Welker running the "Whip" Route, and #3 the TE J. Thomas running the 10 yd out. These three routes together form the vertical stretch vs Cover 3, and the Out plus the Whip provide the variation of the high-low vertical stretch placed on the CB in Cover 2.
This combination is rough to match up with in Man coverage, because of Welkers ability to create separation and puts all kinds of stress on most base zone coverages. Especially with a QB who you're sure is going to make the right decision.
I won't go much more indepth into the particular schemes the Broncos will use, as there are lots of resources available out there for that. If you're interested in learning more about the schemes visit either this page, or this one.

The Denver defense led by defensive coordinator, and next coach of the USC Trojans, Jack Del Rio, have been playing without their best player, Von Miller, who is suspended for 6 games, and their veteran leader, Champ Bailey who is suffering from a foot injury. However, they have had the benefit of playing with large leads in the late parts of games, allowing them to focus on stopping one dimensional opponents in the air, and putting pressure on QBs.

Let's look at an interesting wrinkle from Del Rio's unit that I believe will point to what the Cowboys will see on Sunday. 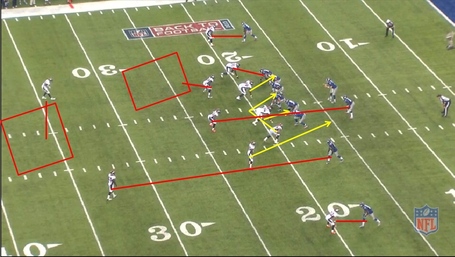 In this shot, the Giants are in 11 Personnel in a 2x2 Far formation with the Broncos in Nickel personnel.  This particular scheme from the Denver D is an interesting way to attempt to get pressure with 4 players, even if the 4 aren't your 4 down linemen.

On this play, the Bronco's essentially exchange their Nickel CB for their Closed (Strongside) defensive end in the pass rush.

The nickel CB Chris Harris, comes off the open edge, while the DE on that side twists inside his adjacent DT and the opposite DT, scoops to the contain rush responsibility.  The Broncos are now in a Cover 1 "Robber" look with their DE playing man to man coverage on the Giants TE.  He does have immediate help from the Sam LB and help over the top by the safety.  This look creates the illusion for Eli Manning that there are more than 4 guys coming in the pressure scheme, while still being very sound from a coverage stand point.

As I watch the Broncos defense I see these ideas often, whether it's a 4 man rush like this, or a fire zone (5 man rush with 3 deep 3 under zone coverage behind it), the Broncos will bring different players at the QB from all over the field, but they do so with out jeopardizing themselves on the back end in coverage.

I think, just like every team every Sunday in the NFL, the Cowboys have a chance to win this week. They will have to be very good, if not perfect in each of the areas I discussed above, but I truly believe they have a chance. If they can force Manning to drive the length of the field, without help from turnovers, or big returns, they can increase the likelihood he makes a mistake, or someone else on his unit does, and give themselves an opportunity to win it at the end.