Fans and media alike will have a lot to talk about this week, most of it centered on the Tony Romo interception. Let's look at that play to really understand what happened.

The interception was crushing, no doubt about it.  It was deflating, demoralizing, and devastating all at the same time, and didn't take long before NBC's "Football Night in America" crew of Rodney Harrison and Tony Dungy picked up the film and talked about how it was a very Romo-like play, and how he made a horrible decision. But like all decisions, it can only truly be judged by evaluating the information available at the time of the decision and determining if it was a mistake based on those conditions and conclusions that could be drawn about possible outcomes.

It's important to note, QB's are taught to read progressions in order, every snap, jumping from their first to second to third read, looking for the open area to throw to. Keep in mind that many times they aren't looking at the actual receivers but instead they are reading the area where the receivers route will end up. They are taught to throw to the first open man they find. It's also important to remember that running backs are often the last read in the progression, unless they are the designated "hot route" if the defense brings pressure.

Now, based on those constraints and with the mind of a QB, let's look at what Romo was seeing at the point he made the decision he did and let that information drive our evaluation of the play. 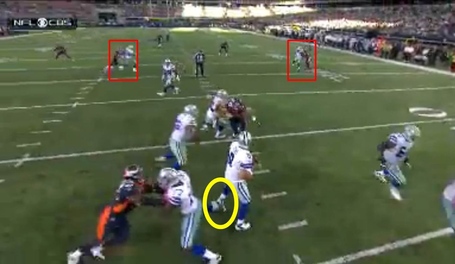 Based on the broadcast footage of the play that is available, you can see Romo's first read is either Dez Bryant or Terrance Williams who were in a trips alignment with Escobar to the left side.  Then you see Romo's head pop back to the middle of the field, moving to Escobar's route, which is likely either his 2nd or 3rd read on the play.

When his head pops around he sees the shot above, (actually about 1/4 of a second has passed between his head turning and this point, but the idea is the same). Escobar has leverage on the LB who is covering him and the nearest defender in the direction he is headed is outside of Witten on top of the numbers. The distance from the outside hashmark to the top of the numbers is 10 yards and there is just over 6 yards between the left hash and the right hash. That puts about 15 yards between Escobar and the most threatening defender in the direction he's running. The second most dangerous defender is about 8 yards down field and 8 yards to Romo's right of Escobar meaning he's just over 11 yards from Escobar and would have to come through #89's body to make a play on the ball.

By NFL standards, Escobar is WIDE open based on his route, leverage, and spacing!

This makes the throw to Escobar a no-brainer decision for Romo here. Remember he's looking for grass to throw to and there's 15 yards of grass which Escobar is running to for Romo to put the ball.

This should be an easy completion and should give the Cowboys a very manageable 3rd and 4-6 to convert and continue to march down the field to win this shootout.

Look at the yellow circle on the screen shot above.  Or look at the blown up version below... 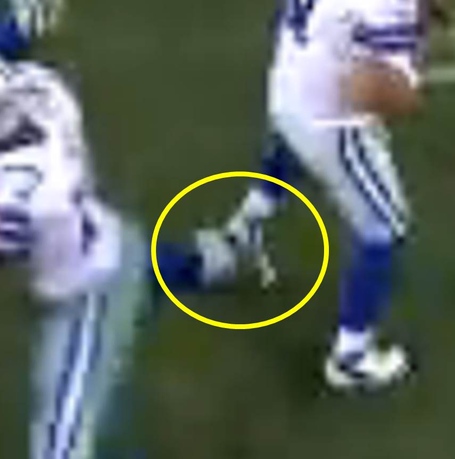 As Romo steps to deliver the ball to his wide open man, Tyron Smith's foot steps directly in his line, and as Romo's motion continues, his lower body (where power is generated) is eliminated from the throw - it becomes all arm. The difference in velocity between this ball and every other ball that Romo had thrown in the middle part of the field was noticeable to the naked eye, and even more noticeable watching it back 2 or 3 more times.

Because of the lack of velocity,  Broncos LB Danny Travathon was able to make a big time play and dive in front of Escobar, and make the interception.

We all know what happened after this play but I think we at BTB are all smart enough fans to apply the proper constraints to the situation and agree, Romo did not make a bad decision on the play.

Next Up In NFL