As the Cowboys prepare to take on the New Orleans Saints in Sunday Nights featured NFL contest, let's take a look at a few things we should expect from Sean Payton's team in week 10.

The New Orleans Saints offense, under the leadership of Sean Payton, and in the hands of Drew Brees, has been consistently productive and prolific for several years, even going back to prior to their Super Bowl win in 2009. Let's go to the film to look at some things that Jason Garrett, Monte Kiffin, and Bill Callahan have spent the last week preparing their team to face against New Orleans 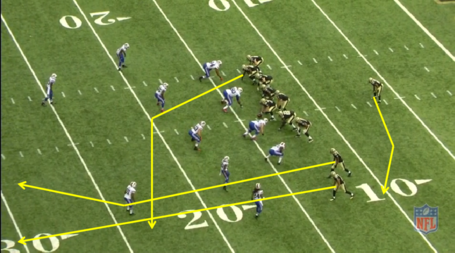 When we think of the Saints offense, we typically think of 11 Personnel, shotgun looks, spreading the defense out for Drew Brees to work. But this example actually shows the Saints in 12 (1 RB 2 TE, 2 WR) personnel with the 2 TEs set tight to the formation in line to Brees' right. This play is designed to get the inside TE (Y) open on a deep crossing route.

The 2 WRs on the open (weak) side of the formation run what essentially amount to clear out routes. They are both going to run deep, attempting to carry the intermediate and deep zone defenders, or their man defenders with them down the field. At the same time the Y, in this case Ben Watson, is going to run his crosser. His path should take him underneath the OLB to his side, but behind the MLB and he's aiming for the sideline at 18-22 yards.

By the time he gets across the numbers, the intermediate and deep guys are running down field with the WRs and the underneath defender is running up to the RB in the flat, and you've got a throw and catch that is like taking candy from a baby for Brees. One thing you'll notice is that the combination of the deep crosser and the flat route by the RB, creates a combination that looks alot like the Flat-7 combination we've talked about so much this year. 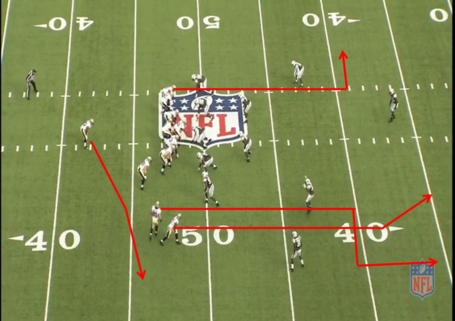 In the three games that I studied in preparation for the Saints, I saw this same exact combination go for 2 TD's of +50 yards. So when you see the Saints get between the 40's look for them to take a shot (this is very common in the NFL) and look for this scheme to be a part of it.

Here we have the Saints in 22 (2 RB, 2 TE,1 WR) Personnel, with the FB flexed to Brees right in a wing or an H-Back set, with one TE in-line to the left, and the other TE, Jimmy Graham coming in 'divide' motion back towards the core of the formation to create a stacked look with the WR on the numbers. This stacked look takes the defense out of any man coverage look they may have called, and puts them in essentially a match up zone.

When both Graham,and the WR release up field, it leaves the defenders in a bit of no mans land, and when the WR breaks to the post and Graham breaks out, the defenders can finally react. Most times the outside defender will react to the out cut, which frees Graham to get down field and make a big play.

When the Saints scored on this play with Kenny Stills in an earlier game this year, he was about as open as you'll ever see a WR in the NFL, and that's thanks to good design by Payton, and very good execution by the Saints players.

As you can probably tell, this is not a look that develops quickly, which is why the key to stopping the big play against this Saints team is pressuring Brees, which makes DeMarcus Ware's comeback today even more important.

As Cowboys fans we have seen Rob Ryan's defense have success and failure in his two years as the DC in Dallas, and we are familiar with this varying fronts, complex coverages and pressure packages. Because of this familiarity with Ryan's scheme, I want to focus on a nuance that might go unnoticed by the average fan during the game (but we know BTB'ers are not average fans!) but really puts his players in a position to succeed in getting to the QB. The Saints two best pressure players are Cameron Jordan (94) and Junior Galette (93), and it is essentially Ryan's job every week to figure out how to get them in situations to get to the QB. 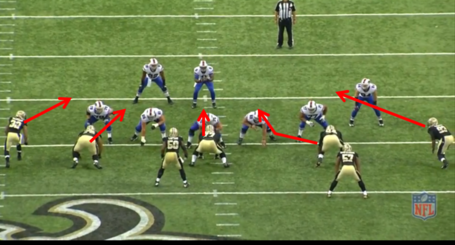 Here we see the Saints defense in their 3-4 front, however, the nuance on this look comes at the DE and OLB spot on the closed (strong) side of the formation. The OLB on this side is Galette (93) and the DE is Jordan (94), this is not dissimilar to what Kiffin and Marinelli do on the Dallas DL with Ware and Hatcher on the same side. However, because of the odd (center covered) front, with two other pressure players coming from the open side, it puts Jordan and Galette in great situations to succeed. At the snap Jordan rushed into the B gap between the OG and OT, leaving the Bills TE alone to attempt to block Galette.

Thad Lewis the Bills young QB didn't recognize this mismatch in the protection scheme, and failed to get the ball out quick, resulting in a sack for Galette, and a big play for Rob Ryan and his defense.

Every Cowboys fan can recognize that this Dallas team has the ability to play with anyone and keep games close, even against an explosive offense like the Saints have. I am hoping that the offense comes out with the attitude that they have to score 40 to win, and they put the foot on the gas pedal from the first whistle.

However, I think this game comes down to this defense's ability or inability to make a few big plays through the course of the game. When you think about this defense, huge plays have come from guys all over the field, whether Sean Lee's intercepting a pass, or Jason Hatcher or George Selvie are creating havoc in the back field (and we already mentioned getting #94 back), or Brandon Carr or Orlando Scandrick (never thought I'd write this part) are making plays on the ball and taking it away. This team has had struggles giving up lots of yards, which I think will continue today, however, if they can get one of those big plays from the defense, this team will really have a chance to come away with an upset win and go into the by week feeling good at 6-4.