What's Wrong With The Cowboys Offense Explained In Two Plays

The Cowboys offense has sputtered to a stop. Against the Saints, they offered little new and what they did offer was questionable at best.

Share All sharing options for: What's Wrong With The Cowboys Offense Explained In Two Plays

Sure, the New Orleans Saints offense blew out the Dallas Cowboys defense. 49-17 was the final score, Drew Brees and the Saints offense set all kinds of records, it was humiliating. But at least the defense has some kind of excuse to offer. They were banged-up before the game and then lost Sean Lee. You can't totally let the defense off the hook, but at least there's something you can say is a major factor. The Cowboys offense has no such excuse. Two plays in the Saints game tells me almost all I need to know about what's going wrong.

Neither of these plays involve dropped passes or penalties. Those issues have plagued the Cowboys on and off all season, but I wanted to look at some more fundamental issues.

We start with the Cowboys losing 21-10 near the end of the first half of the game. Dallas has one timeout (corrected) and 1:32 on the clock. The hope is to get at least three points, possibly seven, before heading into halftime. Dallas would get the ball to start the second half, so just maybe they could start putting some pressure on the Saints. But it all goes wrong.

The drive starts on a positive note with an 8-yard completion to Jason Witten. 2nd and 2 at the Cowboys 28. Now, Dallas had just come off a drive where DeMarco Murray put up 67 yards en route to a rushing touchdown. It's 2nd and 2 and you just spent the previous drive gouging the Saints on the ground, yet Dallas doesn't even consider a run play. Jason Garrett and Bill Callahan deserve the lion's share of the blame here. They don't even line up a back in the backfield to make Saints contemplate run, they go with 5-wide. Play-calling is suspect.

But even so, once you're in passing formation, why not use your best weapon, Dez Bryant? Because he's being double-teamed on every play and they are pressuring him at the line? Not really, look at Dez with single coverage at the line of scrimmage from a corner that is playing 7 yards off of him. 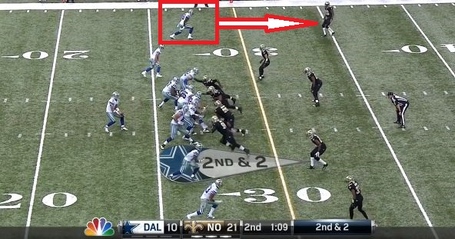 Ok, so you don't run the ball, and you don't use your best weapon when you have an open opportunity to audible to him on a quick slant, hitch, or whatever. You run the play as called. Then it falls on your quarterback to make the right throw. Tony Romo instead chose the worst of all options. 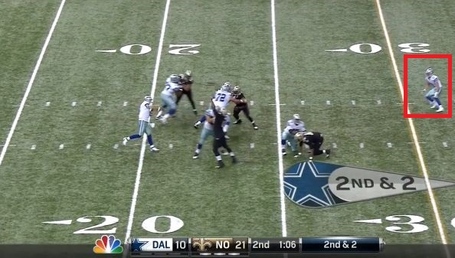 First, there's Cole Beasley wide open just past the markers. Feel free to re-watch the film on this, he is wide open and the safe choice for a first down. But say Romo didn't want to go safe on second down and wanted to get down field. Fine, but then he chooses the wrong option again. 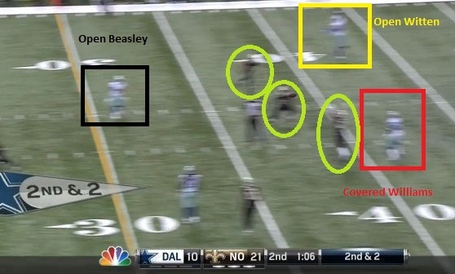 Sorry for the blurry screen capture. But it's easy to see what went wrong. There's an open Beasley in the black box. Up at the top is a wide open Jason Witten (yellow box), about 13 yards downfield and ready to get extra yardage up field. Instead, Romo throws to the most covered guy on the field, Terrance Williams in red. Three Saints (in green) are near him, one deflects the pass. Even Dwayne Harris at the bottom of the pic is a better option.

Oh, and getting back to double-teaming Dez. One of the reasons Witten is so open is because Dez has cleared out the corner and the safety. Now, if a team is going to commit those kinds of resources to Dez, and leave Witten wide open, then Romo has to take advantage of it. He didn't. See how Dez opens things up below. (Witten in yellow, Dez in red) 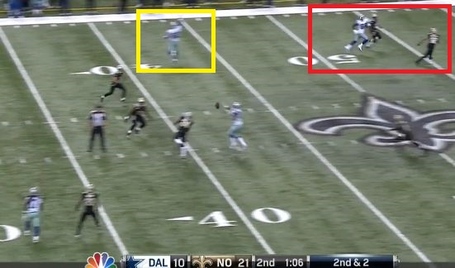 So after that play is over, Dallas faces a 3rd and 2. They really need to convert here, not only to keep alive their dream of scoring points before halftime, but to keep the ball away from Drew Brees before halftime. The Cowboys line up again with an empty backfield. (Noticeably not even attempting a run, or faking a run with play-action, or even making the Saints account for a run. It's not like DeMarco Murray is not a viable option catching a pass out of the backfield if you want to send five receivers out on the play).

Now, the Cowboys do nothing to help get someone open here. They don't run a bunch formation, they don't run any pick plays, instead the just send their guys out in the pattern. Why can other teams use formation and picks to free up guys on a third and short? You see all over the NFL each week. Instead, Dallas uses no imagination and sends five guys upfield. 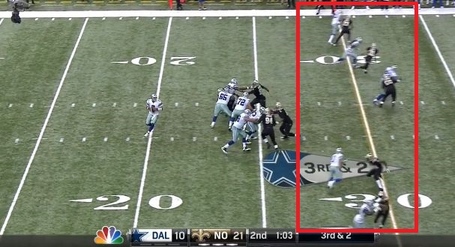 Even without any creativity, Cole Beasley manages to get a step on his guy, but instead of leading Beasley, Romo throws the ball just a tad late making Beasley reach to his back shoulder to grab the ball. That's all the defender needs to make a leap and knock down the ball. 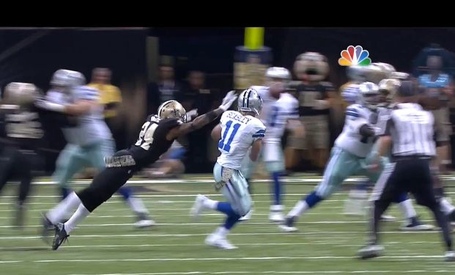 It's not a terrible pass or decision by Romo, but it's just enough of an off-target throw that the defender knocks it down. If he leads Beasley just a tad on this, the Cowboys convert. In addition, if you watch the play, Witten is being single-covered by a linebacker and is just coming uncovered when Romo throws it. If he holds the ball (he has time to) he's going to get Witten wide open crossing the middle. (see below). 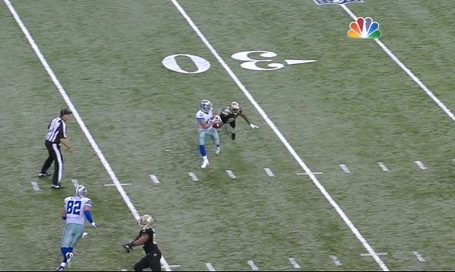 The Cowboys punt, Drew Brees puts seven on the board and the rout is on.

This encapsulates much of the Cowboys offensive woes. Last week against the Vikings, the Cowboys players failed to execute on critical plays and even though they won, the offense was sputtering. This week, the Cowboys offense collapsed on all levels. The play-calling was suspect whether it was the situation (why not run on 2nd and 2?), or creativity, (can we get a bunch formation or a pick play or something on a third and 2?). It's also clear that Tony Romo is playing poorly recently. Whether it's picking the wrong guy to throw too, or throwing a pass just a little off-target, or not calling an audible into something that will work, his game has been off.

Dallas has two weeks to get this fixed.