The Saints beat up the Cowboys in almost every way possible on Sunday, except for one - special teams.

Share All sharing options for: Cowboys Special Teams Only Ones Actually Special

If only the rest of the Cowboys units were as good as the special teams. In an embarrassing blowout against the Saints, the Cowboys special teams once again proved their worth, earning our "teammates of the week" award.

Dwayne Harris is the best special teams player in the league right now. Why? Because he's special in two major categories, returning kicks and covering kicks. He's a true two-way player. Last night he was first down the field covering a punt and because of that recovered Darren Sproles' fumbled punt. He was also a factor on the onside kick the Cowboys were successful in recovering (more on that later). In addition, he returned five kickoffs for 121 yards. He never did break one, but a couple of times he was close.

Chris Jones had a nice game punting. He average 50.4 yards on 8 punts, with a net of 48.1, which is excellent. Quality punts plus good coverage equals almost no return yardage for the Saints. Jones also dropped four kicks inside the 20.

Dan Bailey was true on on a 37-yard field goal and all three kickoffs were touchbacks. The other kickoff was a recovered onside kick.

About that onside kick:

Credit goes to Dan Bailey, who set it in motion. Then to Dwayne Harris and Cameron Lawrence, who converged on a Saints player to make sure he didn't recover it. 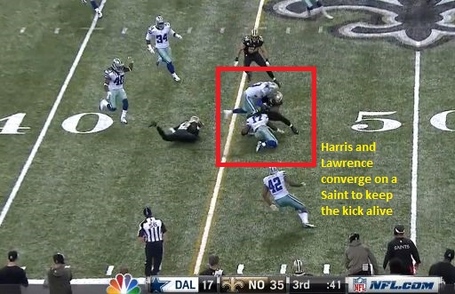 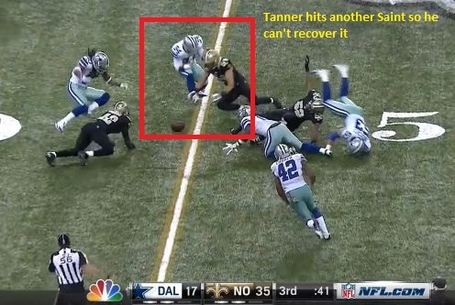 The ball finally ends up under Cameron Lawrence for the recovery. 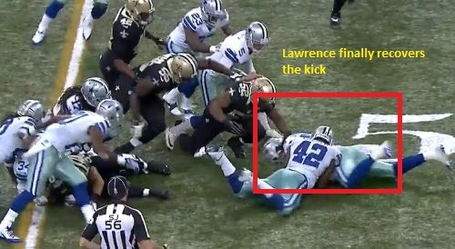 Even though the Cowboys got their clocks cleaned by the Saints, at least the special teams played well... again. Rich Bisaccia has put together one heck of a special teams.