Another Week, Another Cowboys Defensive Line

The Cowboys' personnel carousel along the defensive line has reached historic proportions.

Share All sharing options for: Another Week, Another Cowboys Defensive Line

"We feel like defensive line is a position of strength for us," Jerry Jones said in April this year. At the time, he had a defensive line in mind that would have looked roughly as follows:

That in itself is not news, of course. But the extent of the Cowboys' revolving door policy along the defensive line may be. Last week, Todd Archer of ESPN Dallas reported that since May 16, the Cowboys had signed, traded, acquired, put on injured reserve or released 28 defensive linemen.

But that was last week. This week, with the releases of Jason Vega and Caesar Rayford as well as the signing of Corvey Irvin, that number has gone up to 31.

Even more telling than the number of transactions is the actual number of players who have taken snaps for the Cowboys in the first ten games of the season. So far, 17 defensive linemen have played in the 10 games this season:

Care to take a guess how many NFL teams running a 4-3 scheme this year have fielded 17 defensive linemen?

To give you an idea of just how much of a statistical outlier the Cowboys' issues along the defensive line are, I looked at the data from 2008 through 2013 to determine how defensive linemen on teams running a 4-3 defensive scheme had taken snaps for their team over the course of an entire season. Here are the results in visual form: 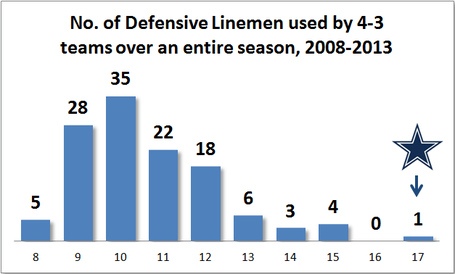 The clear outlier in this six-year overview are the Cowboys, who have cycled through 17 defensive linemen so far this year - and that's not counting players like Ratliff or Crawford who didn't take a single snap this year.

Jason Garrett doesn't want to use injuries as an excuse for the performance this year, but acknowledges that they have played a role:

I don't have back-data beyond 2008, but I'm confident that the Cowboys' defensive line number will remain an outlier regardless of how far you go back - and I'm also confident that with six more games to play, the number is not going to remain at 17.

At the same time, and this is a great credit for the players and the coaches involved in this year's effort, the production from the "New Guy" defensive line is slightly ahead of last year. Here's how this year's production over ten games compares to the first ten games of 2012:

For a bunch of no-names, these are good numbers. But these are not world-beater numbers. Far from it. And what these numbers do not show are the increasingly long bouts of highly inconsistent performances by the D-line.

It is what it is: the Cowboys' personnel carousel along the defensive line has reached historic proportions; the fact that the performance hasn't also reached historically low levels should be cause more for surprise than alarm.