The Cowboys gave their star QB a big contract and things looked good for a while, but a recent slump has people questioning #9.

If you don't think that Tony Romo's play has fallen off dramatically over the last month or so, then you just haven't been paying attention. Ever since the Denver game, Romo's stats have not been the same. The biggest area of concern is his completion percentage. Last week, before the Saints game, I noted just how far that has fallen.

Up through the Denver game, his completion percentage was 72%. Since that game, it's been 59%. And it's not all on dropped passes, bad route-running, or pressure - as we saw last week, too many times Romo's making the easy catch into a difficult one. When Romo is on he's almost always leading his receiver to space, lately he's been late with some passes.

Before anything else, for a quarterback to be consistently successful, he has to be accurate. Romo usually is but lately that's not the case. On Monday, I posted about a couple of plays concerning Romo, one where he was just a tad late on a pass to Cole Beasley that was the difference between punting and continuing a drive. The other was a terrible read and throw to the wrong receiver. After a review the All-22 film this morning, I found plenty more examples of Romo either being off with his passes, or making bad reads.

Before I go any further, this is in no way an indictment of Romo as the sole problem with the Cowboys offense, later I'll show you more problem areas. But there's no doubt Romo is one of the major problems right now.

PLAY 1: On this first play I won't ding Romo too much, he was playing it safe near his own goal line. But here was an opportunity to get the ball into the hands of Dez Bryant while single-covered and let him do something with it. The Cowboys actually motioned Dez into a stack on this play so he would be the slot receiver. For whatever reason Romo doesn't trust himself or Dez. 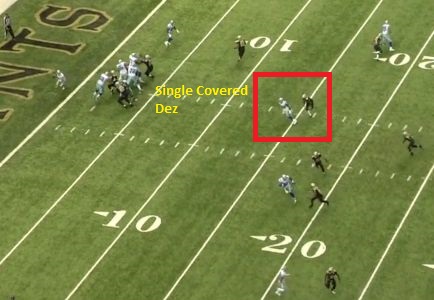 Another view from the defense perspective. If Romo leads Dez, he may pick up the first down and continue the drive. Instead the Cowboys punt from deep in their own territory after Romo basically throws it way a few seconds later. 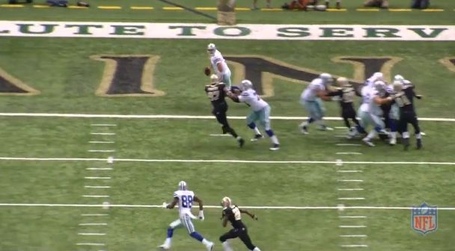 PLAY 2: On this play, Romo gets Cole Beasley wide open crossing over the middle. Here's where being accurate really counts. Romo's pass is a completion but Beasley has to dive forward to catch the ball and goes to the ground. If Romo had led Beasley across the middle (see arrow below), Beasley catches the ball on his feet and has the opportunity to make a big play. Just a little bit of error in accuracy can greatly change the dynamics even if you complete the pass. 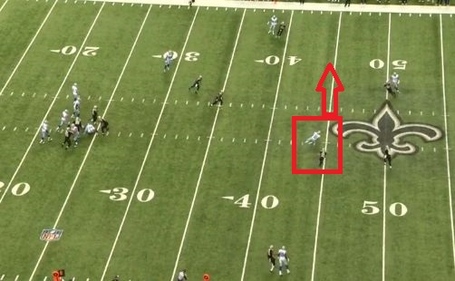 PLAY 3: Remember this play? Kind of got lost in the blowout, but here Dez Bryant has beaten the double team by splitting the safety and the corner and has a step on both of them. Romo sees this and launches the ball. But he's inaccurate, over-throwing Dez and leading him towards the outside when it should had led him inside. A huge missed opportunity for an easy touchdown that would have made the score Cowboys 17 - Saints 28. 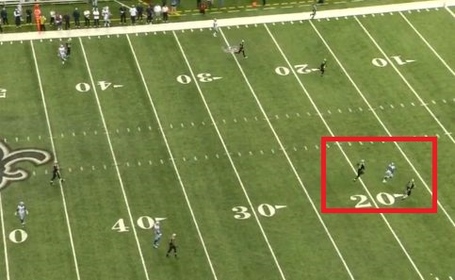 Play 4: This play is a little tricky so stick with me. In the red box below you see Dez Bryant. What you also see is the man covering him leaving Dez and heading inside to make an interception on Jason Witten (end of arrow). It's like Rob Ryan knew that in that formation at the spot on the field, Romo always goes to Witten on an out and had the corner jump it. If you notice Romo (yellow box) still has the ball in his hands and hasn't even started his throwing motion yet. He should have seen this happening. He goes ahead and throws it to Witten anyway. 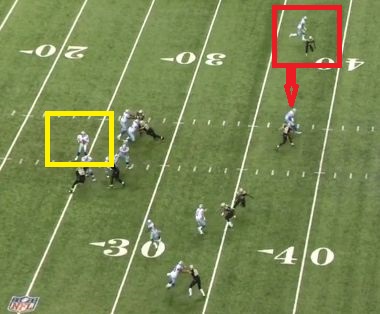 Now remember, the corner is leaving Dez before Romo is in motion to throw, he's not leaving because of the throw, but just from the mere fact Romo is looking at Witten. Now look what Romo has if he just holds the ball and instead of going to Witten, he goes to Bryant. This isn't the easiest play for Romo to read, but if he does make the read the Cowboys have a HUGE play. 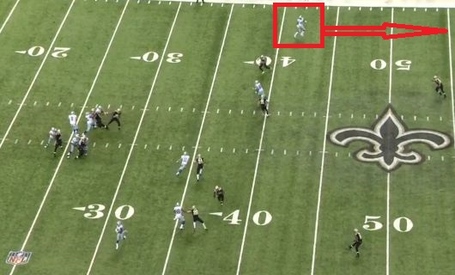 PLAY 5: Here's another example of Dez Bryant receiving double coverage (yellow box), a situation that the Cowboys have to take advantage of to win. On this play it sure looks like they get what they want, single coverage on Terrance Williams deep with no safety help (red box). Williams is coming uncovered and has a lot of the middle of the field to work with, but Romo never sees him and holds on to the ball. 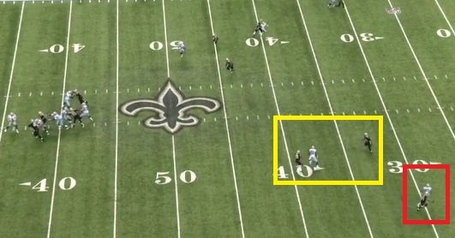 PLAY 6: This play came after the rout was already on, but seems to be more indication that Romo just isn't seeing the field and is locking on to receivers before the play develops. The Cowboys need a first down on third down, you can see the first down marker at the top of the pic (black arrow). Dwayne Harris is wide open for a sure first down and Witten looks very open down the middle (yellow box). Instead, Romo goes to TWill (red box) who is actually pretty well covered. 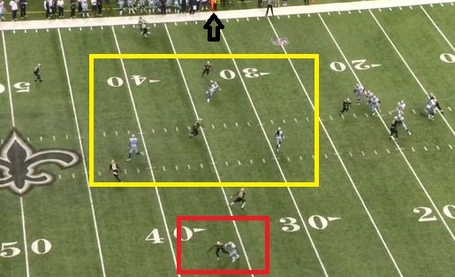 These are not all easy plays. Some of them are easy - Romo's ability to accurately lead his receivers recently has eluded him, something he usually does routinely. Some of them aren't easy - seeing the open guy when a rush is coming and making an accurate pass. In the past, Romo has done these things more times than not. That's why the Cowboys gave him a huge contract extension. But over the last month, Romo is slumping, the film don't lie.