At Least One Cowboys Play Worked Against The Saints

We've been talking about a lot of negative things this week, so let's look at one play that did work.

Share All sharing options for: At Least One Cowboys Play Worked Against The Saints

Test how precise your football knowledge is by playing the Precision Play of The Week for a chance to win Super Bowl tickets – brought to you by Gillette Fusion ProGlide, precision comfort, even on sensitive skin.

We'll take a moment to get away from all the doom and gloom from the Saints debacle and highlight a play that was run with precision, and a player who has been making the most of his rookie season. Third-round draft pick Terrance Williams is having a breakout season in his rookie year, at a position that usually takes a few years to get acclimated to in the NFL.

The Cowboys tried to make a mini-run in the second half of the Saints game and the impetus of that was a touchdown strike to Williams from Tony Romo. It's true I've been giving Romo a hard time on this site recently, but on this pass he was right on the money.

Williams and Romo ran this play just like it was drawn up. It started with Williams running what looks like an ordinary slant pattern, Romo maintains the subterfuge by staring Williams down and drawing up the corner. 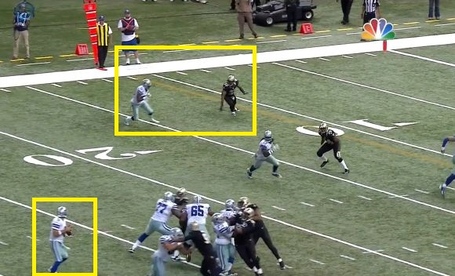 Once Williams has the corner biting on the slant, he plants and heads back up field to the corner of the endzone. Precision route-running sets this up beautifully. 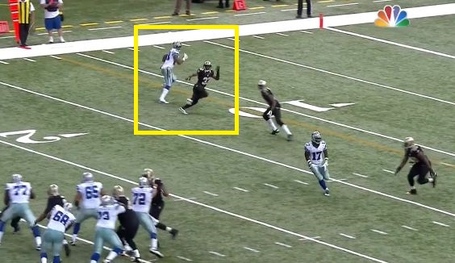 Romo is already watching this happen, his staring down of Williams is part of the sell on the double move. Once he sees Williams clear, he arches a pass that is right on the money, dropping right into Williams' hands in the endzone. 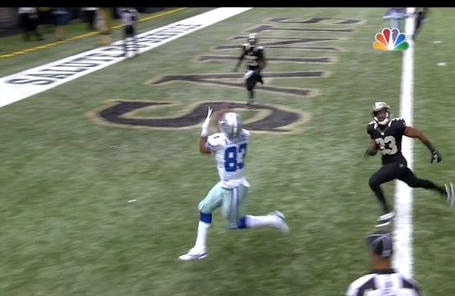 Here's another view from Romo's perspective. 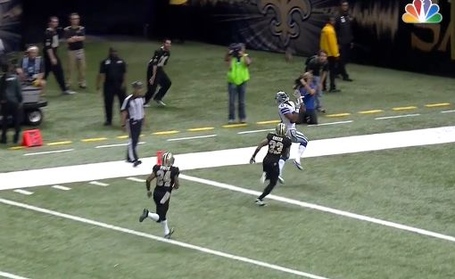