As the Cowboys complete their preparation for their Week 9 match up with the Minnesota Vikings, let's look at a few things we should expect to see from the The Purple & Gold Sunday afternoon.

When you think about the Vikings, a couple of players immediately pop into your mind. First off, of course, is their best player, RB Adrian Peterson, the best RB in the NFL and one of the few true workhorse backs left in the modern NFL, and secondly, you think of Jared Allen, the veteran DE that has been in the running with Cowboys DE DeMarcus Ware for the NFL sack lead several times.

However, the Vikings have several guys on both sides of the ball who have shown the ability to make plays. Guys like TE Kyle Rudolph, WR/KR Cordarelle Patterson, & WR Greg Jennings on offense, along with Chad Greenway, and Kevin Williams on defense have this ability to impact games and must be accounted for by opponents.

Let's take a look at a couple of ways the Minnesota Coaching staff puts their guys in position to make plays.

The first play I want to look at, is a red zone possession in the Vikings game against the Green Bay Packers in Week 8. I tried to focus my studies on this team to games when Christian Ponder was playing QB because he was taking the reps all week in practice, and it was finally announced by Head Coach Leslie Frazier that Ponder would be the starter against Dallas. 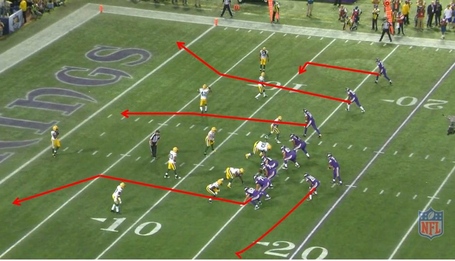 Here we have the Vikings in 11 (1 RB, 1 TE, 3 WR) Personnel, with Trips to the Right, and the TE and RB set to the left which is the short side of the field. The Packers are countering with a Nickel (2 DL 4 LB 5 DB) look, with a pre-snap zone look (Near CB stays on side with no WRs.)

The scheme by the Vikings is actually pretty simple, and features combinations we have seen over and over this year. To the trips side, we see a Smash or Smash-7 combination between #1 and #2 on that side. This combination puts a vertical stretch on the underneath zone defender (CB in Cover 2, Nickel in Cover 3 or4) and gives #2 leverage on the deep zone defender (S in Cover 2, CB in Cover 3 or 4). This is a basic route combination that every high school, college, and pro team that ever throws a pass will have in their game plan, and here we see it by an NFL team in the red zone. The inside WR on the trips side runs a seam route up the hash. This route is designed to put pressure on a Mike LB in Cover 2, or a safety in Cover 1 or 3 (as Calvin Johnson illustrated on his final catch in week 8).

Then on the closed side of the formation we have a Flat-7 combination between TE Kyle Rudolph and Peterson out of the backfield. This puts the same sort of stretch on the defense that the smash combination does, and in this case, it puts 2 of the better play makers on their offense in combinations together, with the majority of the defenses attention placed on the Trips side due to numbers.

This gives Ponder the opportunity to look to his left, read a relatively open area, and get the ball to either Rudolph or Peterson with an opportunity to try to go score. 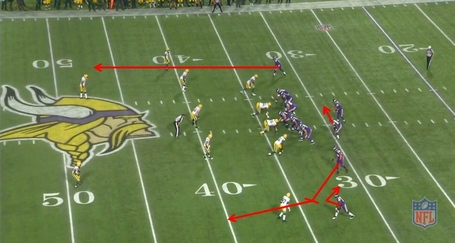 This look, by the Vikings, again vs Green Bay, sets the Vikings in a 2x2 Far Set with the TE to the right and the RB to the left.

The initial action post snap looks like a smoke screen to the #1 WR to the open side. Peterson crosses Ponders face to create defensive flow with the run action. The #1 WR runs his smoke route, taking one step up field, before turning his chest back to the QB and running back behind the LOS toward the core of the formation.

The nuance of this play comes from the #2 WR to the play side. His initial action looks to the defense like he is aiming to block the CB, however, as he approaches the CB, he breaks his route up the field, with the idea that the corner will break up field to make a quick tackle on the smoke screen, which when combined with the safety's reaction to either the run fake, or the screen action, will create a large hole in a zone coverage, or plenty of space for Patterson vs man coverage and will leave an easy throw for Ponder for a chunk play to a guy with lots of ability after the catch. 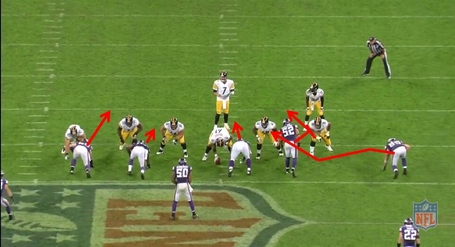 Here we see the Lions in a Nickel (4 DL, 2 LB, 5 DB) with LB Chad Greenway (52) sugaring the open side B gap. The pressure look we see here is very similar to the stunt we saw the Giants execute in week one when the LB took out Doug Free to allow the DE to break inside and take on the RB.

Here Greenway is going to rush directly at the Steelers' LOT who will be in his kick-slide preparing to block DE Jared Allen. Greenway is going to essentially block the LOT to let Allen run under neath to provide quick pressure. Once Greenway executes his 'block' on the OT, he rolls off, almost like a power forward in basketball executing a pick and roll, to pursue the QB. On this particular play, the RB stepped up to block Allen, but as Greenway rolled off the OT, he took a free run at Ben Roethlisberger and was able to secure the sack.

The bottom line about this game is that the Minnesota Vikings just aren't a very good team. Ponder has big time struggles at QB, which limits their entire offense, even the great Adrian Peterson. Their secondary on defense has problems when they have all their starters, and they will be without 3 of their 4 starters on the back end this week.

We have seen this before, but if this offensive line can protect Romo early and allow him to get comfortable, I can see this being a big day for the Cowboys offense. There will be guys open, and opportunities to get them the ball, this game will come down to the Cowboys ability to execute plays, get an early lead, and attack Christian Ponder. If they are able to do those things (which they have against bad teams this year), they should win this game handily.