You've seen the stats, now see why the Cowboys allowed the Giants to successfully run the ball on Sunday but held the scoring to only 21 points.

Share All sharing options for: How The Giants Ran All Over The Cowboys But Still Lost The Game

One noticeable aspect of the Cowboys defense on Sunday against the Giants was the amount of rushing yards they gave up. But when it came to the redzone, they were able to hold the Giants down on two separate occasions in the first half, a huge turning point in the game.

On the day, the Giants ran for 202 yards and averaged 6.7 yards per run. The key though was holding Eli Manning to 174 yards passing and averaging a paltry 5.8 yards per attempt. The Cowboys ran a very basic defense for a lot of the game. Basically, they begged the Giants to run the ball, they played two safeties over the top to protect from the long pass, and waited for the Giants to make a mistake or smothered them in the redzone.

Below is a graphic that shows the Cowboys base defense for much of the day. Notice the red box with the two-deep safeties. Dallas wasn't going to allow Victor Cruz (or Rueben Randle) to get deep, the Giants were going to have to throw underneath. The Cowboys played a lot of zone with the deep safeties and man with the corners/safeties/linebackers underneath.

The flip side of this formation is the yellow box. The Cowboys have 6 guys in the box, maybe 7 if you want to throw the slot defender into it. Either way, the Cowboys were playing deep safeties, they used a dime package for some of the game and basically conceded the running game. Now, Jason Garrett and the team wouldn't phrase it that way. They probably feel they should have contained the run in this alignment, but the truth was the Giants line handled the Cowboys front four in run blocking, their fullback ruled our linebackers, and the Cowboys were not great with gap control. And, maybe most importantly, they certainly missed Sean Lee. 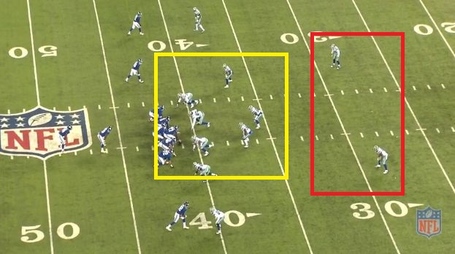 All of this changed once the Giants hit the redzone, specifically around the 10-yard line. Notice below how they play single safety high, and have 9 players in the red box. Part of that is because of the Giants formation, here they are using a heavy set where outside the redzone they used a lot of three-receiver sets. But even when they did use more receivers in the redzone, Dallas pressed the box and moved safety help closer to the line. 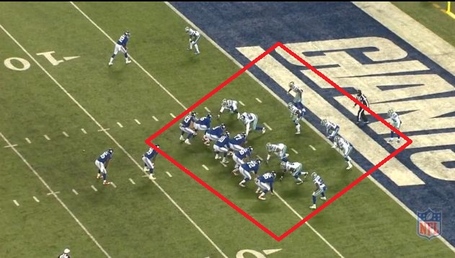 All those guys in the box helped. On this play, two guys meet the fullback in the backfield, meaning one of them will be free to get to the ball carrier (see red box below). Outside the redzone, the fullback was usually singled up in a linebacker and was winning, here Orlando Scandrick makes the fullback make a choice, and Kyle Wilber fills the gap and makes the tackle. 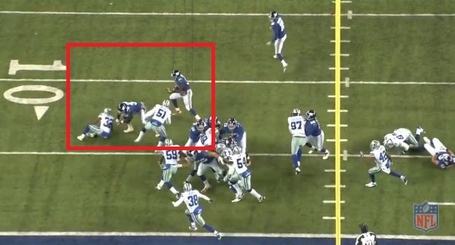 One other note on a redzone run by the Giants. On a crucial third down, the Giants ran a draw. Jason Hatcher must have known it was coming.  Unless the Cowboys were going to drop him into coverage, which they never do, he read the formation and the play.  Notice him in the red box below, instead of rushing forward like the rest of the line, he stands up and actually starts to back away from the play. 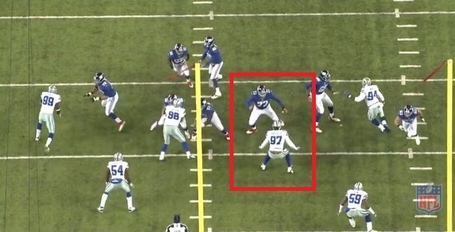 With Hatcher back off the line a few yards, the guard is forced to go out and try to block him but by that time the running back is in the same area, Hatcher causes the congestion while DeMarcus Ware (right side of red box) peels back off his man and converges with Hatcher for the tackle. 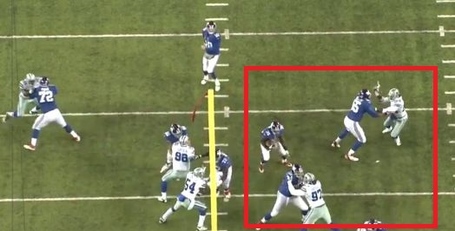 Here's another play in the redzone where the Giants used four receivers, three of them in a bunch on the left side of the line. The Cowboys revert to their two-deep safety alignment but still manage to push eight guys (red box) towards the line, even though the outside guy at top is not really in the box. 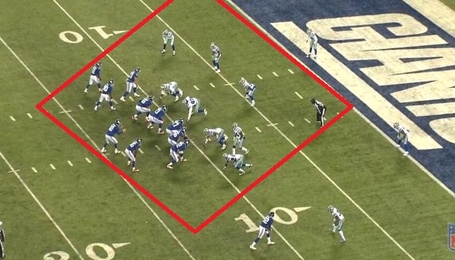 The importance of this play is to show how well the Cowboys played their coverage scheme in passing situations, basically blanketing players or only allowing the underneath players any room. The Giants receiver in yellow is the only open option but even if he catches it he's got two Cowboys defenders ready to make the tackle. Still, this is the option Manning should have taken. The other three receivers (red circles) are totally covered. Eli ended up throwing the ball away on the play. 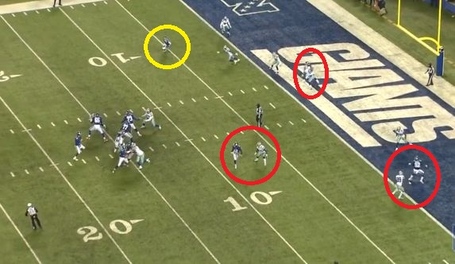 For much of the day, Dallas invited the Giants to run the ball. They gve up big yards on those plays but once New York got to the redzone the Cowboys were able to bring defenders up to stop the run. They also did a very good job of playing deep zone with the safeties to keep anything long from being completed and were fairly competent in their man-to-man coverage underneath.

That's how Dallas let the Giants run all over them but still hold them down to 21 points.