As the Cowboys end their short week in preparation for their Thanksgiving Day match up with the Oakland Raiders, lets look at a few things we should expect to see from Dennis Allen's team on turkey day.

Since the last few years before the passing of the late Al Davis, the Oakland Raiders have been a much maligned team throughout NFL circles. Many of the contracts that Davis gave out late in his life put the Raiders in a bad position salary cap-wise and has really limited GM Reggie MacKenzie and Head Coach Dennis Allen as they attempt to rebuild the team. Let's look at some schematic things we'll surely see Thursday afternoon.

Here we see the basic Power scheme from an offset I look with Jennings and full back Marcel Reese against the Tennessee Titans. There's nothing spectacular here, pull the backside guard to led the back through the hole, and the full back kicks out the end man on the LOS. In the running game, its all about numbers. If the offense can get more blockers at the point of attack than the defense can account for, they will be able to have success in the run game. 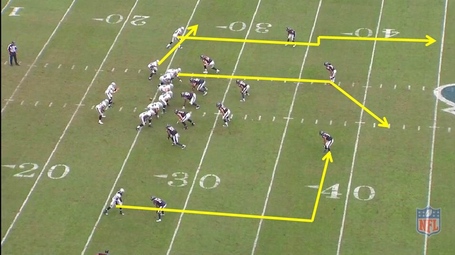 Here we see the Raiders in 21 Personnel with FB Marcel Reece in an H back alignment. And the raiders are looking to attack the Texans defense down the field. The key to this play is the Post-Stutter Go combination by the TE Mychal Rivera and WR Rod Streater. The post route by Rivera occupies the safety, and once the CB even hesitates on the stutter by Streater, the ball is going that way with a chance for a big play. Look for the Raiders to try to give QB Matt McGloin opportunities to make plays down the field in 1 on 1 situations with Streater after establishing the run game early.

The Raiders defense has struggled in many facets this year, including defending the pass (25th in NFL in Passing YPG), however one bright spot has been the play of Lamarr Houston rushing the passer. Let's take a peak at how the Raiders generate chances for Houston to get shots at the QB.

Here we see that the Raiders have 2 down linemen and 4 guys standing up as "spinners" or move rushers. There's nothing especially exotic about this look, just Cover 1 behind a 5 man pressure. However, when 4 of the 5 rushers are coming from the Right A gap to the Left end, you are very likely to end up with an unblocked defender, in this case Houston ends up unblocked off the defenses left end, and is able to sack Houston QB Case Keenum for a loss of 15 yards.

There is no doubt this is a game the Cowboys should win, especially considering that this is a short week, with the opponent playing a rookie QB who's only started 2 games in the NFL, and giving up their Wednesday practice to travel to Dallas. If the Cowboys are going to make a run into and through the playoffs, they must win this game. This Cowboys team has shown the ability to take care of business against the teams they should beat so the hope is that that trend will continue.