Three Moments That The Cowboys' Win Hinged On

Every NFL game has crucial points that can greatly impact the outcome. Here are three that were major factors in Dallas' win over Oakland.

Share All sharing options for: Three Moments That The Cowboys' Win Hinged On

In the NFL, as in no other sport, each play is very important. With only 16 games in a regular season, each win or loss is much bigger than in other sports with many more games to decide the fate of the team. And there are only 110 to 120 plays in an average NFL games.

As a result, the impact of individual plays can go a long way in deciding whether a team wins or loses a game and one or two games can be the difference in whether a team makes the playoffs. The Dallas Cowboys' 31-24 win over the Oakland Raiders had a handful of such plays that could have cost Dallas the win had they gone differently. Here are three that I think were the biggest.

The first is actually two consecutive plays. After the disastrous kickoff fumble by Terrance Williams had staked the Raiders to a 7-0 lead, the Cowboys were having a problem getting on track offensively. It's possible Tony Romo's flu symptoms were affecting his play but for whatever reason, the team was failing repeatedly to move the chains. As the first quarter drew to a close, Dallas had to punt yet again. After an ill-advised fair catch at the five yard line, Oakland had their own disaster. The exchange between center Stefen Wisniewski and quarterback Matt McGloin was fumbled (Wisniewski was charged with the fumble in the stats), and then running back Rashad Jennings compounded the error by trying to pick the ball up and run with it.

Kyle Wilber was there to recover, but what was a little harder to see was the role Jason Hatcher played. Hatcher reached in and knocked the ball out of Jennings' hands, allowing Wilber to come up with the fumble. 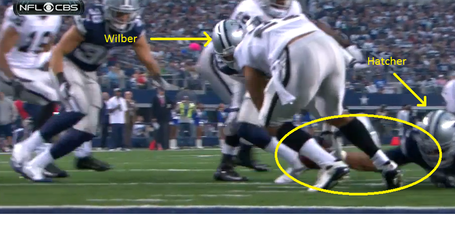 If Hatcher does not go to the Pro Bowl then there is no justice. He has been the glue that has allowed Monte Kiffin and Rod Marinelli to patch together the defensive line and he says himself that he is only playing with one arm. This is just another example of how he is so important to his team.

The next play was the first of DeMarco Murray's touchdowns. And what was so important about that - well, just look. 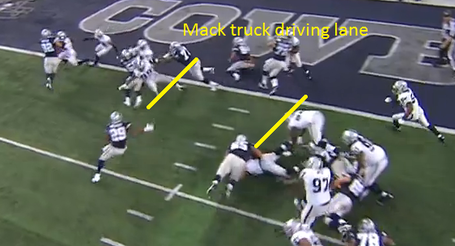 If you are old enough, you may have gotten flashbacks to a day when the running back wore 22 and these kinds of holes were the norm.

Those two plays together tied the game and were very important in keeping the game from getting too far out of hand. And remember, the eventual margin of victory was seven points.

The next play was very close to a disaster for Dallas. After falling behind 21-7, the Cowboys' offense took the field with 1:56 on the clock and a chance to cut into the lead and get some momentum back. Given the way things had gone so far, the odds looked pretty long they could accomplish anything. But Romo suddenly got back to his old self and got the team moving. He got the ball to the 32 after a long pass to a fired-up Jason Witten. He completed a short pass to Dez Bryant and Mike Jenkins, who was doing his best to get revenge on the Cowboys for the ugly breakup with the team (after his pioneering of the technique of rehabbing away from the team, later perfected by Jay Ratliff), knocked the ball loose. It looked like another crushing mistake for Bryant, with Jenkins wrapping him up so he could not get back to the ball, and three Raiders zeroing in to recover and snuff out the drive.

Bryant got his fat pulled out of the fire by a player who deserves some serious consideration for the team MVP this year. 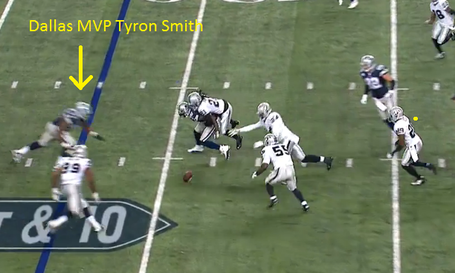 That streak coming in to save the day is a 318 lb. tackle. Tyron Smith's athleticism and sheer determination got the ball back, kept Bryant from having to deal with possibly losing the game for his team, and helped the team maintain momentum that would lead to 24 unanswered points and the victory.

The last play I want to highlight was much less dramatic but an example of something that can be so important, and that players often fail to do. Dallas has forced Oakland to punt but since the Raiders had gotten to their 45, the Cowboys wound up with the ball deep in their own territory. And after an offensive pass interference call against Jason Witten (one of several, shall we say, inconsistent calls made during the game), Romo was facing a third and 13 from his own 10. The Cowboys were still down seven points, and had they failed to convert, they risked letting the Raiders regain momentum. Romo had time (despite the rather amazing sight of Doug Free getting knocked backwards - in the air) and found Terrance Williams. Look closely at this shot of the reception as he secures the ball. 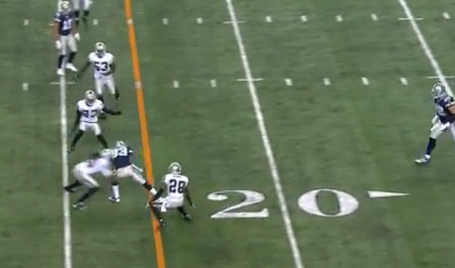 Dallas needed 13 yards. Williams had run a 14 yard pattern. This was smart, precise route running by the rookie, and to a large degree made up for his fumble of the opening kickoff. Instead of kicking the ball away to Oakland, who would have likely had the ball around the 50, Dallas had a first down, and Romo would march the team relentlessly down the field to tie the game. It was hardly the biggest play of the game. But it was very crucial to the team eventually winning, despite it being easy to overlook.

Those were three plays that could each easily have cost the Cowboys the game if they had gone differently. But through a combination of talent, determined play, and a bit of luck, the outcome of each was in Dallas' favor.

Now it is a four game season for the Cowboys. The past two weeks they have faced games that they needed to win and they did. There is another coming up a week from Monday in Chicago against da Bears. Here is hoping that the crucial plays go their way again.