Cowboys Offensive Woes Boil Down To One Thing

The Cowboys offense over the last few games has slowed down dramatically. Why is that? A look at some of the failures in the Vikings game offers a clue.

Share All sharing options for: Cowboys Offensive Woes Boil Down To One Thing

The old ball coach John McKay was a funny guy, always ready with a quip. When asked once after a game about his team's execution, he said he was all for it.

I bring this up because everybody is kind of wondering what the problem is with the Cowboys offense. Is it Bill Callahan? Is it Tony Romo? Is it Jason Garrett? Do they need to run the ball more? Go downfield more often? All these theories and more have been brought up as the reason. But after the Vikings game Jason Garrett basically said it all comes down to execution. The players on offense failed to execute and this sabotaged the offense. Guess what, he's right.

I went back and looked at the Cowboys offensive drives in the Vikings game. I threw out the ones where they scored touchdowns, obviously they executed there, and the ones that really never got going, you can't execute on every drive. I also dumped the Tony Romo interception drive. What I wanted to look at were the drives that showed promise only to fail in some way. There were five good examples in the game, and the Cowboys just made easy mistakes and were outplayed in some cases, dooming their efforts.

Tony Romo throws to Jason Witten, but has to lead him inside to avoid a defender. Witten can't handle the throw (a tougher catch than normal, but one Witten usually handles). 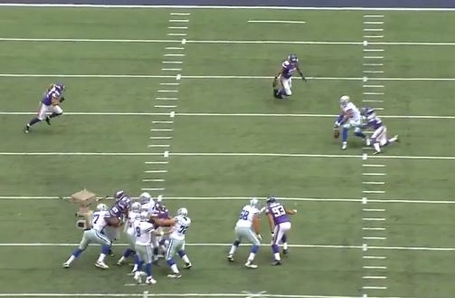 That puts the Cowboys behind schedule at 2nd and 10. After a run play that picks up three yards, they face 3rd and 7. Romo has Bryant wide open on a crossing pattern but instead of leading him out front, he throws behind him and Bryant can't handle the pass. 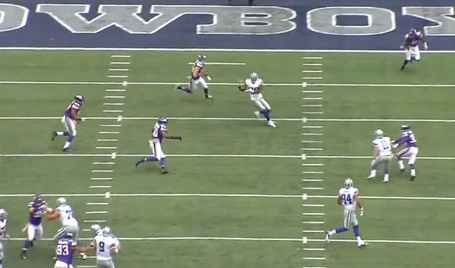 The Cowboys settle for three instead of seven. Here you have three of the Cowboys best players failing to execute - Romo, Witten and Bryant.

Cole Beasley finds himself wide open on a first-down pass, Romo leads him a little to the outside so he can turn and run to open space, maybe even scoring. Instead Beasley drops the ball. 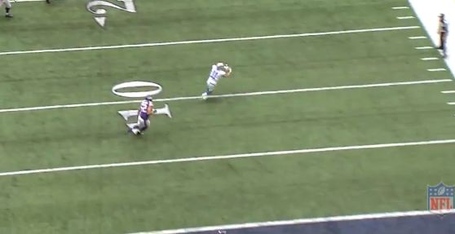 On the next play, Ron Leary and Tyron Smith get beat by a stunt and Romo is sacked. On thrid down, Terrance Williams is just breaking free towards the endzone and Romo sees him, but poor blocking by Doug Free leads to sack and Romo can't get the throw off. Another field goal. 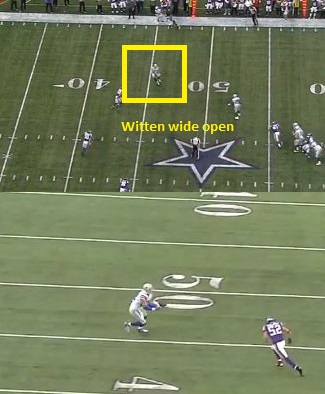 On the next play Tyron Smith gets beat badly creating pressure that ultimately leads to a sack and a punt.

The offensive line tanks. First Free gets beat badly forcing Romo to scramble out of the pocket and throw an incompletion. On second down, Leary and Travis Frederick get soundly beat on a blitz and the Cowboys lose five yards on a running play. Dallas tries to recover on third with a pass to Dez who gets a pass interference call and unsportsmanlike conduct penalty, driving the Cowboys out of FG range and into a punt.

On first down Witten got a controversial pass interference call against him leading to a 1st and 20. After a short pickup of three yards on the replayed first down, the Cowboys can get it all back in one strike as Bryant comes free on a crossing pattern. This time Romo hits him right in the hands but Dez drops it. 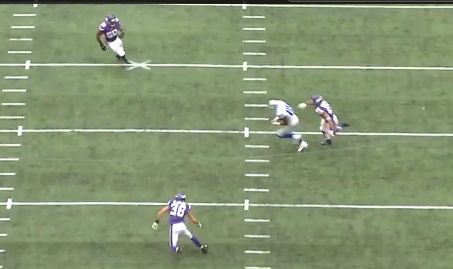 After an incompletion on third down the Cowboys had to punt.

So as you can see, the Cowboys had plenty of real opportunities to put points on the board, but the failings of the QB and receivers to hook up, and some bad play from the line, doomed them. It wasn't necessarily the play-calling, it wasn't going short vs going long, it wasn't the run vs. the pass. The Cowboys offense was working for the most part - players were open. But the players failed to execute.